Review: ASCENDER #1 Asks What It Means To Be Free

It’s hard to follow up on the successful sci-fi story that was Image Comics’ DESCENDER series. But Jeff Lemire and Dustin Nguyen are moving forward with a fantastic sequel. ASCENDER, set 10 years after the original series’ events, reveals a world where technology has been all but extinguished by the Harvesters. Now the supreme wizard known as Mother commands the civilizations throughout the former United Galactic Council. She proclaims liberation, but are her subjects really free? 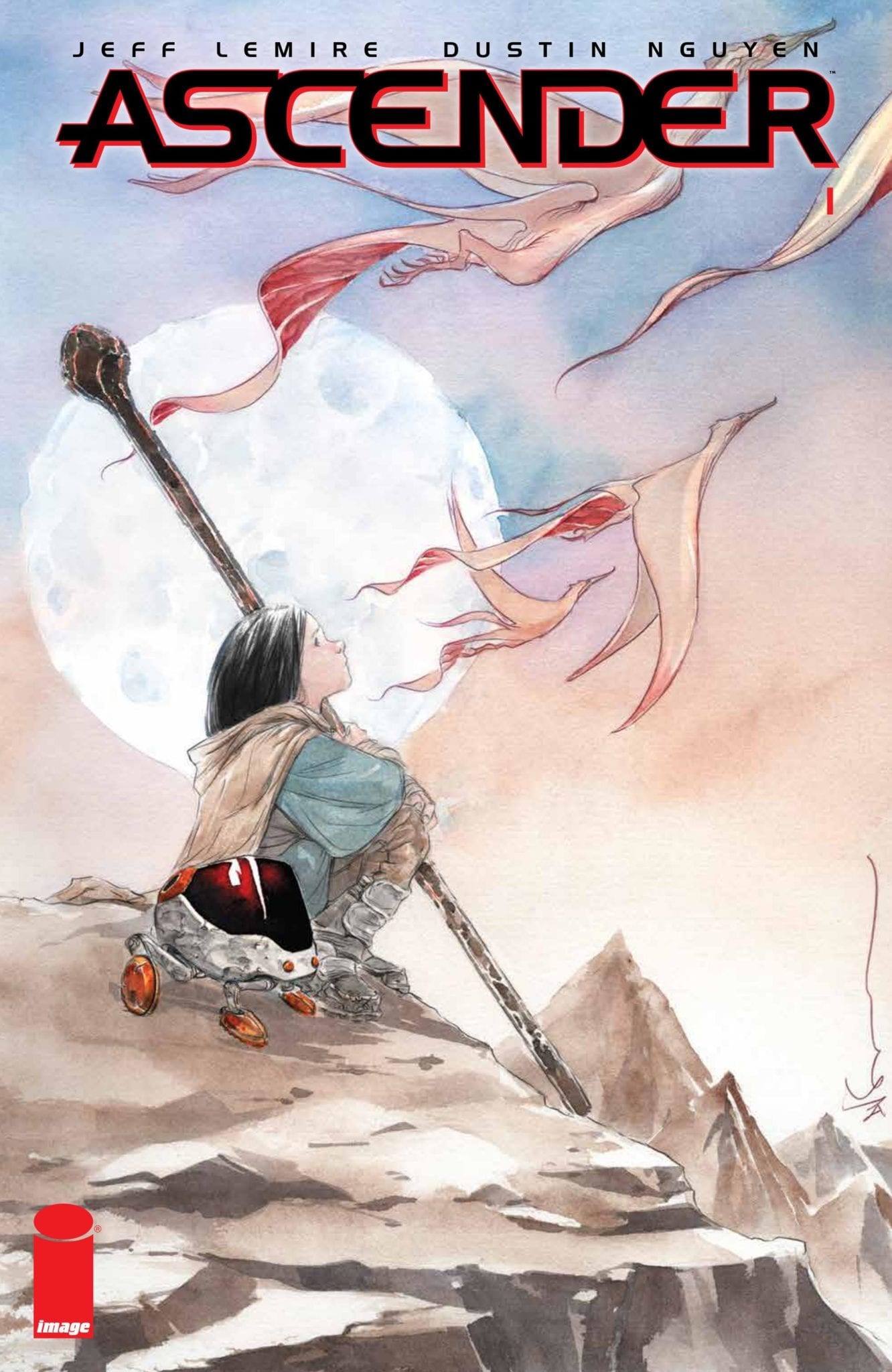 The story places its initial focus on Mother and inhabitants of the planet Knossos. After arriving in her dragonlike transport, which doubles as a spaceship to compensate for the lack of technology, Mother asks to see the Knossosian’s prisoner of war. 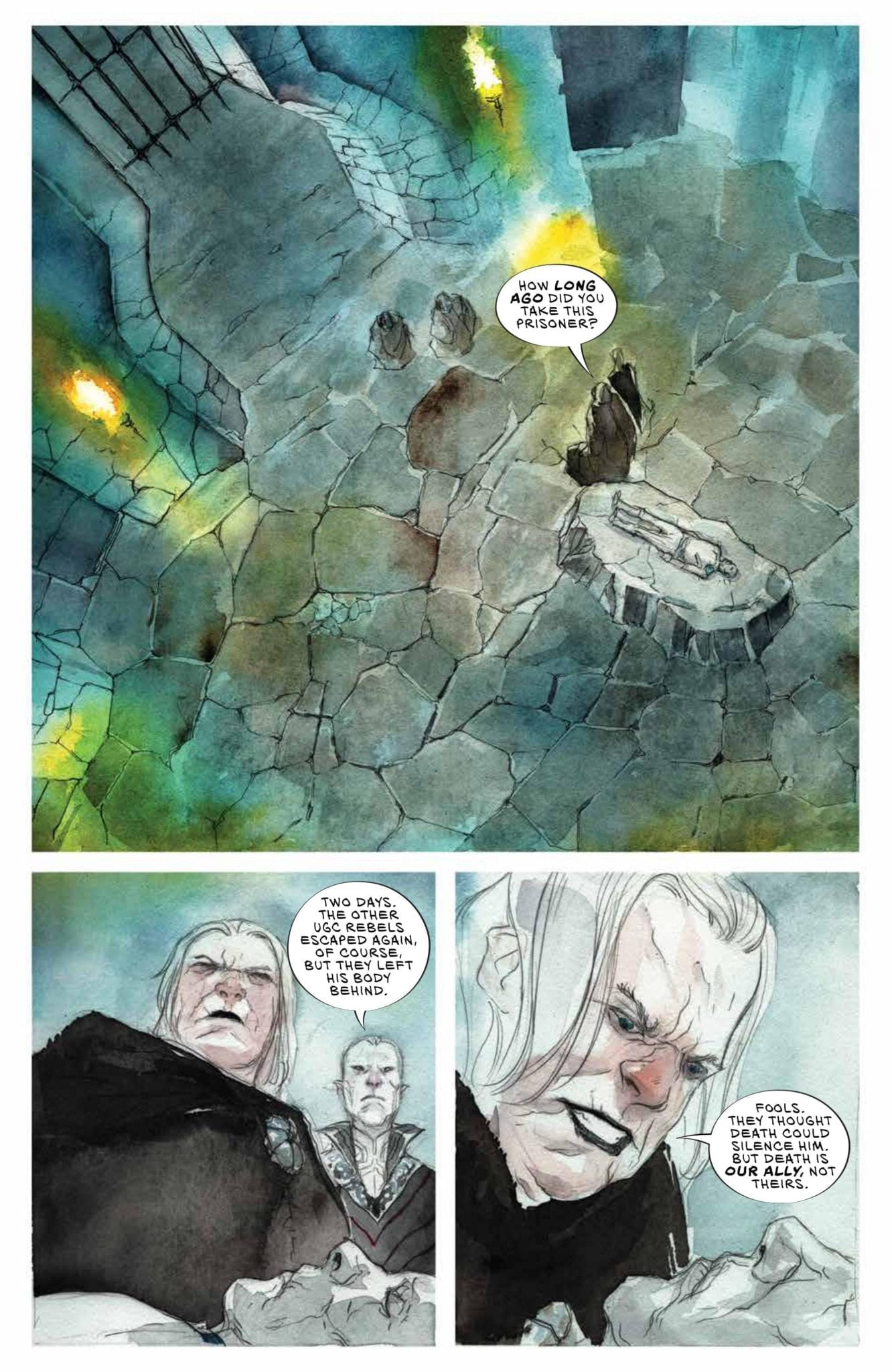 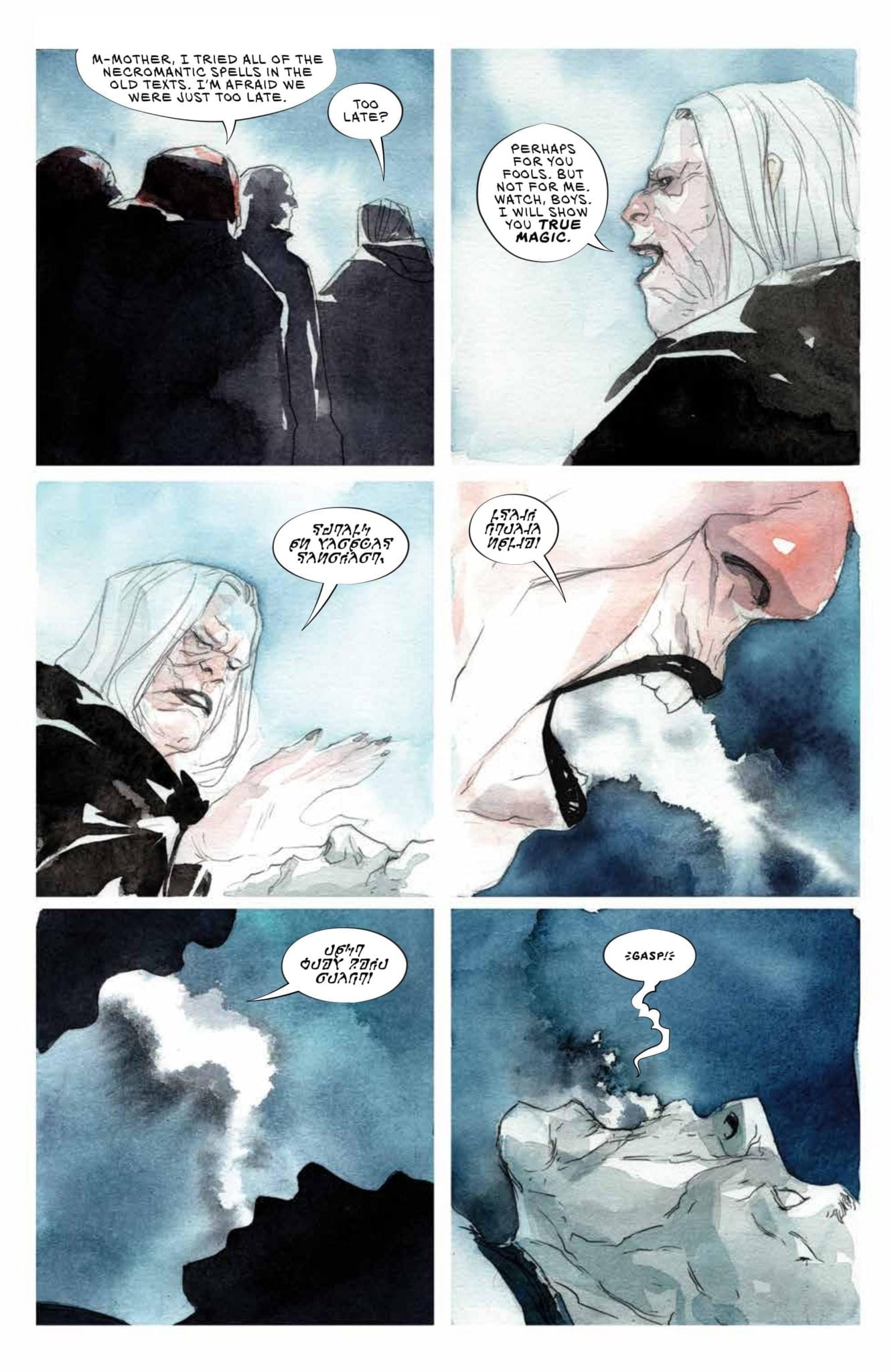 Though the captive has since died, Mother shows off her powerful magical abilities by bringing him back to life for the purpose of interrogation. One can almost feel the Mother’s horrific breath as it emanates from her mouth, infusing the corpse with life once again.

Mother’s interrogation focuses on the man’s service in the USG military and whether he knows about a supposed magic wielder protecting what’s left of it. A sense of intrigue builds as we learn of this unknown being who may hold the power to topple Mother’s forces. 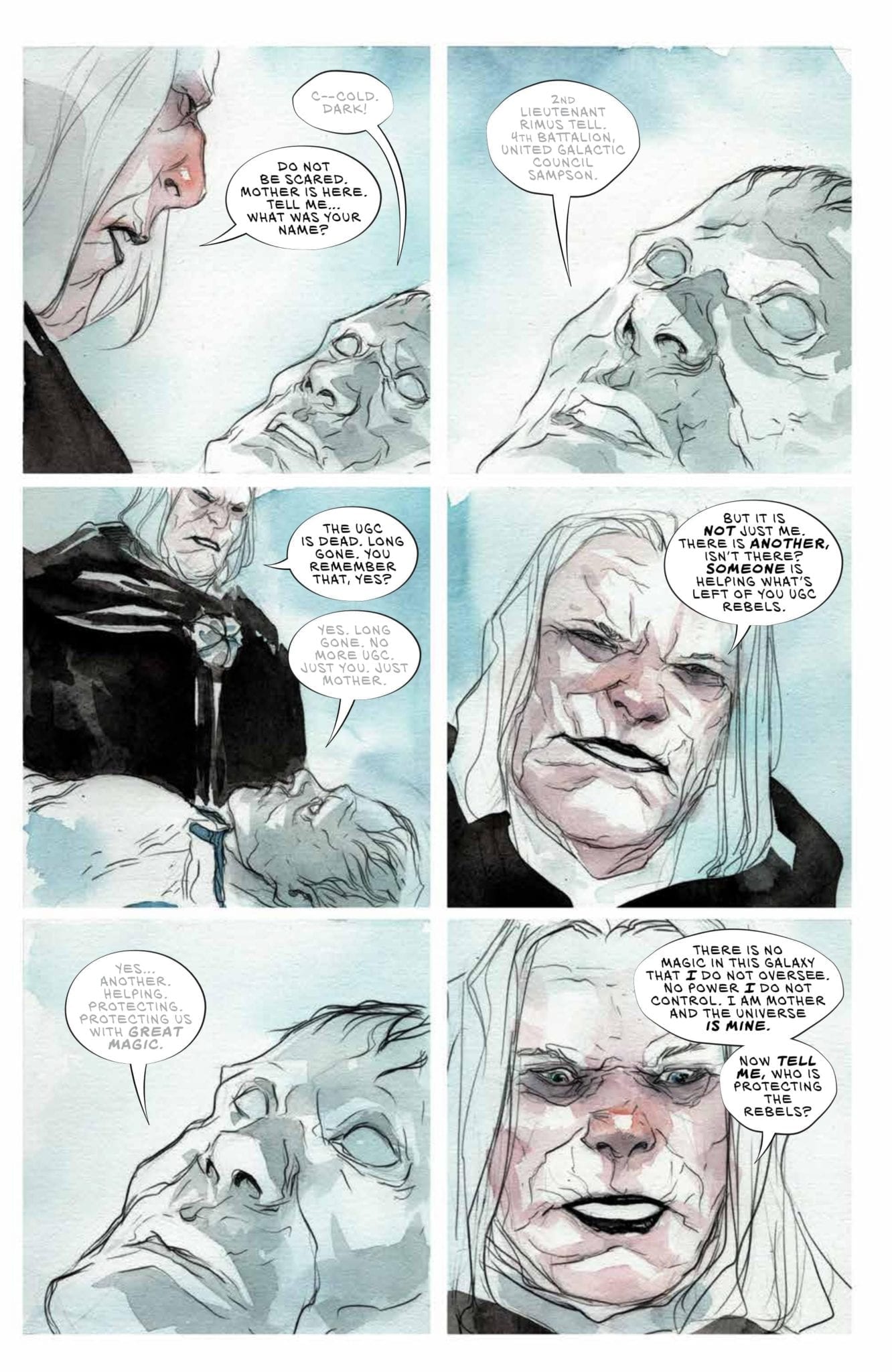 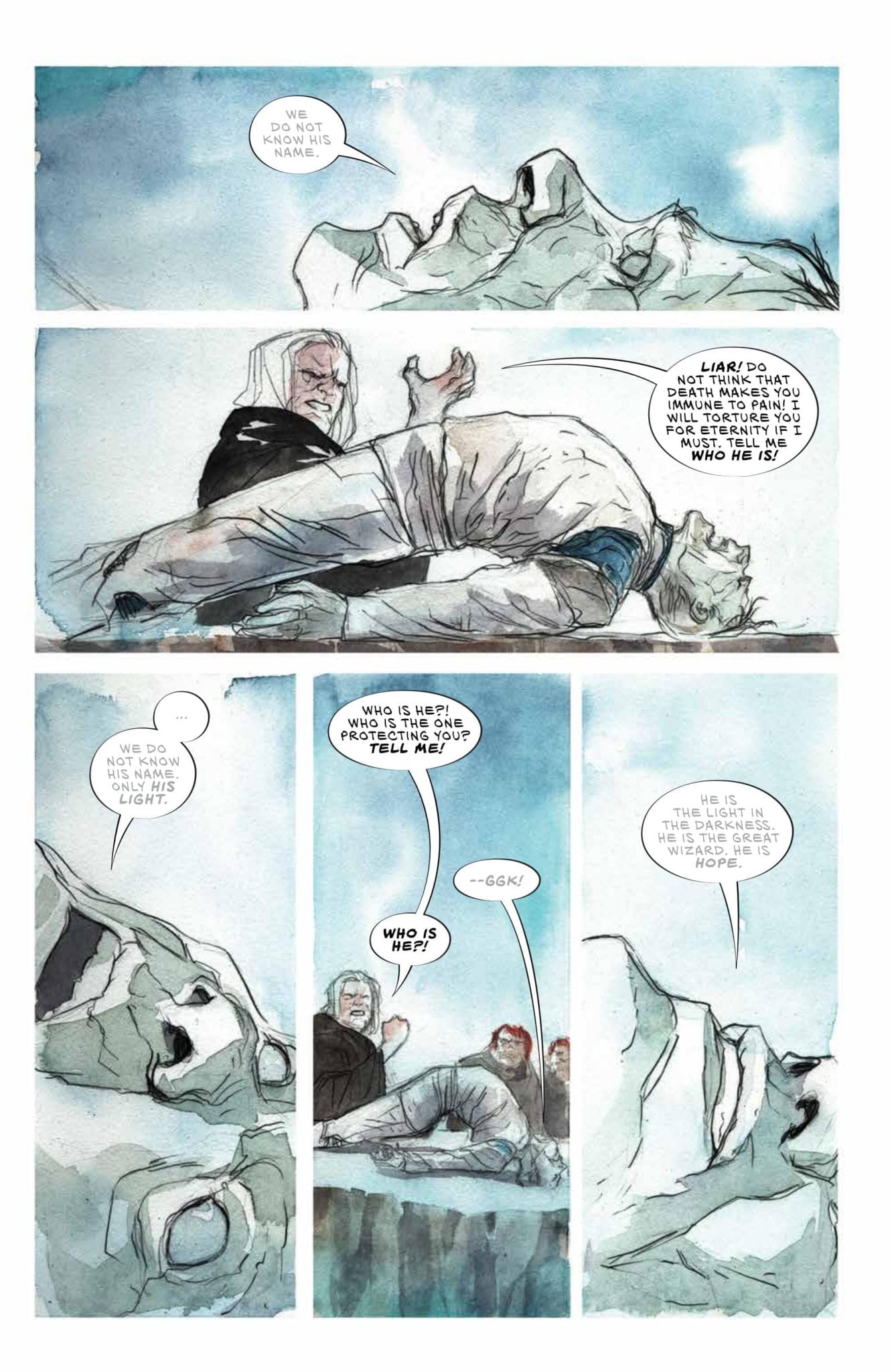 The story shifts its setting to the planet Sampson where we meet Mila, the daughter of Andy from DESCENDER. Mila and her father live in seclusion to avoid confrontation with Mother and her forces. The young girl is aware of the ever-present danger, but implores her father to let them experience human society less them remain hermits forever.

Mila yearns for the freedom to interact with the world as she sees fit. But with Mother running the show, will she be able to find it?

Dustin Nguyen’s breathtaking artwork for the cover and inner story brings life to Lemiere’s narrative. His penciling combines light sketch marks to add layers of texture to each character. And the colors help readers distinguish the transitioning environments, such as the dull grays on the icy Knossos and the bright hues of the lush Sampson.

Steve Wands’ lettering is particularly helpful in allowing readers to grasp the story’s themes. He uses a robot-like font for the winged servants of Mother, showing how they function just like the machines she so despises. But the scribbled style of Mila’s internal dialogue is  even more effective, fostering a sense of imagination and childlike wonder in the reader. It looks as if these sentences were taken straight from her diary.

ASCENDER #1 is the thrilling sequel opener fans of DESCENDER have been waiting for. By flipping the script from technology to magic, the storytellers are finding a way to unpack their surprising similarities.

Do you think this story will live up to the fame of DESCENDER? Let us know in the comments below!

A fantastic sci-fi/fantasy thriller stemming from the acclaimed DESCENDER series.Review: ASCENDER #1 Asks What It Means To Be Free