Readers last saw Arthur Curry facing down a monstrous oceanic creature on Amnesty Island, the proposed new home for his Old God friends. The hero desperately attempted to soothe the beast with his “call” ability to no avail, leaving the group vulnerable. While its motives for attacking are unknown, one thing is clear: the group needs to think of something quickly lest anyone gets hurt.

On Wednesday, September 18th, readers will find out just what the heroes had in mind. 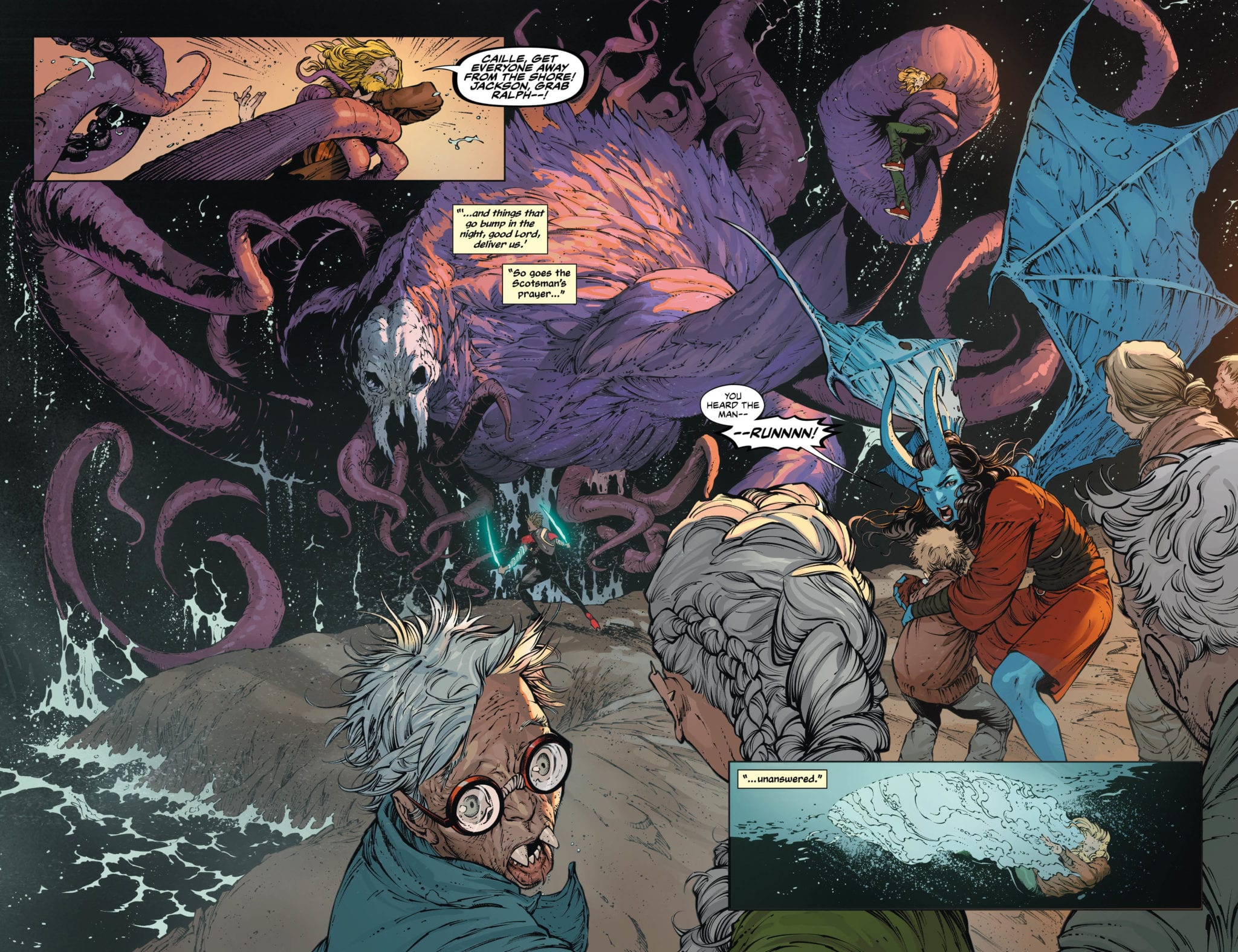 It was bad enough that the Old Gods had to face the discriminatory glances of the Amnesty Bay townsfolk when they first arrived (which was why they sought the Island’s refuge in the first place), but issue #52 brings them face-to-face with this deadly sea creature. Fortunately, they have Arthur and Jackson Hyde, a.k.a. Aqualad, on their side, both of whom jump to their defense immediately. 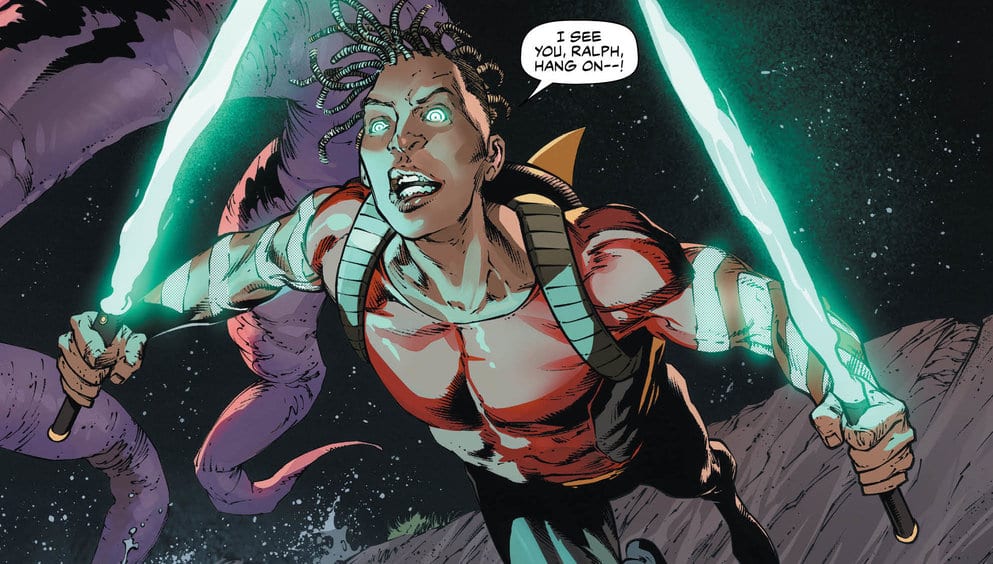 Jackson, with the Old God Callie’s help, charges at the beast with an optimism that’s sure to inspire readers. They can see that the hero trusts his abilities and believes he’ll be able to save Ralph, an innocent bystander in immediate danger. But despite the duo’s combined abilities (and Jackson’s banter about RPG monsters), the creature overwhelms them and kills Ralph on the spot.

Kelly Sue DeConnick beautifully portrays Jackson’s idealism and subsequent disheartening in this moment. We see the cold-hearted face of reality confront the young hero as he watches an innocent person die.

While this preoccupies the heroes, Black Manta, alongside a robot containing his deceased father’s cloned memories, scours the ocean floor in search of something to test out his “father’s” newfound abilities. Will they find Atlantis and harm Mera and the Atlanteans, or will these villains find our weakened heroes in Amnesty Bay?

Robson Rocha’s penciling, Daniel Henriques’ inking, Sunny Gho’s coloring, and Clayton Cowles’ lettering work together in beautiful harmony throughout AQUAMAN #52. The intricate details of the fight with the ocean monster are placed front and center, including the torrential waves and the wounds of both the creature and our heroes. The colors of those defending the Island are juxtaposed with those of the monster, creating a conglomeration of dark and light colors to illustrate the chaos. But the icing on the cake is the shift in lettering throughout each scene: readers will see alternating dialogue boxes that tell of one of the Island’s ancient legends, fostering a momentary suspension of disbelief in the supernatural forces that may be at work.

Rocha, Jason Paz, and Alex Sinclair’s main cover for the book features Arthur in the midst of an attack on the mechanized Black Manta, screaming that he’s “had enough.” This image embodies the pain the protagonist has felt throughout his recent “death,” amnesia, and rebirth processes, showing that every hero has their breaking point.

AQUAMAN #52 is one of the most action-packed books in this current run. It’s also a coming-of-age story for Jackson as he learns an indispensable lesson many heroes struggle with: the good guys don’t always win.

What did you think of Arthur and Jackson’s team-up in this issue? Let us know in the comments below!

Review: AQUAMAN #52 And Aqualad's Loss Of InnocenceAQUAMAN #52 is one of the most action-packed books in this current run. It's also a coming-of-age story for Jackson as he learns an indispensable lesson many heroes struggle with: the good guys don't always win.