AQUAMAN #53, available in stores on Wednesday, October 16th, opens up a new chapter in the life of Arthur Curry. After failing to save a man named Ralph from a horrific sea creature in issue #52, he’s been looking for answers. Fortunately, those answers have arrived right under his doorstep in the form of Tristram Maurer. The Amnesty Bay loremaster seems to have survived after two centuries, and he has a message for Arthur about the sea beast. At the same time, the villain Black Manta has set his sights on Atlantis. Will the former duo of Arthur and Queen Mera be able to alleviate these threats together, or have the past events destroyed any chance of a reunion?

Mera and her Atlantis guard pay a visit a number of destroyed statues in their city gardens, tracing the evidence left behind to Black Manta. Mera interprets this as an act of aggression, an attempt to erase the nation’s history. In response, she seeks out Arthur’s assistance in taking down the villain, despite their current estrangement. 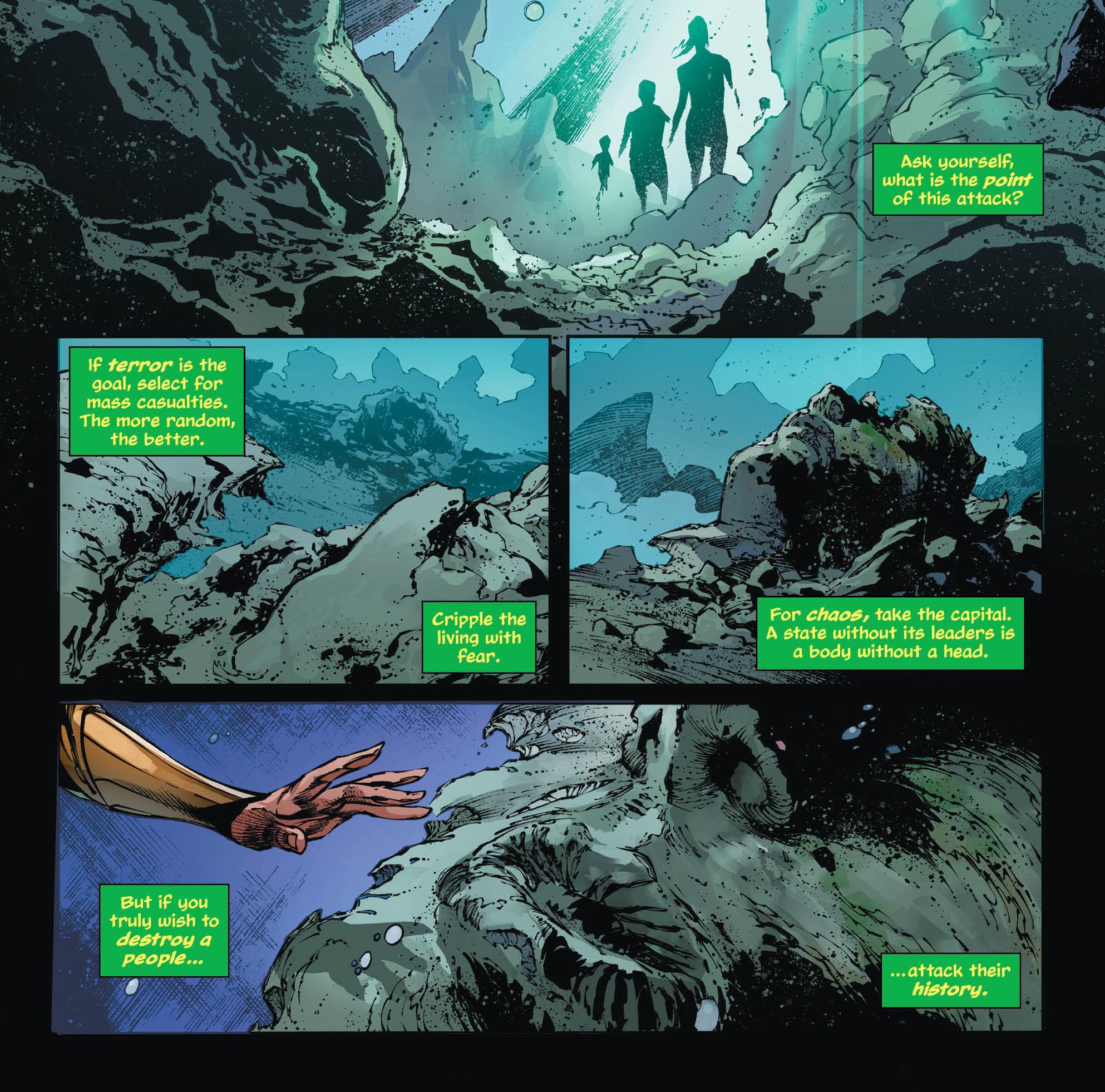 While this is taking place under the sea, Maurer, who told horrific tales of monstrous beasts some 200 years ago, has a message for Arthur: the monsters are real. The old man shares memories of imagining fantastical creatures as a boy, only to find that they became fully corporeal beings soon after. Because of this unfortunate ability Maurer exiled himself from Amnesty Bay and society at large. Now he’s a man full of regret, both for his creations and lost history.

Writer Kelly Sue DeConnick weaves a tale of lost history within this issue—we see material losses in the histories of Atlantis and Maurer. Mera must cope with the lost of historic architecture from Black Manta’s terrorizing attack, and Maurer comes to terms with his self-imposed exile from his home in Amnesty Bay. Can both of these groups come together and stand up against their respective threats?

The artwork was wonderfully diverse throughout AQUAMAN #53. Robson Rocha and Eduardo Pancica’s penciling, fully fleshed out by Daniel Henriques and Júlio Ferreira’s inking, easily transitions from Mera’s underwater kingdom to the small town vibes from Amnesty Bay. Sunny Gho’s coloring adds to this effect as well, especially when Maurer recalls his past; the memories of the old man and his monster creations all have a tan tint to show that these events took place in a distant past—or were ripped out of the pages from a storybook. Clayton Cowles’ lettering is another great feature of the book’s art, offering a variety of narration dialogue boxes to give the reader context; this includes the historical recap of Amnesty Bay’s founding and Maurer’s narration of his childhood memories.

Rocha, Jason Paz, and Alex Sinclair put together the main cover. It features Arthur’s Aquaman uniform sitting on an empty Atlantis throne, symbolizing Mera’s search for her co-ruler to alleviate the city’s threats.

Rafa Sandoval and Rex Lokus’ variant cover gets up close and personal, depicting a close-up view of Arthur’s battle scarred face. Its a perfect reflection of the violence ramping up in Amnesty Bay.

AQUAMAN #53 hits home with relevant themes of regret and loss. It also sets up a number of threats that will put our heroes to the test. We can’t wait for the next issue!

What did you think of Arthur and Mera’s short-lived reunion? Let us know in the comments below!

Review: AQUAMAN #53—The Erasure Of One's HistoryAQUAMAN #53 hits home with relevant themes of regret and loss. It also sets up a number of threats that will put our heroes to the test. We can't wait for the next issue!