Review: AN UNKINDNESS OF RAVENS #1 – The Ancestors of the Witches They Couldn’t Kill, All At the Same High School In

Take The Craft, mix it up with a Riverdale and a John Hughes movie, and you’ve got a good idea of what “An Unkindness of Ravens” #1, from writer Dan Panosian and artist Marianna Ignazzi, looks like. Where Dan Panosian’s script isn’t exactly original, it manages to stay entertaining thanks to this first issue’s promise of mystery, and fun YA high school dialogue. Ignazzi, with help from colorist Fabiana Mascolo, cultivates a fitting aesthetic for this comic, making this an enticing and entertaining opening chapter for fans of both Young Adult fiction and tales of witchcraft.

“Not all the witches burned during the Salem Witch Trials—and the ones that survived did so together, protecting the ancient secrets entrusted to them for generations. They call themselves the Ravens. Wilma is the new girl in school, and she plans to go completely unnoticed—except that she bears an eerie resemblance to the Raven member Waverly, who just went missing. The truth behind Waverly’s disappearance will put the entire coven in danger—and Wilma will have to rely on power she never knew she had if she wants to save her new friends.” 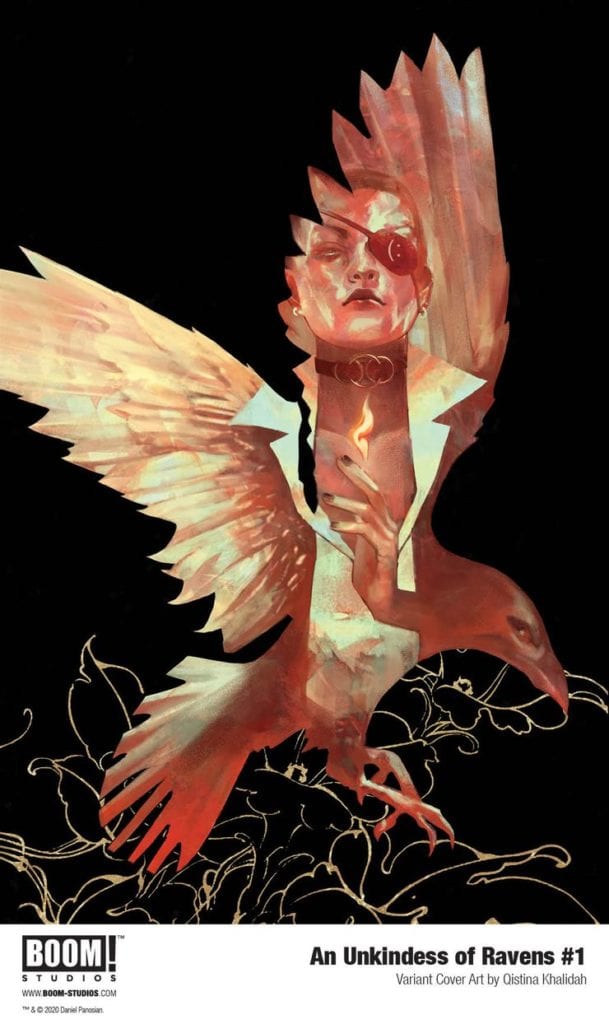 What writer Dan Panosian‘s script for “An Unkindness of Ravens” #1 lacks in originality, it makes up for it in its steady pacing, solid character writing, and intriguing world-building. There’s a constant feeling that something is lurking just outside of what we can see in the story, something that’s cautiously waiting for Wilma’s greater understanding of the world she has stepped into. Panosian’s withholding of information in favor of mystery is felt in how he gives the audience tidbits of relevant background story in the introduction, then dances around the subject for the rest of the issue. There’s a sense of dark grandeur following the plot as we follow Wilma through her High School halls. Hiding realms magic behind standard high school tropes would be annoying if it weren’t for Panosian’s decision to avoid many of these tropes in favor of building mystery around the school’s social groups. This is a clever twist on an old cliche that is (again) not new, but it’s handled with a practiced sensibility that adds to the growing mystique in the rest of the issue. The dialogue and character writing is succinct and naturalistic as well, with narration that offers just enough to keep the audience informed of need-to-know character backstory and personality moments. The lead characters we’re introduced to in this first issue are presented in an engaging enough manner to want to see where this trail leads. All in all, Panosian produces a solid script that takes advantage of its familiar setting and divulges just enough backstory to keep the audience intrigued. 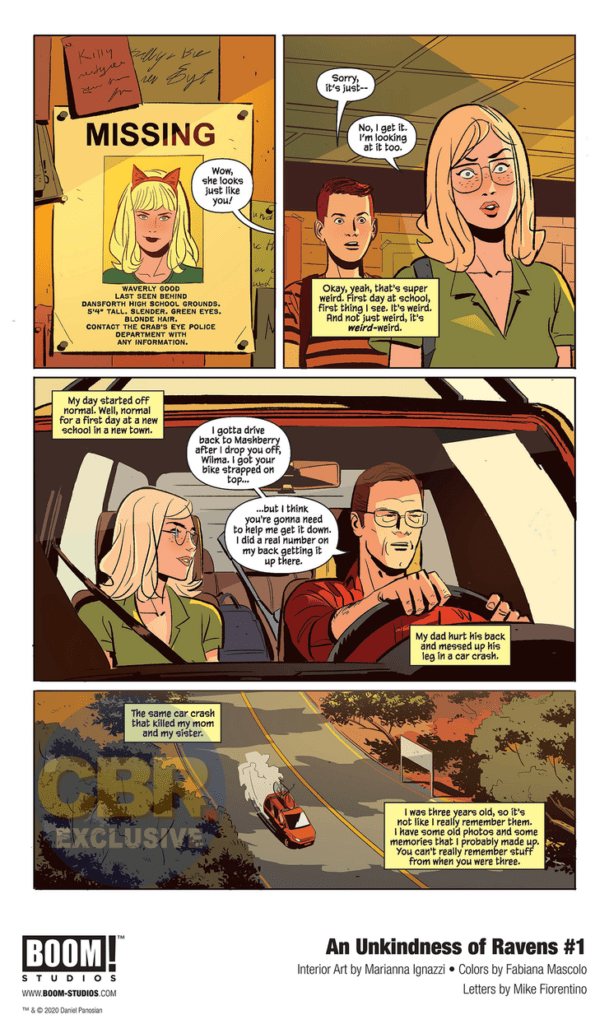 The simplistic but effective visual style of “An Unkindness of Ravens” #1 is due to the talents of artist Marianna Ignazzi and colorist Fabiana Mascolo. The visual focus here is not on overwhelming detail, but instead on crafting scenes that are focused around the characters in them. Ignazzi draws characters that sometimes overlap with facial models that look a bit *too” much like one another, but she makes up for it in not only minor-details and visual cues, but how she constructs a scene panel by panel. The mysterious tension I spoke of earlier is largely due to how Ignazzi frames her focus on characters on in and out of the panel’s focus. The way she introduces new faces leaves a lasting impression that makes up for any kind of accidental similarity they have with one another. The atmosphere created by Mascolo’s color palette is a massive contributor to what makes this comic work. Her use of plain, funny-paper style colors that transform into pallid green hues and then into mystic foggy violets is a subtle but jarring effect that drags the audience into the ever-growing mystique around Wilma and this high school gang of supposed witches. Mike Fiorentino uses a slim font that is easy to read, and keeps his lines dynamic with shifting italics and bolds/size changes to make the actual reading experience seamless, while also adding to the comic’s shifting tones. 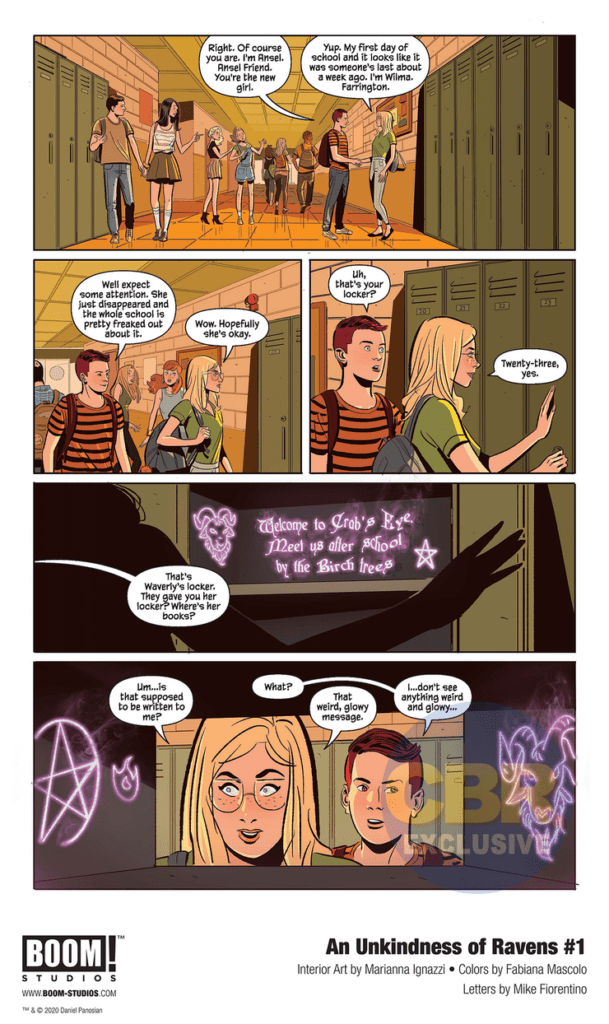 “An Unkindness of Ravens” #1 is an engaging read that follows familiar trends while still offering up enough mystique to stay refreshing. Dan Panosian’s script offers familiar territory delivered in a sharp and suspenseful manner that hides the plot’s lack of uniqueness under solid character writing and growing unease. Marianna Ignazzi and Fabiana Mascolo’s visual work is full of smooth panel direction and a continually changing color palette that work superbly for this comic. If this kind of witchcraft seems up your alley, grab up this debut issue from your local comic shop on 9/23!

An intriguing (if not very original) start to this high school tale of dark magic and drama.Review: AN UNKINDNESS OF RAVENS #1 - The Ancestors of the Witches They Couldn't Kill, All At the Same High School In