Review: An Old Romance Blooms And A New Threat Emerges in AQUAMAN #56

On Wednesday, January 15th, AQUAMAN #56 hits comic book stores with a new creative team and a new direction. Kyle Higgins has taken up the reigns of the written narrative, drawing from Arthur Curry and Mera’s recently rekindled romance to steer this ship toward different challenges. The two Atlanteans now know their love can survive the toughest challenges, and they’re ready to take on the world.

A new day has dawned for our favorite aquatic heroes. Now that the threat of Black Manta is past, Arthur and Mera can plan their future together in peace. We get a look at their engagement party and see that two of the Justice League’s most famous members took the time to celebrate with their friends. 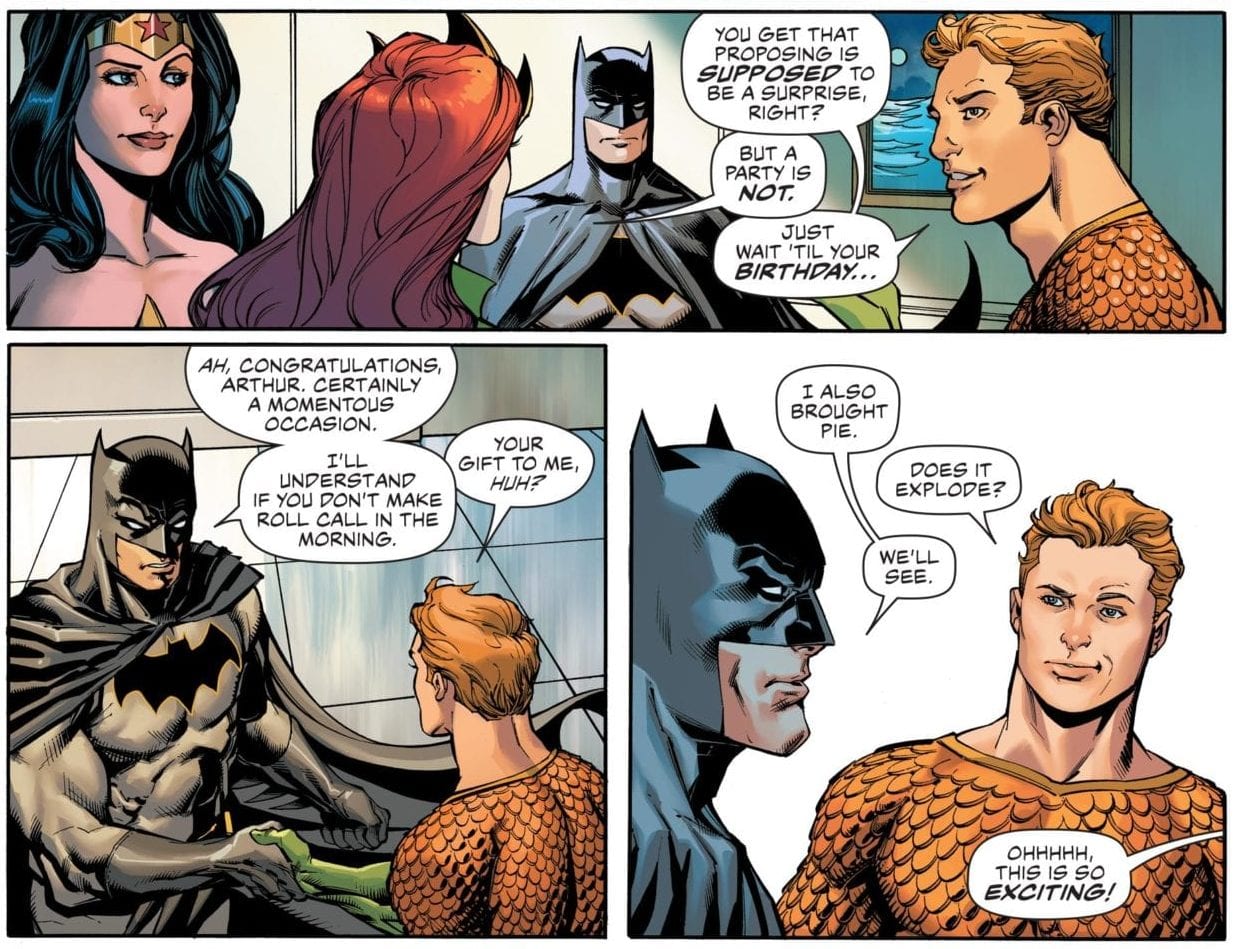 Watching the ultra serious Batman interact in social situations is priceless, and seeing Wonder Woman show Arthur and Mera how much they care about them is heartwarming. But when one of the couple’s friends brings up the subject of children, the two decide they’re in need of some fresh air. 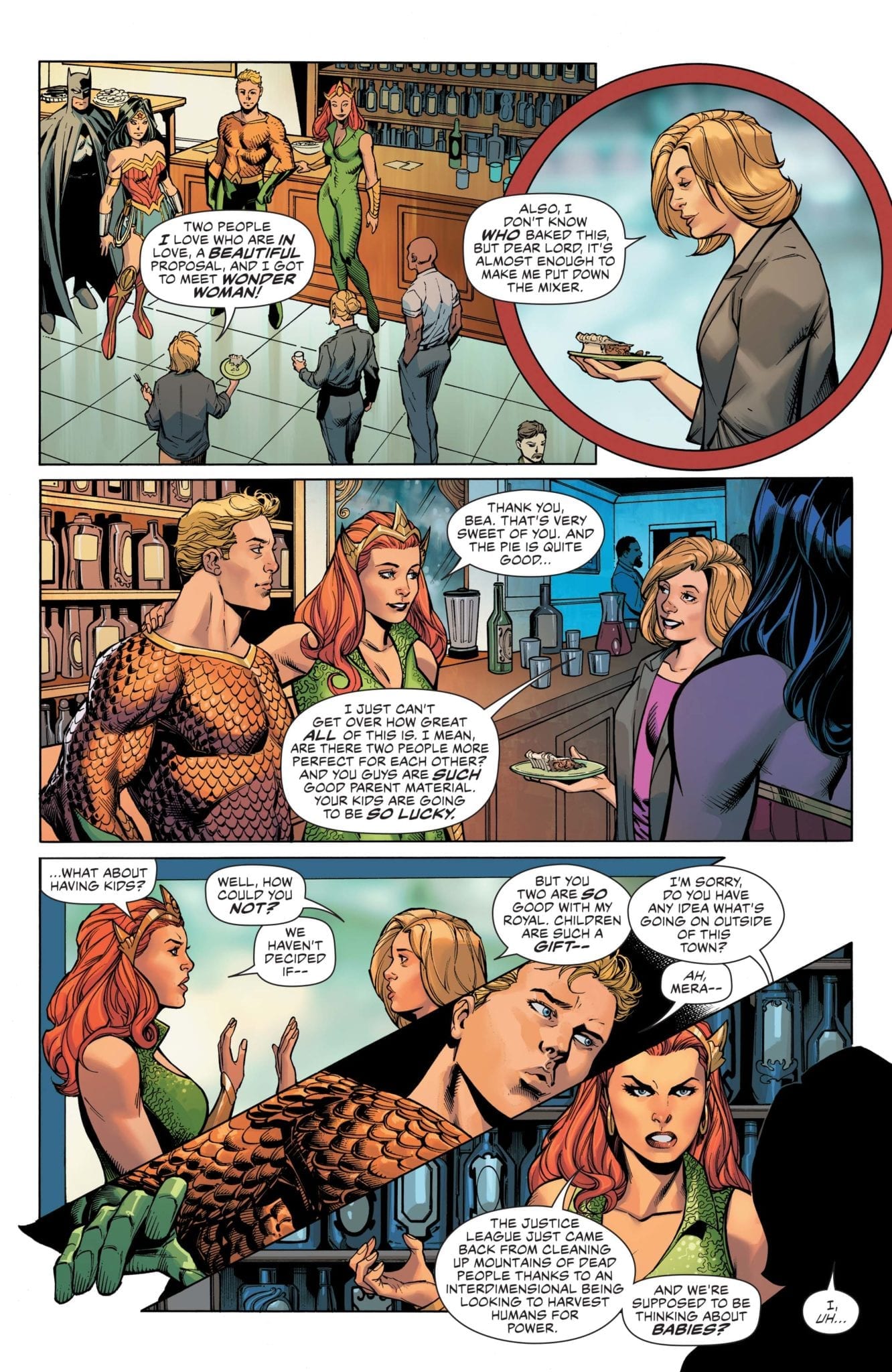 Unfortunately, their break is short-lived when news of an attack on civilians reaches them. They soon discover the Trench has resurfaced (literally and figuratively) and appears to be waging war on the surface world.

Higgins’s writing in this issue gives readers an up close look at the chaos revolving around the lives of superheroes. Even after saving the world from Black Manta and countless threats, Arthur and Mera are still unable to allow room for their personal relationship. In this way, we see that these larger-than-life characters have real human emotions anyone can connect with.

Aaron Lopresti’s penciling, combined with Matt Ryan’s ink work, present highly detailed depictions of our heroes in classic form; it’s as if they were plucked from a comic book from the 80’s and placed into our modern context. But don’t let the nostalgia fool you. There’s a clear modernity to Romulo Fajardo Jr.’s coloring and shading that gives this issue just the right amount of darker tones. This includes Clayton Cowles’s lettering work as well, which employs a strategic use of placement to allow the dialogue balloons to follow the action.

Brad Walker, Andrew Hennessy, and Gabe Eltaeb’s main cover artwork features Arthur and Mera locked in an epic battle with the Trench. They appear to be straining to hold off the threat, making us wonder if they’ll be strong enough to stop the coming challenge.

Skan’s variant cover illustration features the ocean prince surveying the creatures within the ocean depths, reminding us of what continually inspires the hero.

AQUAMAN #56 is a fresh start to the series, moving away from the more mythological foes toward an eminent threat from the past. The break seems a bit sharp from DeConnick’s storytelling, but it’s almost an inevitability when writers change.

Do you like the new direction of this series? Let us know in the comments below!

Review: An Old Romance Blooms And A New Threat Emerges in AQUAMAN #56Higgins's writing in this issue gives readers an up close look at the chaos revolving around the lives of superheroes. We see that these larger-than-life characters have real human emotions anyone can connect with.