Review: An Inheritance of Ghosts in THE DOLLHOUSE FAMILY #5

M.R. Carey and Peter Gross’ “The Dollhouse Family” has been a pleasant surprise of horror/mystery, with the latter of these two making up the bulk of issue #5. The unflinching terror of previous issues is replaced with a curious investigation that clears up much of the history behind the Dollhouse, and still makes for a terrifically eerie read.

“The Dollhouse has taken away another piece of Alice’s soul…but this time she’s not running away. This time she’s going to uncover the secret of the House’s terrible birth…and use that knowledge to destroy it once and for all!” 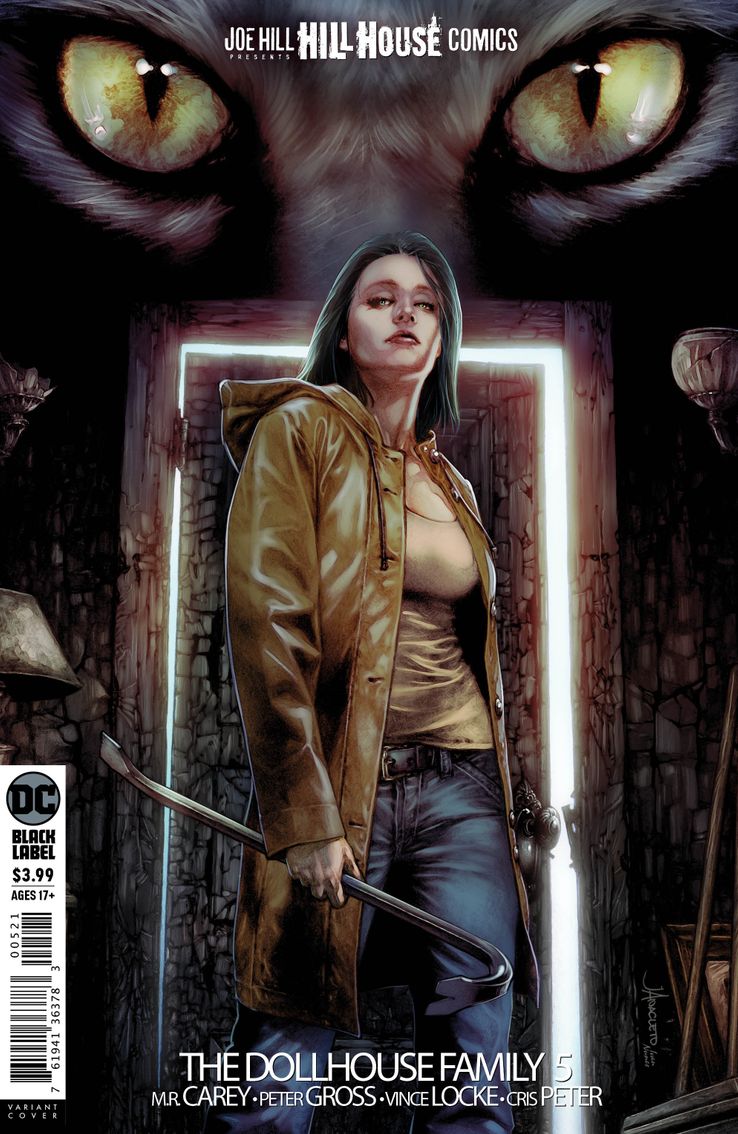 M.R. Carey‘s careful and tight plotting is explored at its most thorough in the pages of “The Dollhouse Family” #5. This issue sets Alice on a journey to rescue her daughter from the clutches of the Dollhouse by finding out about the devilish toy’s past. Even with the investigative nature of this issue, Carey still plays his plot close to the chest. There’s just enough information given to answer a few questions, but still so much kept away to further drag the audience into the story’s murky depths. Horror fans needn’t be put off by this chapter’s more mystery guided tone. There’s still plenty of eerie atmosphere to keep the comic’s tome on track, along with one of the most memorable and gross revelations I’ve ever seen in the medium. The effort put into the pacing and maintaining of the story’s consistently top-notch narrative style promise that this series’ finale will be one to remember. 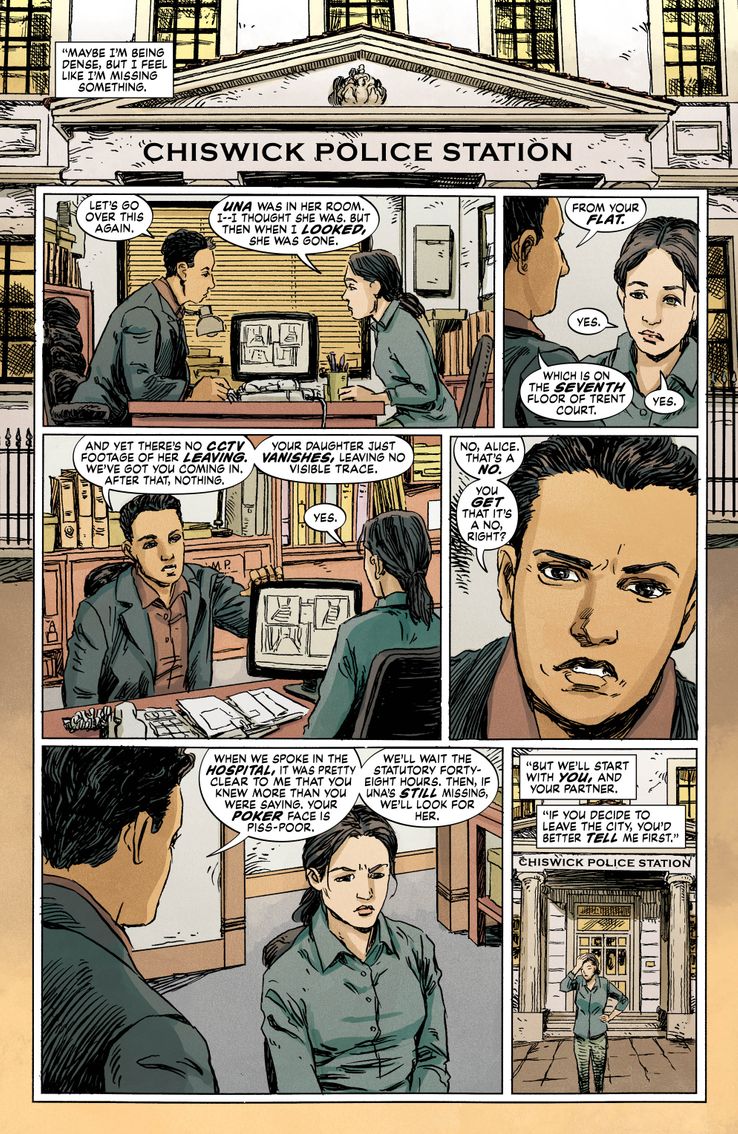 The visual guidance of Peter Gross‘ layouts in conjunction with Vince Locke‘s art continues to make “The Dollhouse Family” one of the most distinctive comics on shelves going into its 5th issue. Gross’ time developing the art for classic Vertigo comics has made him a pro at unconventional panel structures, and while this issue is more by the book than some of its predecessors it still offers great direction in a mystery-oriented chapter. The art itself is once again brought to life by Sandman alumn Vince Locke with colors by Cris Peter. These visuals again work perfectly for the kind of story being told here, presenting a grainy and unrefined style to a mythos covered in dark shadows. The work of the art team does a brilliant job of matching Carey’s quiet methodical pacing and sense of artistic, character-focused storytelling. 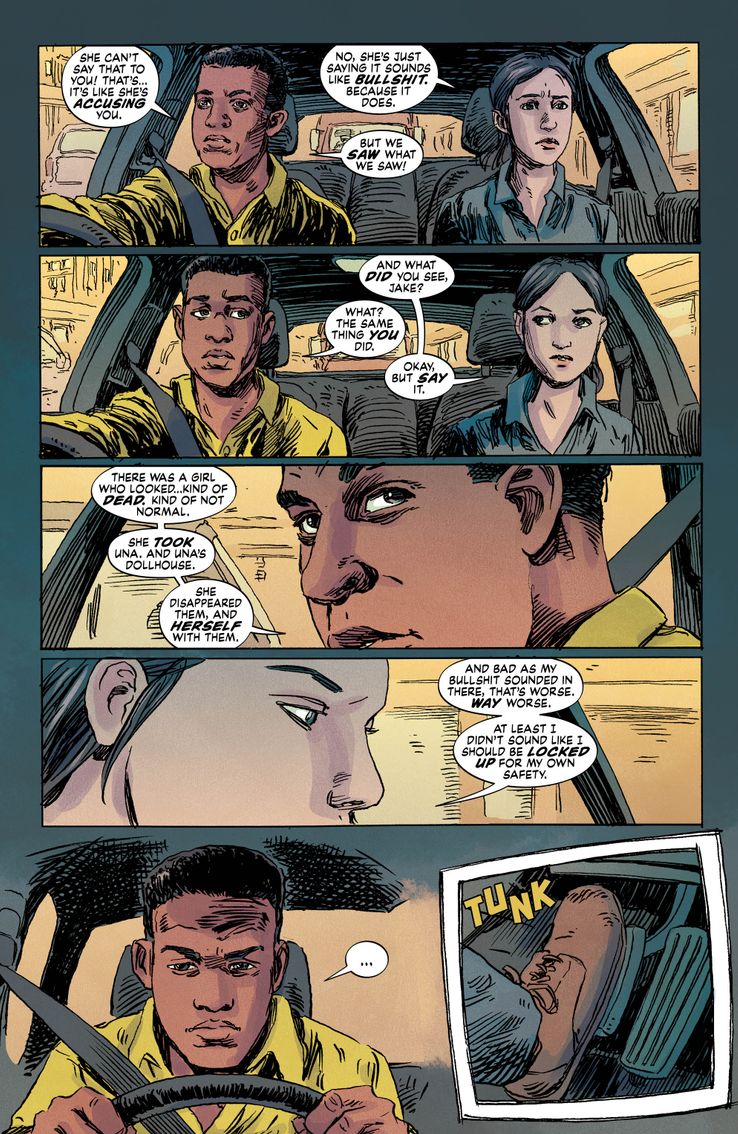 “The Dollhouse Family” #5 is a carefully placed chapter offering investigation into the plot’s many mysteries and turning up with engaging and disturbing revelations. M.R. Carey’s character-centric and winding plot maintains its careful pacing and never gets itself into boggy exposition. The artistic direction of Peter Gross and Vince Locke stays pitch-perfect for the kind of mysterious horror story being told here. Be sure to go out and pick up a copy when it hits shelves on 3/11!

Review: An Inheritance of Ghosts in THE DOLLHOUSE FAMILY #5A quiet issue full of revelations and demonic surprises.