Tombstone is not playing nice anymore

Last month a new run on Amazing Spider-Man began. This series, with a new creative team and a new direction, seems to have a time jump. As readers, we don’t get all the details about what has happened. Zeb Wells worked on the previous run, so there is some continuity in the writing department. John Romita Jr is the artist for this series. He’s joined by Scott Hanna on inks, Marcio Menyz on colors and Joe Caramagna on letters.

What works best for Zeb Wells in this issue are his character interactions. Wells starts us off with a conversation between Peter and Norman Osborn. Norman is still sane at this point and offering Peter a hand. It’s interesting to see the man Norman could have been if he never turned into the Green Goblin. Tombstone has an almost heartwarming conversation with his Daughter Janice. One thing Wells and other writers have tried to hammer home in their last series is that Tombstone loves his daughter. Wells also shows us that Tombstone does not plan on being as affectionate with his enemies. We’re going to see a Tombstone who is ready to get his hands dirty. A special shout-out for using the White Rabbit for this series too. She’s an underused character with good potential. Amazing Spider-Man #2 continues to build on the mystery of what Peter did while solidifying the villains in the story. 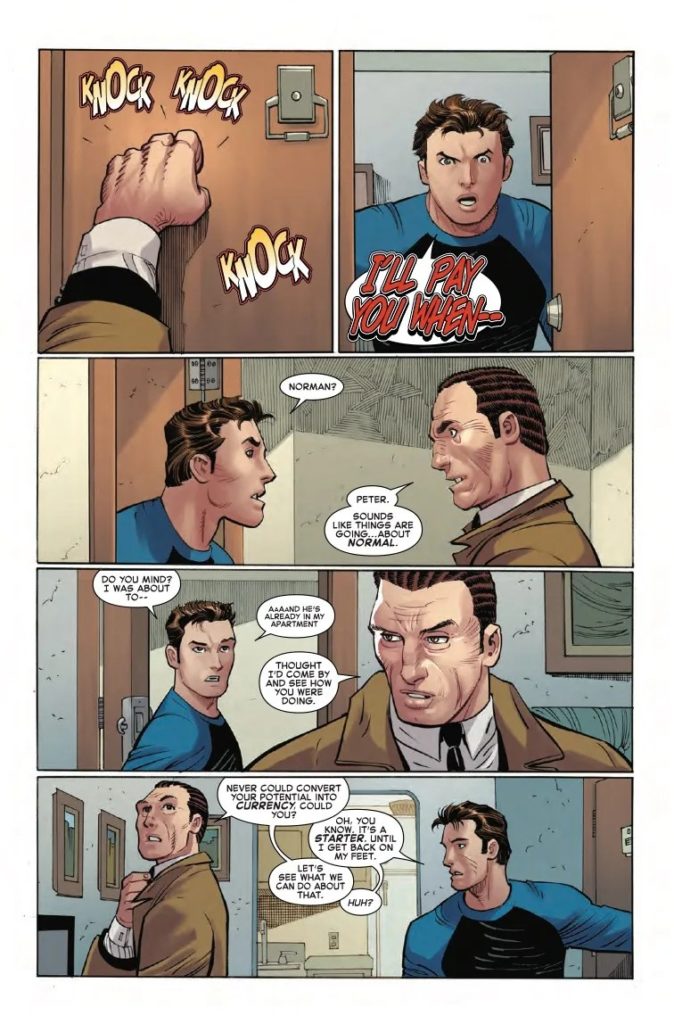 Romita Jr. is the artist who lays down the pencils for this issue. His work at times feels very boxy. In this issue, character faces seem a little misshapen. After that small criticism, Romita Jr. does turn in one of his better performances. Helped out by Scott Hanna on inks, Romita Jr. puts down pencils lines on for Norman Osborn and Hanna smooths them out. Hanna also uses hatching and minor cross hatching on characters to help provide detail. Tombstone is a character that receives a lot of that shading and hatching. This also makes it look like he’s taking a more villainous turn.

The colors by Marcio Menyz work well with Romita Jr.’s pencils. Menyz uses a lighter color palette. Things like Peter wearing a blue shirt don’t leap off the page at you, but they are colorful enough to draw your attention. There is a lot of shading in this issue, especially in panels where Tombstone talks to his daughter. Menyz uses dark backgrounds in these panels. This allows the white from Tombstone to stand out further.

Letters by Joe Caramagna matter here. Something as simple as a Tombstone’s word balloons being puffed out allows us to read his voice as gruff or scruffy. When a character gets excited, which happens a couple of times in this issue, Caramagna does an excellent job of using exaggerated fonts. Sometimes the letters extend outside the word balloon, like when Peter is yelling at Norman. 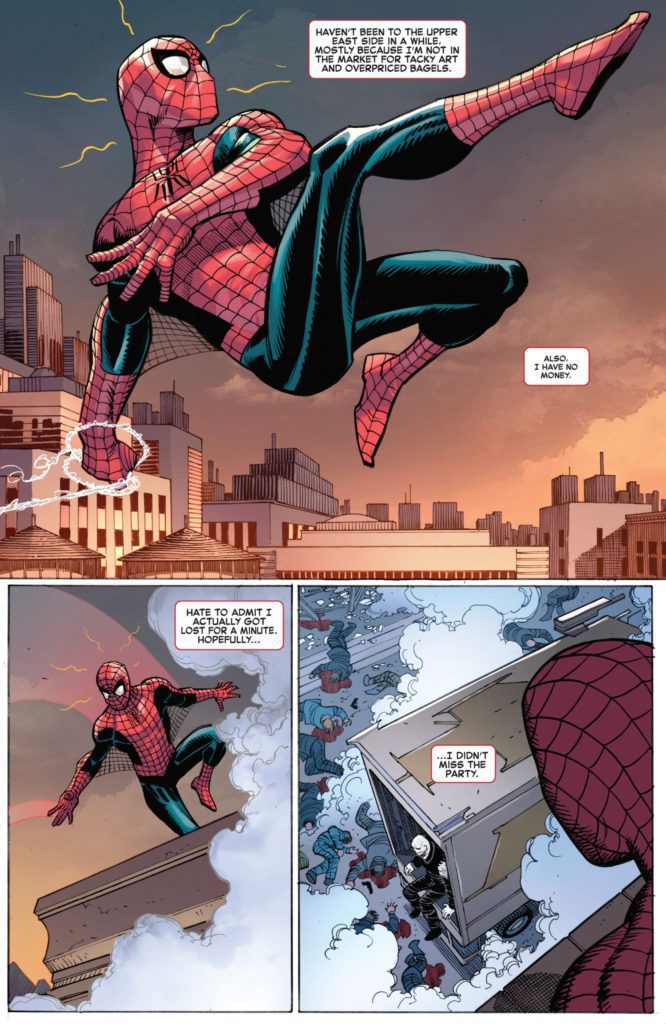 Amazing Spider-Man #2 is a good issue that builds off of the previous one. As a reader, we still don’t know what Peter did to make everyone in his life so mad at him, but that is part of the mystery of this issue. Zeb Wells writes a fun Peter who is down on his luck, but very relatable. The pencils had their hiccups, but ultimately work. Amazing Spider-Man #2 is available at a comic shop near you!