For the 35th Anniversary of the landmark film, writer Benjamin Percy and artist Dave Watcher have created Aliens: Aftermath #1. Along with colorist Chris Sotomayor and letterer Ariana Maher, this one-shot acts as a semi-solid follow-up to the 1986 film. However, with a flimsy script that focuses too much on concepts rather than characters and some solid but inconsistent art, this is an idea that should have stayed in the oven.

“It’s been 35 years since the tragedy of the Hadley’s Hope colony, but what happened to that ill-fated venture has been shrouded in mystery. A renegade crew of investigative journalists are heading towards the moon that Weyland-Yutani has wiped from all records, and they’ll bring back the truth even if it kills them…and what remains in that bombed out site will try to do just that.” 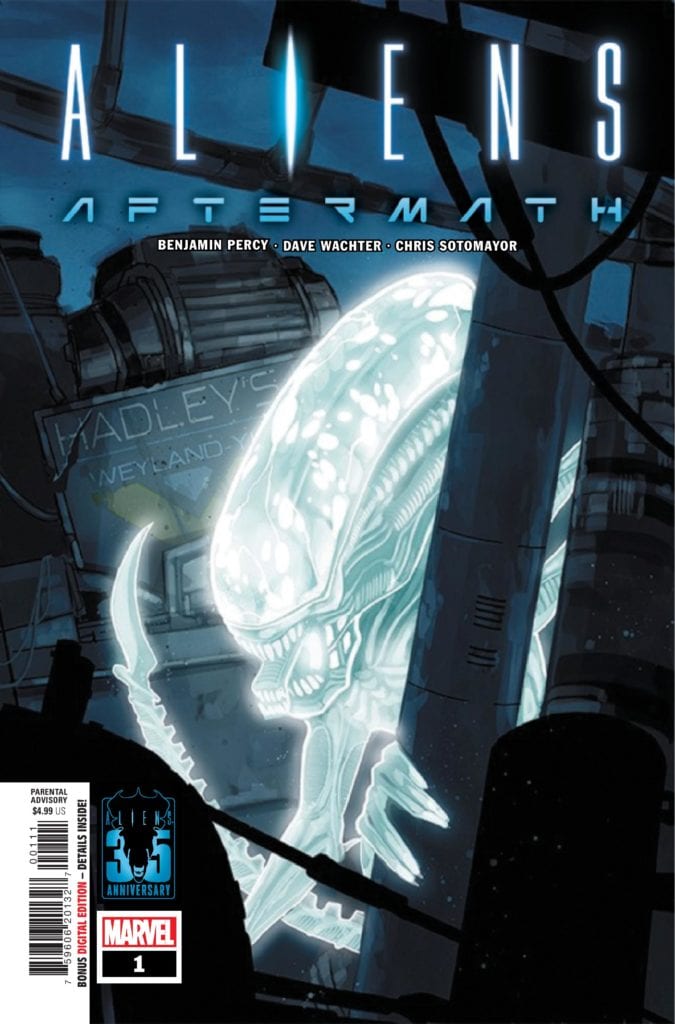 The script for Aliens: Aftermath #1 focuses too much on references and not enough on character or plot. In true Alien fashion, Ben Percy introduces us to a motely crew of misfit space travelers. He actually sets up an intriguing angle from page one. It’s common knowledge that Weyland-Yutani is the true ultimate villain in this franchise. The idea that there are open rebellions and protests against their actions is a welcome topic. At its core, Alien has always been about the callous greed of corporate profit outweighing the lives of human beings. Percy pays heed to this core concept in a manner that hasn’t been seen in this universe.

Unfortunately, this is where the inventive thinking ends. The entire cast of Aftermath is wholly disposable in the same manner as a low-budget slasher flick. In a random Alien one-shot, I would be okay with this. However, this is meant to be a direct sequel to the original Aliens film. A film that is a veritable masterwork of the genre. Among its many other points, Aliens works so well because its characters feel so believably human. What’s worse is that we’re meant to care about these characters because of their connection to the original Aliens cast. 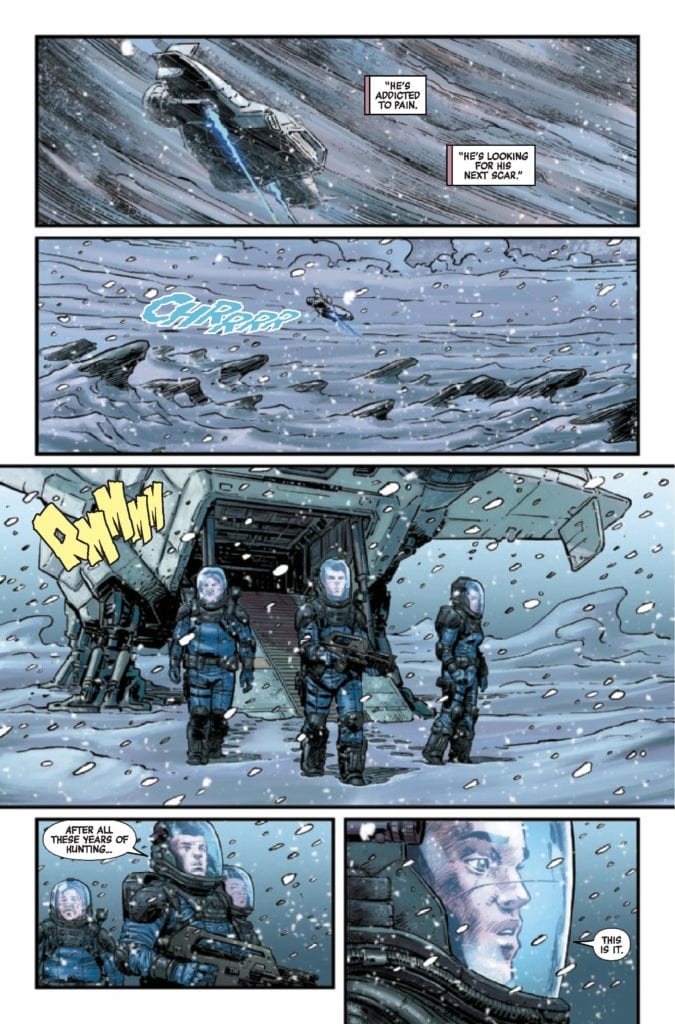 Such A Thing As Too Much Fanservice

Percy’s script just doesn’t give its characters enough time to live up to that legacy. The atmosphere and pacing feel on par with the films, but the rest of the book can’t match up. The new form of xenomorph that shows up is a cool concept, but it’s introduced with no context. Percy throws in nods to Cameron’s film left and right, and while they’re sure to please diehards such as myself, they’re just bait. Outside of its solid political core, Aftermath does little to make itself worthy of the work it pays tribute to.

Keeping the aesthetic and design language of the Aliens universe intact is the top priority for an Aliens  comic. Dave Watcher’s art crafts Aftermath’s aesthetic and does a solid job placing us in this familiar universe. The retro-futuristic technology and used future designs are spot-on. Watcher’s character work is solid, but admittedly a bit inconsistent. Facial animations and expressions can go from tight to looking a bit rushed. This is only a minor issue, but it is noticeable.

The design of the Alien itself is spot-on with Giger’s original, albeit with the new concept for this particular Xeno. Chris Sotomayor’s colors hit the dark and gritty visual spectrum that I’ve come to expect from alien comics in recent years. The rebel crew’s ship is worn by age, and the remains of Hadley’s Hope are marked by nuclear winter. Percy and Watcher’s new Xeno lights up the room (as you can see on the cover) thanks to Sotomayor’s work. Watcher’s panel direction uses some classic off-page tension-building moments to set up scares and twist reveals. These work to great affect, and it makes me wish this comic had more substance to its story. Ariana Maher’s lettering is solid work as well, with a clean modern font and great special effect work. I would have liked more variance in the dialogue fonts, but this is a minor nitpick.

Aftermath is a solid looking comic overall, with thick, shadowy pencils and atmosphere-building colors throughout. 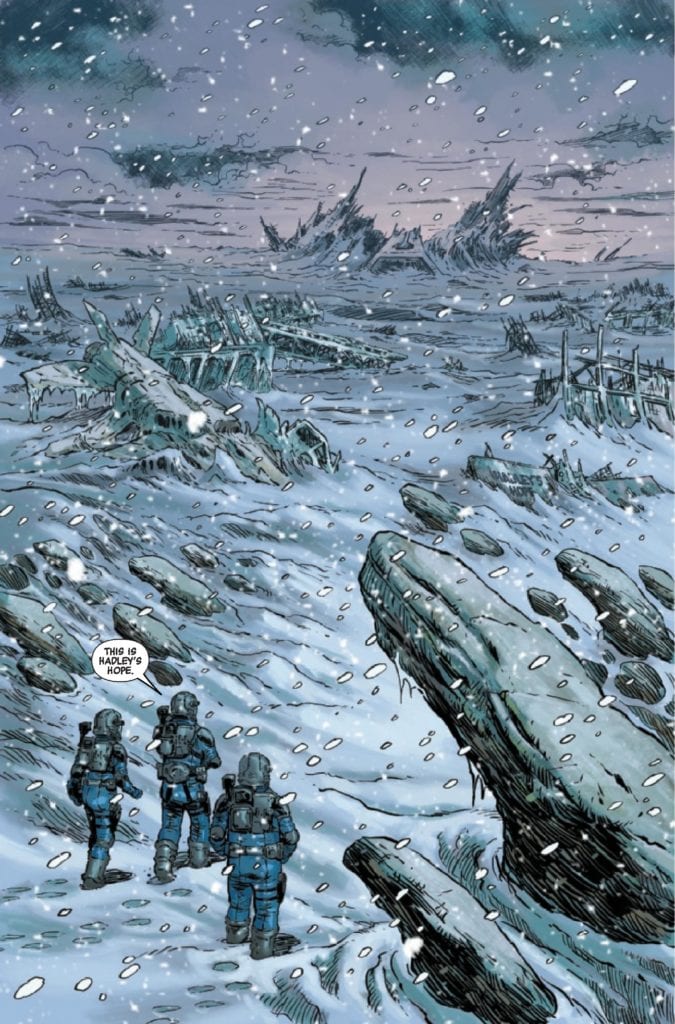 Aliens: Aftermath #1 is a loosely entertaining but unremarkable one-shot celebrating the anniversary of a masterpiece. Percy’s script keeps in line with the Alien political messaging remarkably well. However, thin characterizations and rushed pacing kill the rest of the story’s momentum. The visuals from Dave Watcher and Chris Sotomayor are nothing unexpected, but still very solid and present the Aliens atmosphere well. If you’re a massive fan of this franchise and Cameron’s acclaimed film, then you may want to pick this up when it hits shelves on 7-14.

While still semi-entertaining, this Aliens sequel comic throws new ideas at the Alien wall of mythos and very little sticks; least of all its cast of disposable characters.Review: ALIENS: AFTERMATH #1 - An Unnecessary Sequel