REVIEW: ALIEN #10 is a Terrifying Book That Continues to Scare

There is nowhere to run from the Xenomorphs

Of all the comic book genres to write, horror may be the most difficult. To show images or words on a printed page that are enough to creep readers out is not an easy task. For writer Phillip Kennedy Johnson and artist Salvador Larroca, it seems to come naturally. Alien #10 is out from Marvel Comics, and it’s another terrifying chapter in the series. Joining Johnson and Larroca is GURU-eFX on colors and Clayton Cowles on letters.

With books and movies like the Alien franchise, sometimes the characters can be a little thin on development. Johnson, however, has done a good job of introducing us to the new survivors in this series. Jane is clearly the most important of the new characters. Johnson shows us she is a character that is willing to do what it takes to survive. Jane has kept the head of Ambrose, their traitorous android, to help her navigate the new world they’ve just landed on. This is a problem for members of the current crew since Ambrose was responsible for some deaths last issue. Johnson knows that while the survivors are important, on a book like this, it’s all about the monsters. About halfway through the book things start to take a creepy turn. Johnson starts giving us clusters of Xenomorphs hidden in pages. There are busted alien eggs all over the place and civilians in alien goo. All of these images are unsettling and straight from the movies. Johnson delivers a good script that will win fans of the franchise over. 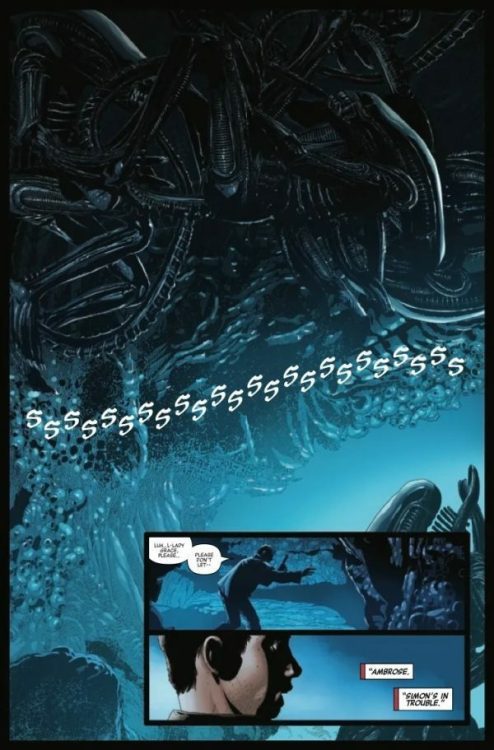 The pencils by Larroca are crucial to an issue like this. Larroca had to create a new settlement station with his work. Larroca does an amazing job of giving us establishing pages that show what this new settlement looks like. There are jungles and run down buildings where our survivors explore. Larroca draws everything flawlessly in this beat up space station. Piles of junk, beat up houses and splattered blood are scattered everywhere. This sets the tone for the type of atmosphere our survivors are walking into. The Xenomorphs look menacing as they attack our survivors. Some of the kills Larroca draws are ruthless and downright creepy. His pencils are a master class in comic book art.

The colors by GURU-eFX compliment Larroca’s pencils perfectly. GURU-eFX captures how dark and dreary this space station really is. Smokey grays and dark blues are used throughout the issue that add depth and effect to the mood. The background colors of the jungle earlier in the issue grab your attention. For such a depressing issue, the greens of the leaves provide a vibrant escape from the darkness ahead. GURU-eFX completely crushes his colors this week. His work is gorgeous and a great addition to the Alien mythos.

Clayton Cowles has the most fun job in this book. He gets to letter Xenomorphs hissing. Needless to say, that’s an iconic sci-fi movie sound. As one survivor goes off to look for a friend, we see the “ssssssss” scrolling across the page. This is probably one of the most terrifying sounds any character can hear in this series. The sound effects of guns being shot or a survivor being ripped down from goo are all spot on as well.

Alien #10 is a chilling entry into the new Marvel series. No character is safe and all of them are in a state of constant danger. Phillip Kennedy Johnson has solidified himself as not only a great storyteller, but a brilliant horror writer. Phenomenal pencils and colors make this book a must read. Alien #10 is out at a comic shop near you!

At the end of the day, we're all just food for Xenomorphs.REVIEW: ALIEN #10 is a Terrifying Book That Continues to Scare