From Titan Comics and original Mangaka Takashi Okazaki comes the newest edition of a cult-hit samurai action series with Afro Samurai Vol. 1. As part of Titan’s new manga publishing initiative, this hip-hop and sci-fi influenced sword manga is getting a new lease on life with a “Director’s Cut” celebrating the 15th anniversary of the anime adaptation. With a simple yet entertaining story and hyper-stylish visuals, Afro Samurai is a blood-spattered blast of a read.

“In a feudal, futuristic Japan, samurai battle to become No.1 and rule the world, but when his father, who holds the coveted position, is challenged and killed, the young Afro Samurai vows vengeance. Relentlessly pursued by murderous assassins, will he stay alive long enough to keep his promise?” 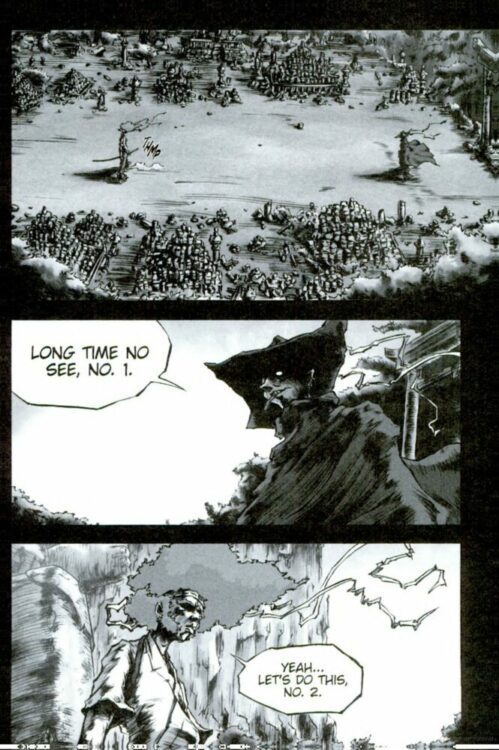 Okazaki’s opening chapters here in Afro Samurai Vol. 1 are exactly what a reader would expect from a sword/battle manga. The protagonist, nicknamed just “Afro” for short, becomes the No. 2 swordsman in the world after watching his father, the former No. 1, get killed by a mysterious assassin. The rest of the story up to this point is Afro being pursued, challenged, and ultimately dominating all those foes who come after him. It’s a simple and familiar story that is nonetheless a blast to read. Afro is your staple stoic protagonist, speaking few words and preferring to let his bladework do the talking. The only fight he’s interested in is the one against No. 1 to avenge his father – all the others are just practice. Okazaki takes noticeable influence from other great samurai works like Vagabond and Yojimbo, while also sprinkling in cyberpunk and sci-fi elements. Modern weaponry and cybernetic implants co-exist in this twist on feudal Japan, creating something that feels akin to Frank Miller’s Ronin or Samurai Jack. Despite these extra genre features, this is a lone samurai story through and through, with just enough character to keep readers attached to Afro’s coolness to keep the pages turning through all the bloodshed. 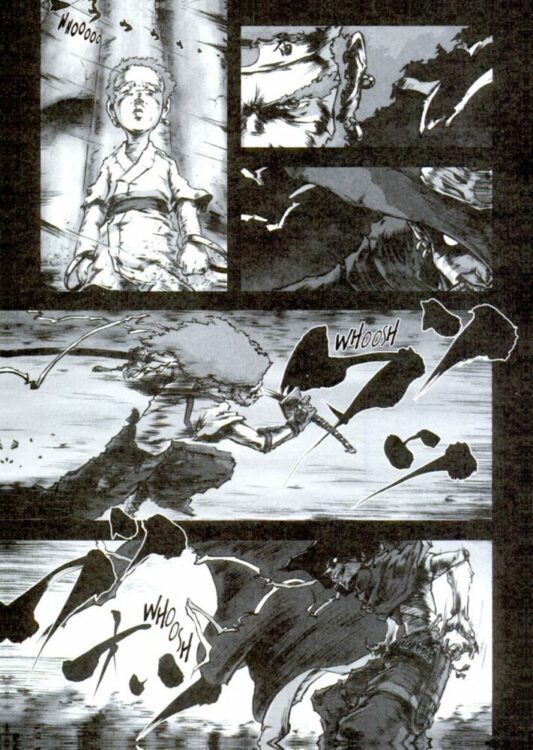 Afro Samurai’s simplicity with its storytelling is ultimately made memorable because of Takashi Okazaki’s artwork. His penciling covers the page with fantastic character design, stellar animations, and a unique use of shading and color that makes this manga stick out among its contemporaries. The actions flows smoothly and with massive energy, as Okazaki focuses on emphasizing speed in his fight scenes. Duels happen and are over in a sequence of simple yet carefully constructed panels that carry mountains of momentum for every sword stroke and gunshot. As with most Manga, there’s almost no coloring aside from Okazaki’s smoky sprays of red blood. He evokes a visual style similar to Hiroaki Samura’s work in Blade of the Immortal, along with hints of Western artists like Moebius. Okazaki wears his influences on his sleeve, but utilizes them in a fashion that creates an experience that is unique unto itself. 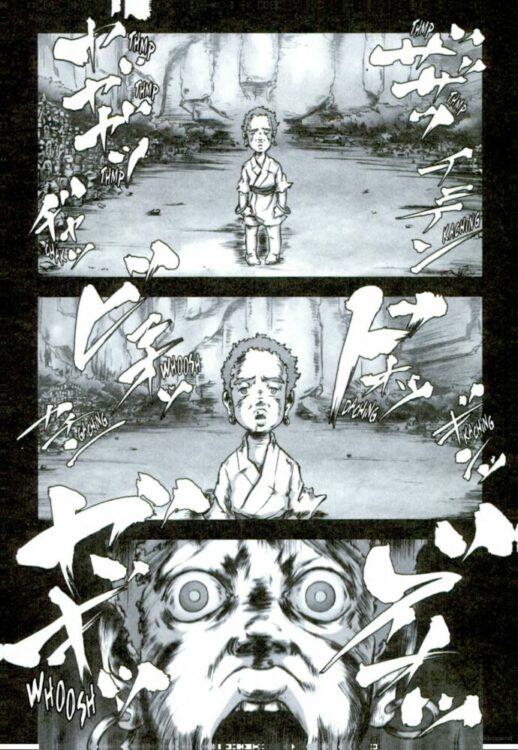 Afro Samurai Vol. 1 is an entertaining and ass-kicking set of opening chapters for this cult-hit manga. Takashi Okazaki makes his influences plain as day, but crafts a story with those influences that is both familiar but refreshingly unique. If you’ve read manga, Afro Samurai’s narrative won’t strike you as anything new – but its visual style and genuine flair will keep you hooked. Be sure to grab this new edition when it hits shelves on December 13th!