Review: Some Tales Ended, A Treasure Rediscovered in THE DREAMING #18

The second-to-last arc of Si Spurrier and an incredibly talented team of artists’ run on The Dreaming comes to an end with issue #18. This wondrous arc ends in an emotional and poetic chapter that wraps up not only one of the most pressing plots in The Dreaming itself, but builds on a Sandman story some thirty-years in the making.

Rose Walker was a vortex, once. And as a vortex, she draws dreams to herself…and she is drawn to them. And it’s a good thing, too, because Dora, Matthew, and Abel are in well over their heads in the waking world—a world that is slowly destroying itself, as Wan’s plans for the collective unconscious of humanity have come to pass! 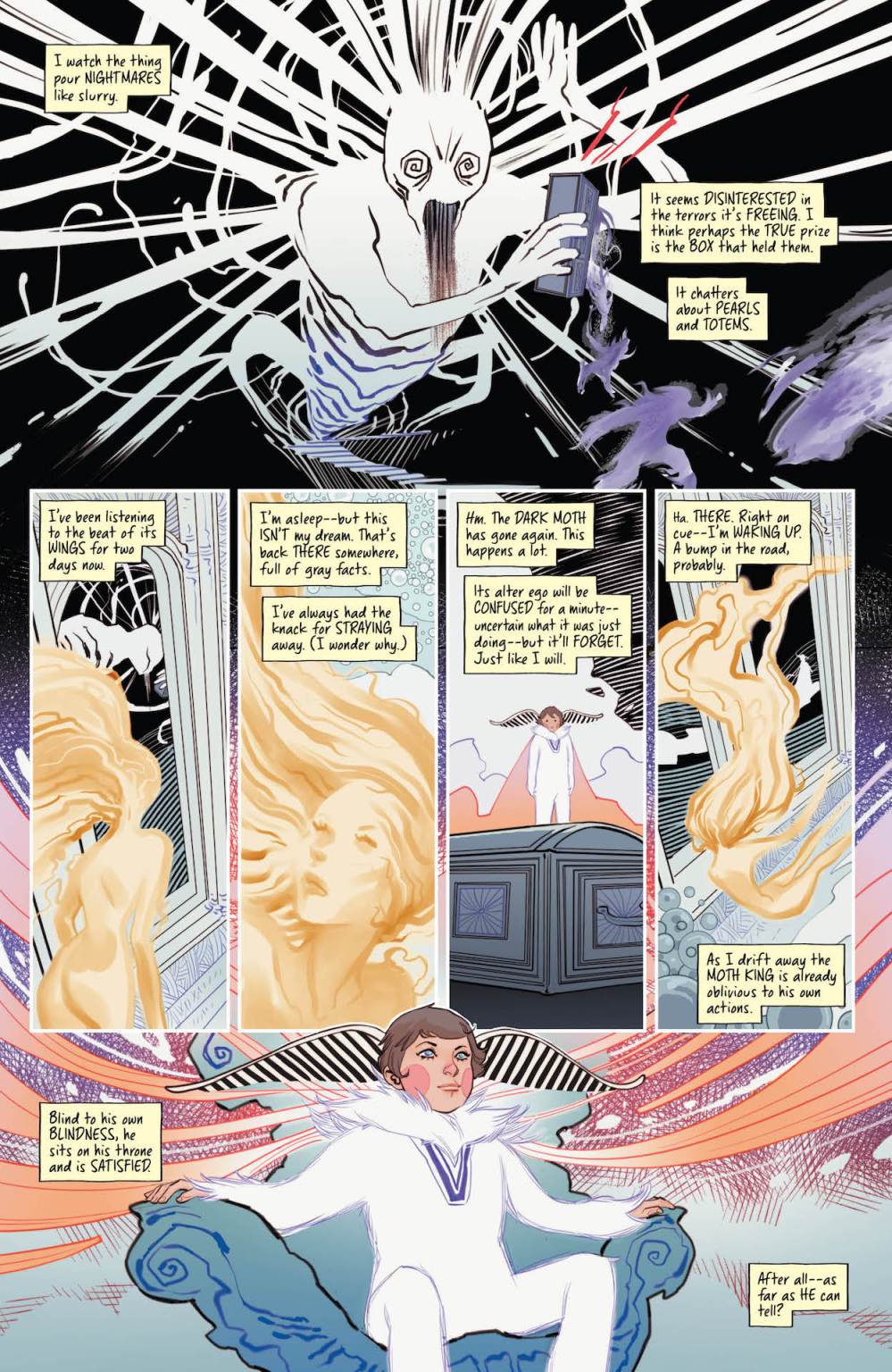 Writer Si Spurrier has had the unenviable job of continuing the story of the world Neil Gaiman created in Sandman over thirty years ago. Fortunately, Spurrier has been up for the task. His work on The Dreaming has successfully recaptured the wonder of Gaiman’s universe and character while barely featuring the Dream Lord himself. The real wonder of The Sandman Universe is the variety of characters that inhabit it, and Spurrier writes them all new and old with all the intelligence and charm as could be desired. The return of Rose Walker from the classic “Doll’s House” storyline from Sandman is an absolute treat for classic fans and a wondrous end to a plot point here in The Dreaming. The story in this issue is presented through a considerable amount of internal narration from Rose herself. In true Sandman and Spurrier fashion however, it’s an entrancing joy to read. The prose is poetic and enrapturing even at its most dense. The only possible slight against this issue is that if for any reason a person who hasn’t read Sandman picks this up (fat chance), they’re going to be a bit lost at some of these revelations. Outside of that, this remains a fantastically written piece of comic storytelling. 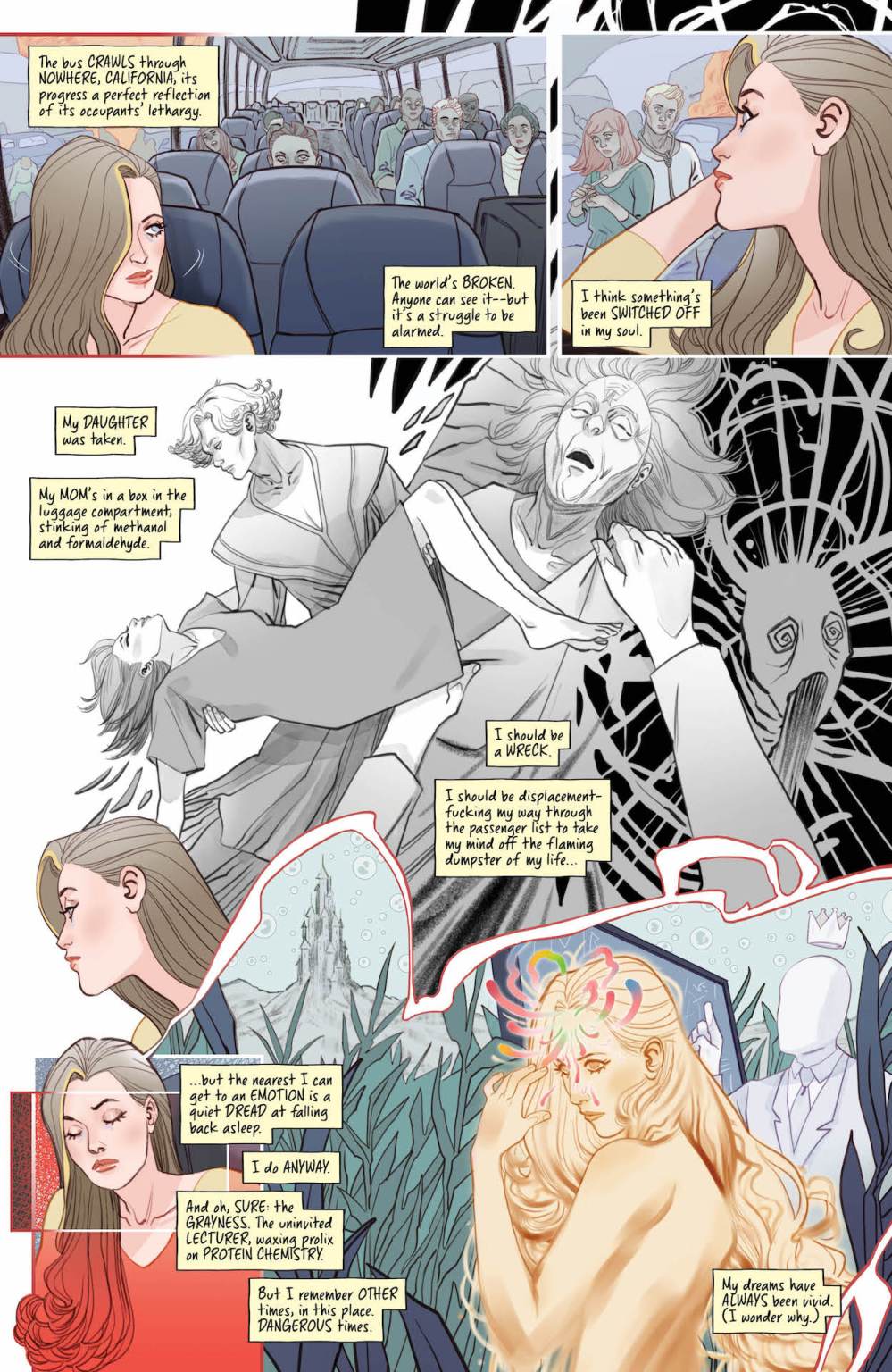 While it is disappointing not having the phenomenal Bilquis Evely on art again for this chapter of her and Spurrier’s run, Marguerite Sauvage does a stellar job in her stead. Her pencils faithfully capture the myriad characters and unique visions of the Dreaming’s cast while also bringing a grounded reality through. This reality is besieged by Wan’s accidental destruction of fiction, and so the dead expressions on the many human characters create a perfectly somber mood when needed. The colors may be the real champion here, as the palette shifts from the muted grey of a dying society to explosions of unexpected color. Panels and shots run a gamut of color choices that intensify the wonder of this altering universe. Sauvage’s visual flair fits in extraordinarily well on The Dreaming #18. 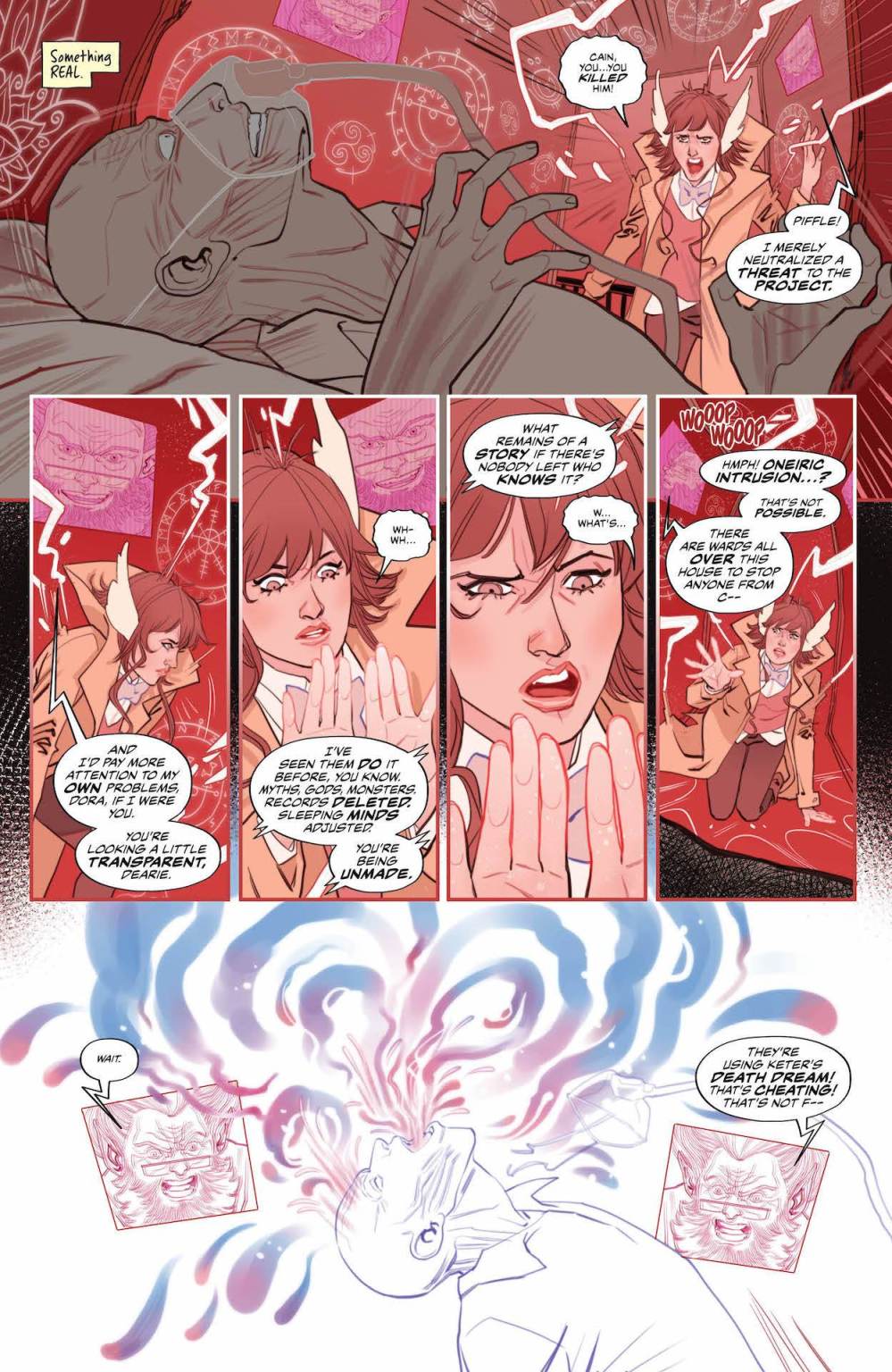 Thus, the time of Si Spurrier and a host of wildly talented co-creators tenure on The Dreaming nears its end with issue #18. This is a beautiful and poetic chapter of chaos and emotion that ends some stories, but leaves others open the final two issues of Spurrier and Co.’s run. The script is eloquent and nostalgic, while the art is stunning to examine. This has been one of the best runs to watch happen over the past couple years, and so it will be an intriguing wonder to watch the future of this story come to a close. Be sure to grab this chapter on 2/5!

Review: Some Tales Ended, A Treasure Rediscovered in THE DREAMING #18An emotionally satisfying and mystical end to Si Spurrier & Co.'s run on The Dreaming.