Flavor Girls #1 is a book that’s been in the works for a while. Starting from creator Loïc Locatelli-Kournwsky’s designs for magical-girl characters years ago, their world slowly evolved and took form, with him posting all sorts of illustrations, bios, and mini-comics on his website. The years-long gestation added a lot of different influences to the mix, from post-apocalyptic alien invasion narratives to Eurocomics to more traditional magical girl manga. But writer Loïc Locatelli-Kournwsky and colorist Eros de Santiago have finally pulled all those threads together, so let’s see if their efforts bear fruit.

Twelve years before the comic takes place, an alien ship appeared hovering above the Pacific Ocean. Climate disasters followed, and a team of earth’s chosen diplomats was met only with violence. All that saved humanity from extinction was the appearance of the mysterious “Flavor Girls,” a team of warriors in colorful costumes blessed with powers from something called the “mother tree.” And in the present, after falling into a giant pineapple, young activist Sara finds herself the latest recruit. It’s a far cry from the U.N. job she’d been applying for. But making a difference might mean waving a pineapple wand and taking the alien “Argarthians” head-on.

One of Loïc Locatelli-Kournwsky’s most significant accomplishments in this issue is how he incorporates so many different ideas and influences without descending into tonal whiplash. This is a comic where the fruit-themed magical girls have to allow national representatives into their magically time-displaced fortress to avoid disrupting the delicate political balance of a post-apocalyptic world. Yet none of those elements ever entirely overpower one another. Locatelli-Kournwsky’s breezy pacing certainly helps. While the opening scenes of carnage could easily set a grim tone, a quick shift to light banter between friends keeps things fun. The point-of-view character, Sara, also contributes to the tone by following in the Sailor Moon tradition of reluctant heroism punctuated by pratfalls and freakouts. She’s a good kid but has a ways to go before she fully matures into her new role. 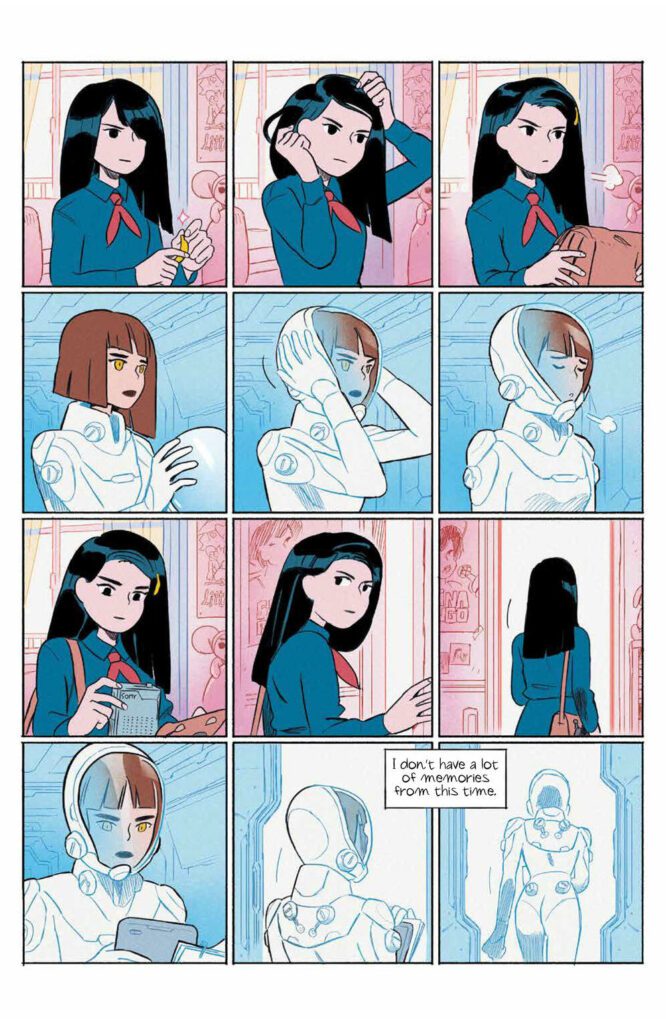 Also counteracting the chaos in the premise is Locatelli-Kournwsky’s clear, methodical, beat-by-beat visual storytelling. Pages are mostly set into precise grids, each action getting dedicated panels for both wind-up and follow-through instead of cutting to the most dramatic poses within each scene. For example, when a monster lands to block the protagonist’s path, a panel is set aside to show it jumping first. This also gives the characters time to emote through small displays of body language, which is especially important in a book dedicated to setting up a team dynamic. The other creator working with Locatelli-Kournwsky is colorist Eros de Santiago, whose soft pastels gel perfectly with the gentle, rounded art style. The biggest emphasis is on primary blues, yellows, and pinks, which become harsher or more subdued based on the scene’s mood. But these are nature-based heroes, so their forest hideout adds a healthy helping of green to the mix. It all comes together into a colorful, welcoming atmosphere.

Locatelli-Kournwsky’s lettering eschews the bold all-caps standard of the American industry for a font with a sloping, handwritten look more typical of Eurocomics. Rather than bolded, emphasized words are underlined, exclamations written in a scratchier, messier style. It’s all a piece with the comic’s somewhat gentler approach, and the artist’s involvement helps it blend in effortlessly with the art.

Flavor Girls #1 is a genre-blending passion project that could easily fall apart if it didn’t have an experienced creator at the helm. The book trades in casual confidence that makes all its disparate choices feel simple and natural. It’s out today from Boom! Studios, so make sure to pick it up.

Pineapple wands and post-apocalypses never gelled quite so well.Review: A Gentler Post-Apocalypse in FLAVOR GIRLS #1