After a five-year break, Geof Darrow’s signature creation has wandered his way into a new series. This time, the focus has turned towards a story about parenting. Where the child happens to be a Komodo Dragon. And the parent has to save said child by waterskiing through the desert tethered to a pterodactyl. Writer/Artist Geof Darrow, Colorist Dave Stewart, and Letterer Nate Piekos all work in tandem to continue the Cowboy’s never-ending journey through the surreal. It’s almost like he never left.

The issue opens with the Shaolin Cowboy still standing in the same intersection the last miniseries ended in, clutching the wounds from his climactic battle with King Crab. But instead of being set from the Cowboy’s perspective, Darrow frames the issue around a pair of talking father and son Komodo Dragons. While the pair sit atop the roof of an old apartment, the Father immediately recognizes the Cowboy from a distance. It turns out the aged lizard had met who he calls “the Desert Wanderer” many years ago. In a flashback, we learn that shortly after hatching from an egg in the desert, the Father had been threatened with being eaten by his own father. Wandering by at an opportune time, the Cowboy stumbled on the attempted infanticide and chose to save the fresh hatchling. The Komodo Dragon immediately decided to take the Wanderer as a new father figure. But soon, the new partners are threatened by a diminutive man riding a giant jellyfish.

Looking at all the previous Shaolin Cowboy installments, Cruel to Be Kin is tonally closest to the very first miniseries, Start Trek. While all three past series had quite a bit of spectacle, the first went furthest in throwing different scenarios at the Cowboy, jumping from an all-out desert brawl, to a city perched atop the back of a giant creature, to an underground shark pit. This issue ending with a baby man on a chi-channeling jellyfish feels like a statement of intent. That after two installments focusing on threats which were relatively grounded by Shaolin Cowboy standards, the absurdity is being ratcheted back up. Darrow mused on his Facebook that this series was created during the height of the pandemic, developing into an effort to create something worth leaving behind in case the virus prematurely killed him. So the brakes are off. This is Shaolin Cowboy at its most feverishly creative.

Which isn’t to say that the issue lacks a thematic through line. Darrow’s main obsession throughout Shaolin Cowboy has been with consumption. The Cowboy himself was kicked out of his Shaolin temple for being unable to forsake earthly pleasures. The main antagonist of past issues was the product of the Cowboy losing control at an all-you-can-eat buffet. The world is choked with graffiti and garbage. So the real-world fact that Komodo Dragons often eat their young is a perfect launching point for the series.  Whether the comic will remain in flashback is yet to be seen, though the title ‘Cruel to Be Kin” makes it clear that the relationship between the Cowboy and the Dragon won’t be a purely positive one. At least they haven’t tried to eat one another. 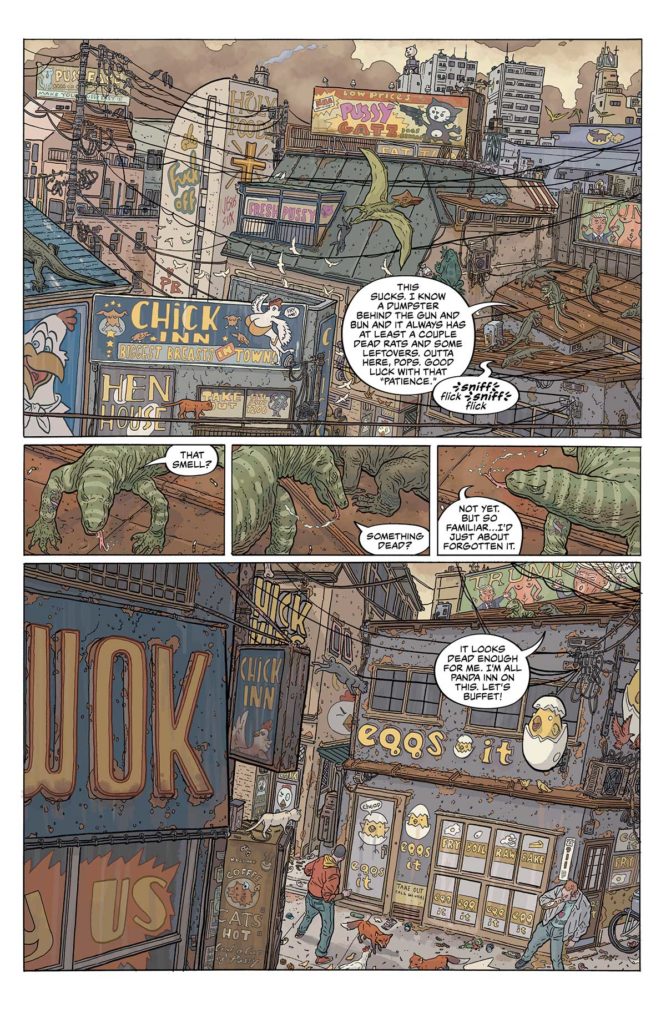 Darrow’s a born maximalist, cramming everything he can into each and every page. It works hand-in-hand in a series obsessed with excess. And after a series set squarely in a crowded town, Darrow gets to return to drawing two of his favorite subjects: Majestic desert landscapes and garbage. Whenever the action kicks into gear, the swirling desert dust goes flying, along with countless cigarette butts and beer bottles. An ancient dinosaur skeleton is covered in graffiti, ranging from a McDonalds logo to the phrase “Dick 101.” But the wildlife aren’t exactly clean either. Darrow’s people and animals constantly sweat, bleed, and spit. A few frogs even smoke. Touch any surface in this comic and your hands will come back sticky or stained. 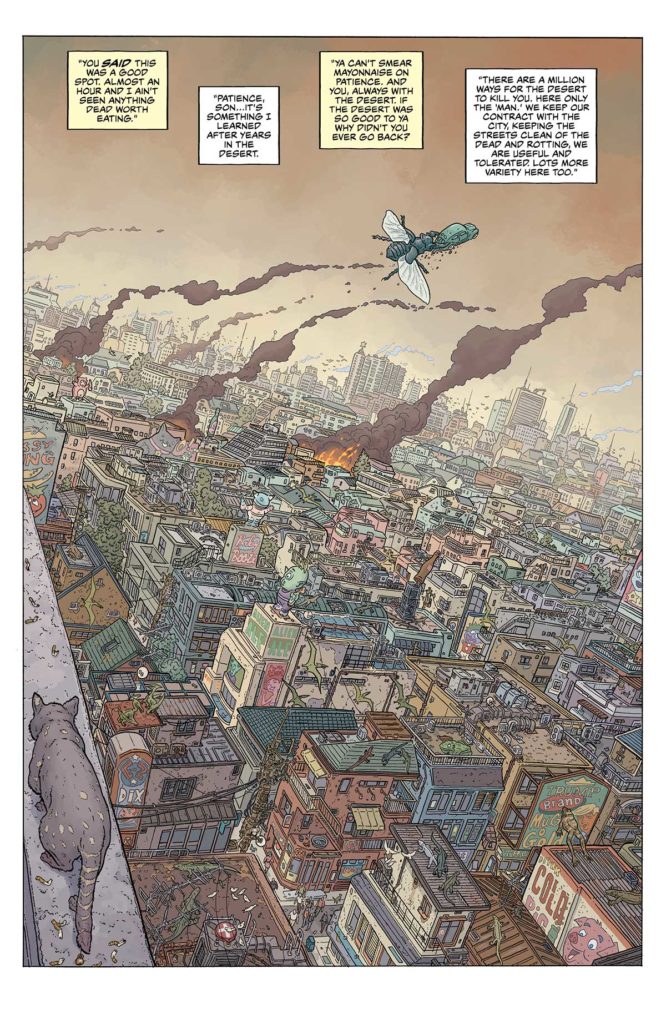 Dave Stewart’s coloring works to emphasize the hot and heavy, sun-bleached desert most of the comic takes place in. The sky is sickly yellow and the landscape varying shades of orange, pink, and brown. The only real cool blues come from the Cowboy’s ineffective sun-blocking umbrella, and the intentionally out-of-place giant flying jellyfish. The desert is rendered as a beautiful place (aside from all the garbage), but deeply inhospitable.

Nate Piekos is given an unenviable job lettering all the captions and dialogue. Because much like everything else in Shaolin Cowboy, there’s a lot of it. The Komodo Dragons constantly provide commentary on events throughout the story, sometimes losing focus and going on tangents. But much of the dialogue is given rhythm through liberal use of italics and boldface, especially for the baby man near the end of the issue. Speechless skeletons communicate only through lowercase “clik clak.” It all helps give the dialogue personality, which is important for such larger-than-life characters.

Shaolin Cowboy: Cruel to Be Kin #1 continues to maintain Darrow’s off-kilter sense of humor and spectacle. It’s a comic that feels like something that only Geof Darrow could make, which is one of the highest compliments a comic can get. It’s out today from Dark Horse, so make sure to pick one up.

The Shaolin Cowboy gets a third title: Father. Hopefully he'll make for a better dad than he did a monk.Review: A Dragon's Dad in SHAOLIN COWBOY: CRUEL TO BE KIN #1