Review: A Curse Travels Through Time in THE DOLLHOUSE FAMILY #2

After the brutal death of her father and subsequent wrongful imprisonment of her mother, young Alice is sent to a state orphanage where she is tormented by other young girls. Fortunately, her favorite dollhouse has followed to keep her company in these trying times. The house continues to offer Alice a place to stay in happiness with the rest of the family, with a price to be paid of course. Meanwhile, the house decides to take us on a trip down memory lane, to see how exactly this family came to be. 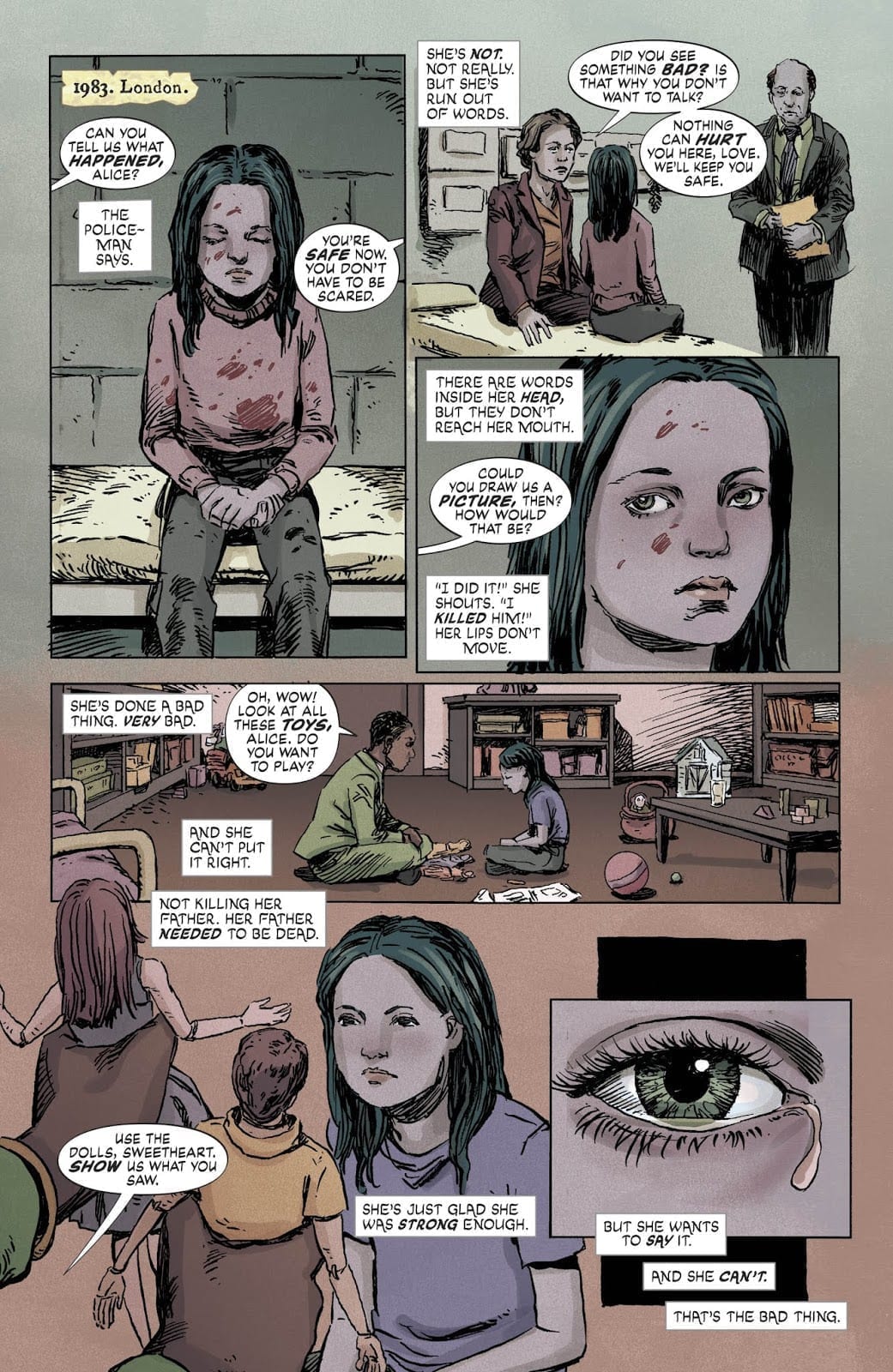 Acclaimed writer M.R. (a.k.a. Mike) Carey is no stranger to complex plots. His years of work on Vertigo titles such as Lucifer, Hellblazer and The Unwritten have proven that. As such, it’s an unsurprising relief that he hasn’t lost his touch with “The Dollhouse Family.” The story juggles two simultaneous plot lines that take place a century apart. Despite this, there is neither confusion nor disappointment when leaving one plot for another. The engrossing “present” story with Alice in the orphanage is matched in its compelling nature by the chilling origins of the dollhouse itself.

Carey once again flexes his ability to write in numerous dialogues and styles. Every bit of dialogue, from present casual British English to 19th century Scottish slang, feels natural and particular to each character. Carey’s taste for mysterious slow-burn mystery and horror shines through in this second issue. The desperation and stakes Alice faces swell into a dramatic crescendo by the issue’s end. This is joined by the suspenseful story of the parallel plot, which is written like a carefully executed demonic horror film. Specific revelations and cliffhangers in this chapter will make the wait for issue #3 a daunting concept. 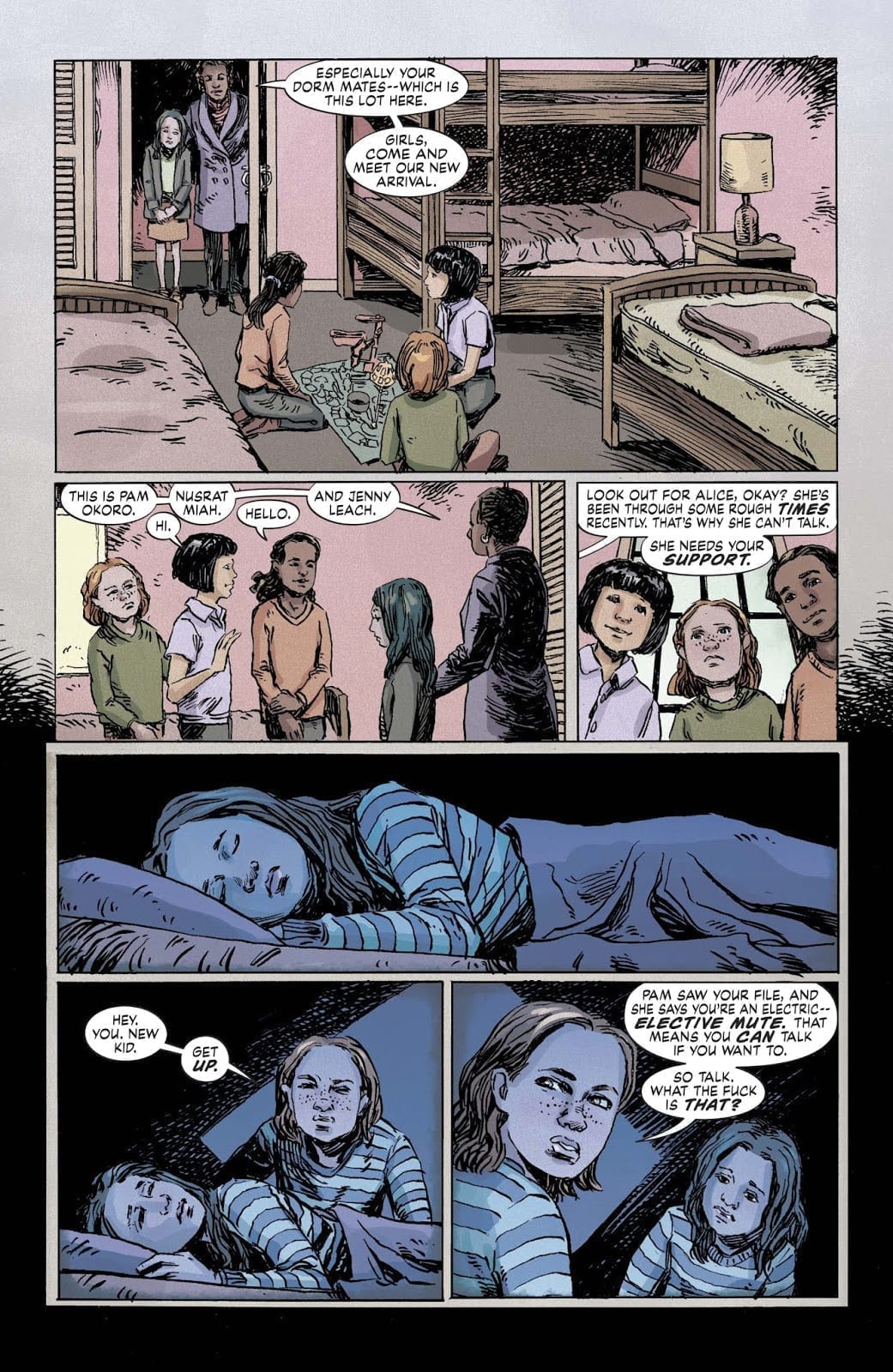 Vertigo alumnus Peter Gross (Lucifer, The Unwritten) and Vince Locke (Sandman, A History of Violence) provide perfectly appropriate layouts and pencils respectively to “The Dollhouse Family” #2. Gross’ layouts provide intricate plot direction for the reader’s eyes to wander through smoothly. Locke’s easily recognizable line and ink work provide excellent and often dread-inducing visual detail. Characters are all recognizably different, and emotional expressions ranging from sadness to fear are compelling. The colors in “Dollhouse” have a dreary effect on the atmosphere, and this is meant in a positive manner. This style replicates the newspaper print colors of comics of old, and reinforces the mysterious horror atmosphere this comic so perfectly encapsulates.

The lettering from Cris Peter aids the atmosphere and reading experience in the best ways lettering can. Normal spoken lettering is given a by-the-book font, but internal narration narration from the “Dollhouse” itself are given their own unique lettering. These other fonts not only help differentiate speakers, but also add a sense of ominous mystique to the “Dollhouse” and its plot. The lettering is not unlike that of Lucifer Morningstar’s in Lucifer and Sandman, if that’s any indicator for the gravity of this character’s presence. 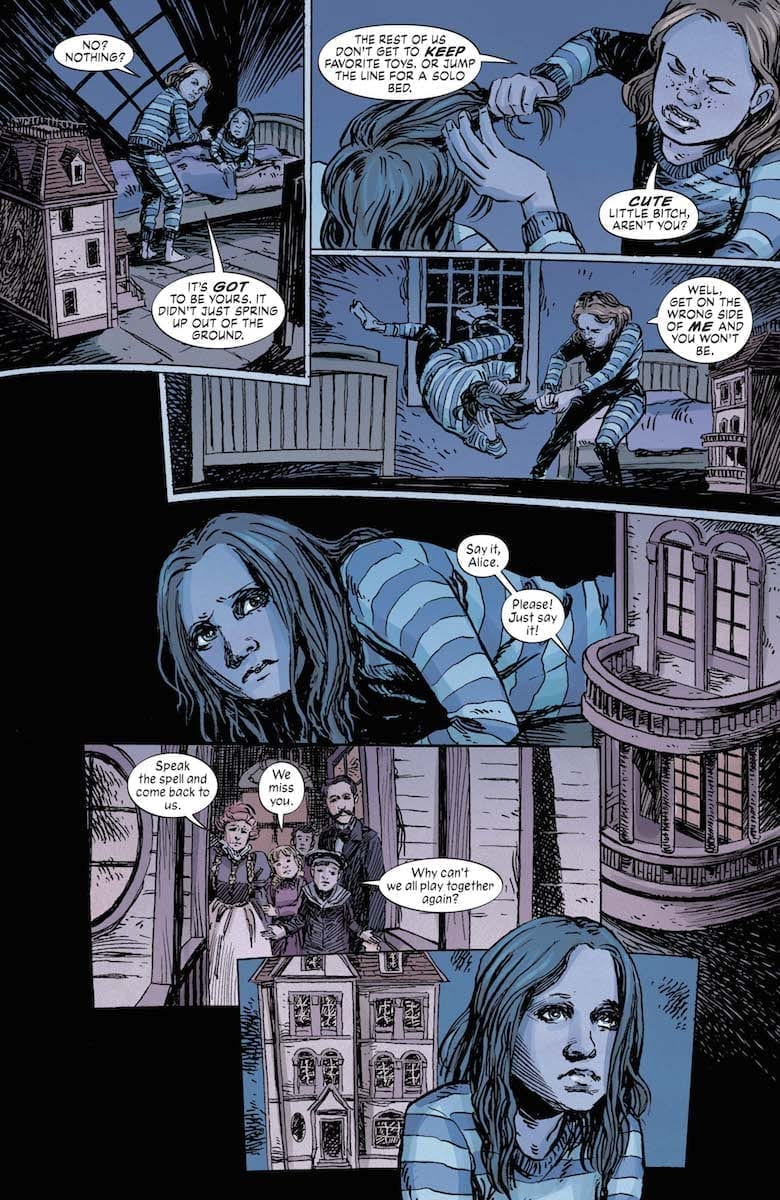 “The Dollhouse Family” #2 is a wonderfully macabre and devilishly strange follow-up to a fantastic debut. This issue takes more time to acquaint the reader with the story’s overarching plot and slow-burn storytelling method. M.R. Carey’s plot construction and dialogue continues to be among the most intriguing and well-constructed in the comics medium. Peter Gross, Vince Locke and Cris Peter all combine their talents to create an eerily engaging visual aesthetic for the series. Head to your local comic shop to keep this one in your file come 12/11.

1925
Find out how to get the
Monkeys Fighting Robots magazine!

Boom! Studios' Mighty Morphin Power Ranger series has been a delight for fans for 54 issues, and the fifty-fifth issue is no different. Out...
Read more
Comic Book Reviews

Review: YOU LOOK LIKE DEATH #2 Is Strange And Normal All At Once

Dark Horse's Tales from the Umbrella Academy: You Look Like Death #2 — written by Gerard Way and Shaun Simon, with art and colors by I.N.J....
Read more
Boom! Studios