Darwyn Cooke’s passing to cancer hit the comic book industry hard as he was one of the greats who truly understood the joy and wonder of comic books, particularly with superheroes. His talents expanded further than just being a comic book artist, he was also a great writer, director, and animator. While the Eisner award-winning artist is gone his work lives on and thankfully most of it is fantastic.

Cooke has done everything comic related from adapting novels, to creating his own mini series, to full ongoing series. It’s hard to go through his bibliography and pick a favorite, as it seems like he was breaking new ground with every comic he drew/wrote. The five comics featured below are definitely considered to be some of his best work that has resonated with audiences the most. Darwyn Cooke’s brief stint with Spider-Man is a very funny, comedic look at the character. This issue shows Peter Parker in a bizarre Valentine’s Day Situation. Peter gets knocked around by the Vulture on Valentine’s day, when he scheduled two dates with two different women. It’s a simple premise that doesn’t have a lot of Spider-Man’s traditional action, but it’s how Cooke handles Spidey’s large cast of characters is what makes the book so much fun. Each of them has great reactions to Valentine’s day, and the dialogue between everybody is natural, yet witty. Also, it features J. Jonah Jameson drinking coffee with a laxative in it… that alone should be worth the price of the issue. Darwyn Cooke worked with Ed Brubaker on a Catwoman series, and Cooke wrote a four issue arc to kick off the run. What makes this storyline, and subsequently the entire Catwoman book work so well, is that each story is treated like a great heist flick. They all have great stakes, memorable characters, and there’s a wonderful Noir feeling to the story. Plus Catwoman may be written perfectly in this series. She’s witty, funny, and seductive in the way only Catwoman can be. Plus she’s taking on the famous Batman mobsters, the Falcone family.

Adapting a novel to a comic book must be one of the most difficult tasks for any writer/artist. But Darwyn Cooke seems to do it with ease as he draws the infamous career criminal Parker to life in this adaptation. The comic is drawn in that typical 60s style Cooke was so fond of, and obviously here it works even more considering the story is set in the 60s. But, this adaptation is so direct and specific that it feels like it was written by the original writer Richard Stark. In fact some people consider the graphic novel better than the original book, because the art captures the mood Stark was portraying in his series of novels. 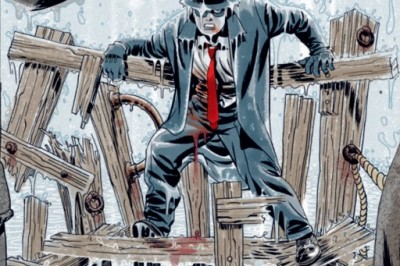 Back in 2006, Will Eisner’s famous creation, The Spirit, got a series to himself written and drawn by Darwyn Cooke. It only lasted twelve issues, but the twelve issues are perfectly reminiscent of Eisner’s great hero. The new stories are a great introduction to the character for anyone who doesn’t know anything about him, but they’re also unique enough to stand on their own two feet. And there are issues that do feel like they were crafted by the legendary Will Eisner himself. It’s a shame the series got canceled, because there were some great stories in it. Including a crossover with the Dark Knight. And yeah it’s as awesome as it sounds.

DC’s “elseworld” concept has created a lot of great stories (most of them involve Batman), but of all of them this is one of the best. Written and drawn by Darwyn Cooke, it shows the DC Universe in a transitional period. Set in the 50s, we see Superheroes become affected by a changing world. As the Cold War sets in and the fear of a red flag taking over the U.S. Superheroes are becoming more feared. Many of them, including Superman himself feel that they aren’t needed anymore. But, they push on, and discover that they are needed more than ever. What really makes this book work is that we also see wildly different characters experience some very unique problems. The book is treated seriously, but still has a sense of joy and optimism, and it is hands down Darwyn Cooke’s best work.

So, there it is, the five best stories by Darwyn Cooke. Let us know in the comments below what your favorite story or artwork by him was. The comic world will miss him dearly, and hopefully his work will live on forever.