Power Rangers: Drakkon New Dawn #1 is the beginning of a spin-off to Boom! Studios’ main Power Rangers series. The story written by Anthony Burch, with artwork by Simone Ragazzoni, colors by Raúl Angulo, and lettering by Ed Dukeshire, focuses on the World of the Coinless trying to recover after the Shattered Grid crossover event. 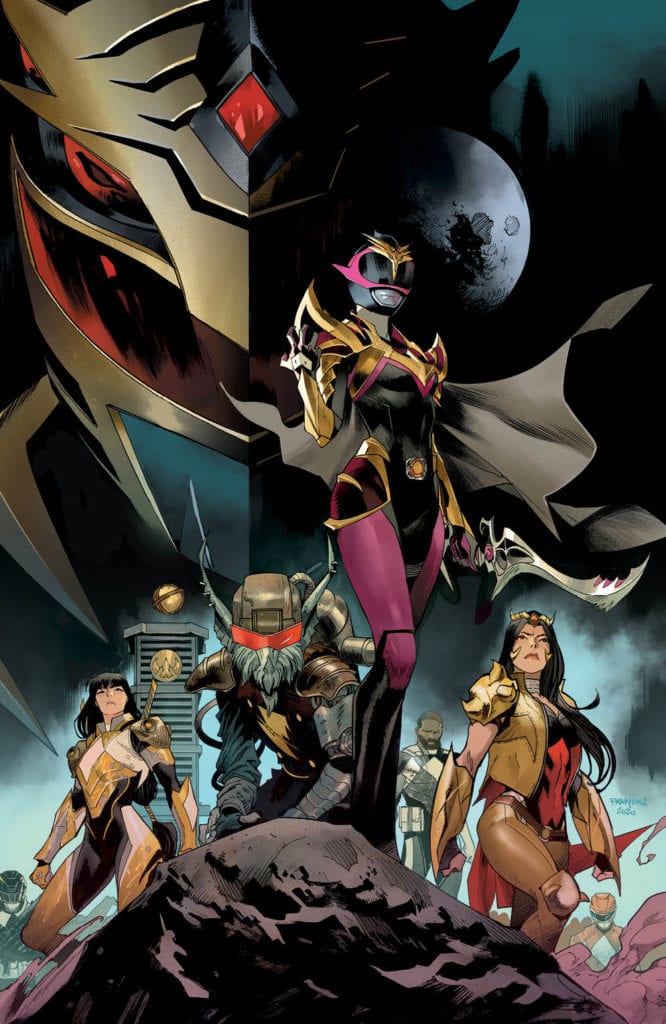 Burch stepping out of his partnership with John Carpenter and the horror genre pens Power Rangers: Drakkon New Dawn #1. Continuing off of Power Rangers: Ranger Slayer, a post-upgrade Kim is trying to lead a rebuilding of her reality’s society. But things are not easy as old wounds in both of Coinless and Power Sentries are manifesting every other day. All of which reflects in the company Kim keeps. Some include her former ranger teammates who know her brainwashing into the Ranger Slayer and old enemies like Scorpina, whose condescending attitude makes it hard to be in the same room with. Yet it’s the struggle to find tolerance that makes the rebuilding efforts worthwhile. Because not all of who went against Drakkon or joined him are purely good and evil, respectively, some of the Sentries only wanted to protect those they could under Drakkon’s rule.

So Kim takes it upon herself to dismantle any remains of Drakkon’s influence, starting with a prison. Years of trauma continue to haunt this place, especially in the prisoners. One prisoner, in particular, serves as what kickstarts the story as a reminder of Drakkon’s aftermath. Drakkon may be gone, but he leaves behind a nasty surprise that may push Kim and friends to the brink.

Ragazzoni gives a distinctive look to the world of Power Rangers: Drakkon New Dawn #1 in terms of character design. Most characters not in Ranger suits look worn out and ready to break. It’s a display of the amount of trauma that still resides in the World of the Coinless. However, the Ranger suits are more or less masks to hide their exhaustion. It’s merely a means of keeping themselves together in a world where these suits are the marks of Drakkon’s influence. No one displays that better than the Prisoner Ranger whose crudely put together design demonstrates his place in a terrible surprise from Drakkon.

Angulo’s coloring in Power Rangers: Darkkon New Dawn #1 shows a grim bleakness throughout the issue. While the brighter colors do appear throughout the issue, the muted atmosphere and flat colorizations hold the brightness back. In fact, when color with more luster appears later, it’s not life returning to a barren world, it’s a harbinger of destruction. 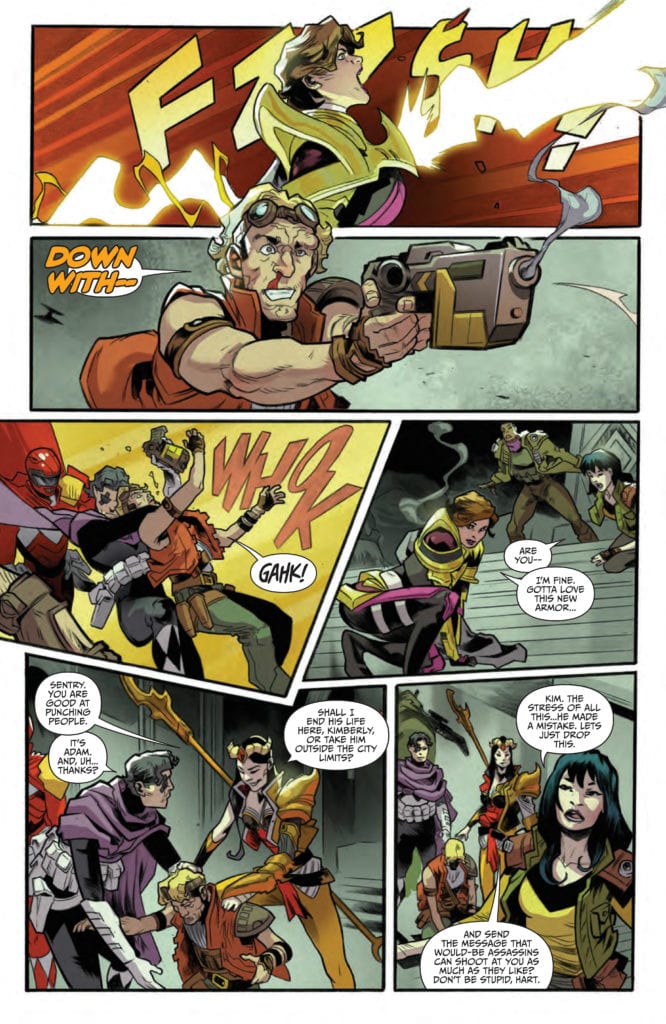 Dukeshire provides lettering that is uniform, never straying from the panels. Some of the fonts even get a stylization to coincide with the emotional states that characters are in. A boat of rage is often with an orange font word. Caption boxes stand out enough for readers to follow them without getting in the way of the images. But what really stands out are the wordmarks that possess details that are drawn for this very occasion. They are not extremely bright, and the flat colorization belies their impact as they jump between panels.

Power Rangers: Drakkon New Dawn #1 begins an exciting spin-off series that displays how an already bleak setting can get even worse. Yet the creative team is going to make this series something fans will never forget.

What do you all think? Is it time to move on from Ranger Slayer and Drakkon? Or do you want to give this series a try? Leave your thoughts in the comment section below.

A spin-off shows that Boom Studios! Power Rangers isn't quite finished with the legacy of its iconic villain; and it's as menacing as ever.POWER RANGERS: DRAKKON NEW DAWN #1 - Recovery Scars