ORPHAN AND THE FIVE BEASTS #1: Tribute To Kung Fu Flicks

Dark Horse’s Orphan and the Five Beasts #1 begins creator James Stokoe’s tribute to Hong Kong cinema. With all of the rip-roaring energy and absurdity of the wuxia genre, this series blasts onto shelves on March 17th.

Orphan and the Five Beasts #1, in its first half, wears its influences on its sleeve. James Stokoe tributes the cult movie Five Deadly Venoms by sharing the film’s general outline. We follow the last student of a dying kung fu master, Orphan Mo, in her quest to slay her predecessors. But there’s a complimentary twist to the kung fu plot formula. 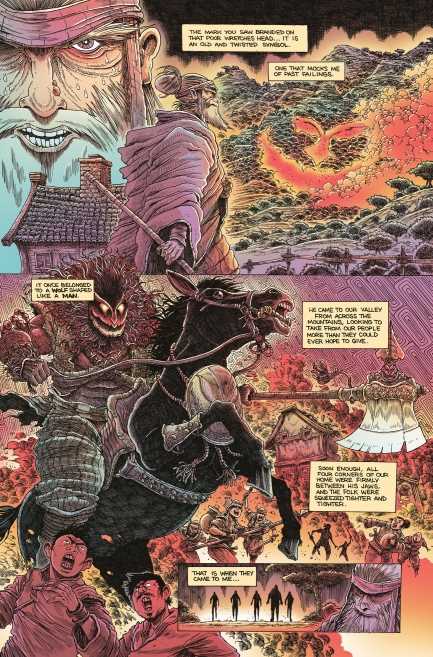 A common trope to this genre is that after the villain is defeated, the movie ends. Mo’s predecessors, the Five Beasts, were once heroes of their own story, fighting against an evil warlord. This series delves into what happens after that story ends and it’s not good. The Five Beasts’ lack of discipline caused them to become corrupt and supersede the warlord. Mo’s quest is not simply about defeating an enemy like the Beasts, but reclaiming her master’s honor. It’s a basic, yet intriguing, plot about a film genre.

Orphan and the Five Beasts #1: In HD! 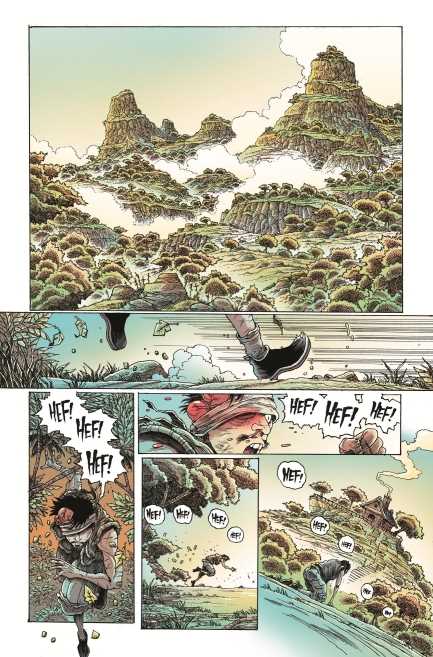 Stokoe gives Orphan and the Five Beasts #1 the majesty and absurd energy of a kung fu movie. The mountainous regions look absolutely mythical, extending into the clouds. The green landscapes look so peaceful, yet a person’s look of panic manages to disrupt the peace with its red accents. The fight scenes look finely stylized and cartoony. Mo is able to defeat thugs easily with a showy attack on her attacker’s crotch. It shows the reader that the hero can handle herself just fine. Which is good because her first major opponent is so absurdly powerful, with the issue’s deadly cliffhanger. The guy crushes horses he’s riding with his thighs!

The lettering has a large amount of uses aside from simple word balloons. The standard word balloons display someone in good health and emotional stability, unlike the word balloons of the sick master which crumple and emotional outbursts that have jagged edges and stylized words. Plenty of showy sound effects decorate actions like the noise generated by thunder thigh’s leg muscles. It’s all so eye-catching it’s impossible to look away.

Orphan and the Five Beasts #1 excitedly bursts right out of the pages. Loud and stylized sequences decorate the pages for some hard core action thrills. And it’s now available wherever comics are sold.

Orphan and the Five Beasts #1 tributes kung fu classics with all of the absurd energy associated with it.ORPHAN AND THE FIVE BEASTS #1: Tribute To Kung Fu Flicks