Chip Zdarsky is a writer and artist that you can’t put in a box. He’s co-created projects like Sex Criminals, which was hilarious and strangely sweet at times. He has written Howard the Duck, The All-Nighter, and Public Domain (which he also draws), all of which are gloriously campy. His writing often has a tongue-in-cheek quality to it. His art is sometimes full of dick jokes and porn parodies. But then, he goes and writes something like his guest issue of Crossover. Crossover #7 is a beautiful, soul-bearing work about how the person you fear most is often yourself. Then there’s Newburn, Zdarsky’s gritty noir series about a private eye that works for the mob. Zdarsky is a creator who is incredibly hard to pin down.

Zdarsky isn’t the first person you’d think to hire for Batman, but thank God DC did. His work on the series so far has already shown his incredible creative range. And there’s a brilliance to how his works pulling in so many directions — a brilliance that he imbues his Batman run with. As this run opens in issue #125, we see a Batman who feels incredibly introspective. Bruce is suffering from nightmares which seem connected to past traumas, and he spends most of his time wrestling with doubts about his mission. He also feels quite fallible. Over the course of the run to date, we see him get to the scene of a crime once it’s too late. We see him dragged behind his Batmobile, concussed and desperate. But the moment we’re tempted to label Zdarsky’s Batman as vulnerable, we see him fall from outer space and walk it off like nothing even happened. Is Batman a man or is he a god? This Batman is paradoxical and contradictory. He’s impossible to define or place limitations on, just like Zdarsky himself.

And series artist Jorge Jimenez is perfectly paired with Zdarsky for the job. Jimenez can make Batman look like a gargoyle, looking down at Gotham City with all the immortality of a twisted statue. But Jimenez also makes Batman look so human. Jimenez shows the fear in Bruce’s eyes as he fights. He shows Bruce’s quiet sadness when he loses. We get just as many times in the pages of Batman where Bruce looks as small and powerless as he does big and untouchable. 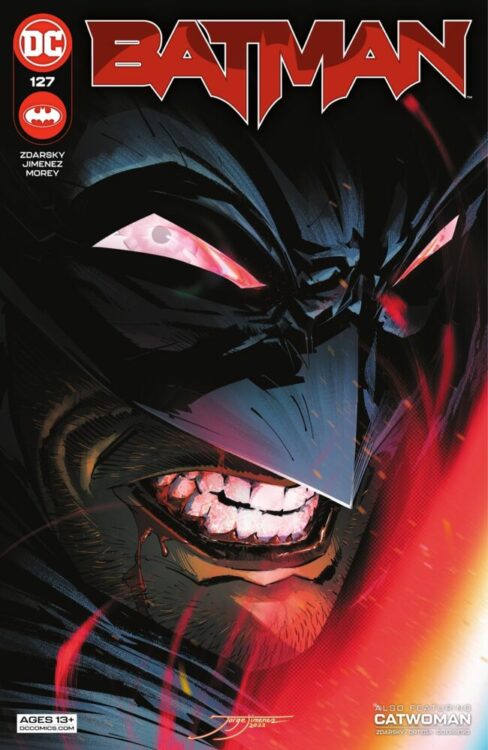 Comics are complicated. The whole cast of characters in Batman walk a tightrope of indestructability and temporality. Zdarsky and Jimenez often seem to be bucking up against the bounds of comics in this way. They can maim Robin, put Batman in a coma for a while, but we’re constantly reminded in these pages that these people don’t die. Even when Bruce thinks back on the traumatic events of Death in the Family, he’s remembering the death of a character who’s currently walking around Gotham City, instead of being six feet under. So when Bruce is zapped into dust, Tim Drake doesn’t skip a beat. Issue #131’s backup story, “The Toy Box” — drawn by Miguel Mendonça — shows Tim saying with conviction: “He’s not dead.” And we know that’s true. Batman doesn’t die.

There’s a creative wall that superhero comics have set up over the years. Superheroes don’t die. And if they do, they always find a way back. But you can almost feel Zdarsky and Jimenez walking up to that creative wall and feeling it for weak spots. “Okay,” they seem to say. “We can’t kill them… but what can we do?” 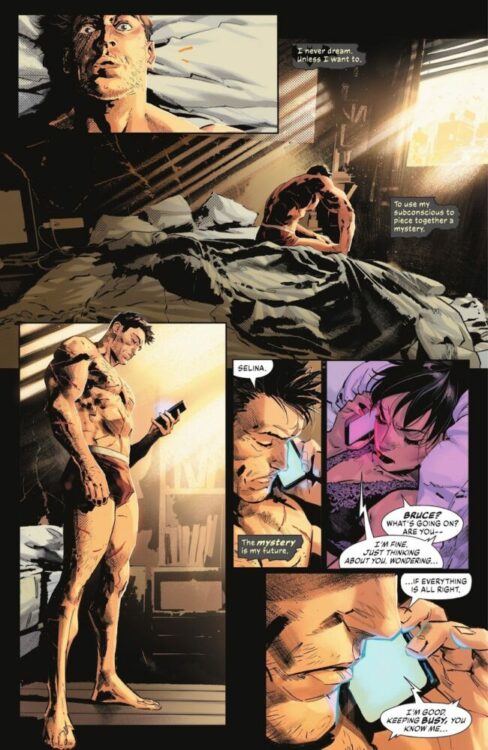 With all of these themes at work, Zdarsky’s run feels both versatile and balanced. For every moment of pulpy action, you have a scene of thoughtful contemplation, the best example of which is the beautiful back up story “I Am A Gun” with art by Leonardo Romero. Zdarsky’s Batman offers everything. It’s charming, action-packed, and introspective. It asks a very simple question: “Who is Batman?”

The answer is just as elusive as you want it to be.