Non-Stop Spider-Man #1 rockets out on March 10 from Marvel Comics. Veteran writer Joe Kelly takes the reader on an intense joyride thanks to a simple plot. Penciler Chris Bachalo provides a highly dynamic look for the plot’s pace. The layouts and pacing are so fast, inker Tim Townsend and colorist Marcio Menyz have to keep the reader on point. Lettering by VC’s Travis Lanham deserves a special mention for placement’s sake.

Non-Stop Spider-Man #1 is when Joe Kelly showcases superhero action with a simple plot. Taking place in Peter Parker’s college days, this issue has all of the energy from Spider-Man’s early days with Stan Lee and Steve Ditko. By keeping the plot simple, the pace moves linearly to complement the art. Even if it looks like Spider-Man will have to juggle multiple tasks at once, a gang with resources and a new street drug that’s affecting people in Peter’s circle will do that. So it’s great that flashback sequences feel slower to let the weight of those situations sink in. 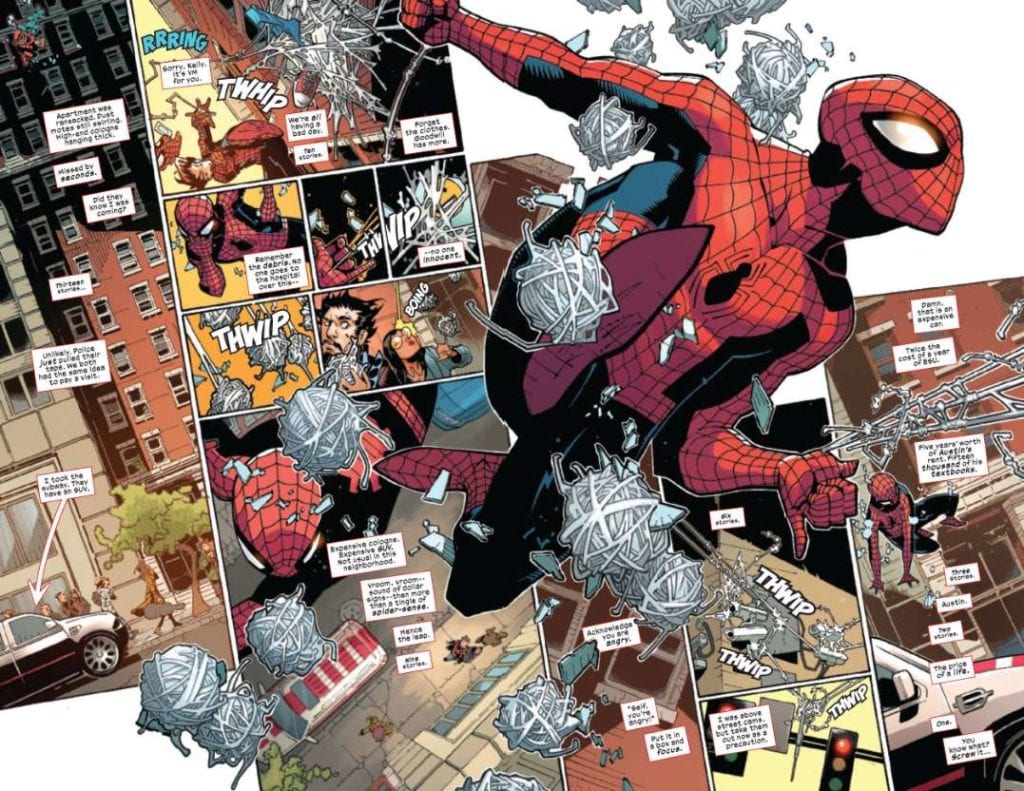 The real highlights of Non-Stop Spider-Man #1 come from the dynamic art style. Bachalo’s art keeps the present time on an angle to demonstrate the speed at which events play out. Everything looks like it’s moving so fast, there are many “blink and you’ll miss it” moments. Did jumping out of a window right off the bat distract you long enough for Peter to change costumes? Because the inking by Townsend does bolden on moments of impact and plot relevancy. Directly below Peter in one long panel is a van he’s chasing. This, along with the red costume against darker backgrounds by Menyz, keeps the reader on point.

Now compare all of this to flashback sequences where the panels straighten out. Because these events happen in the past, everything slows down as if building up momentum for the present. Not only that but with the colors of a funeral scene making everything look part of the environment, Parker genuinely feels stuck in the moment. When Peter is applying himself with a bright blue jacket to stand out from the background, momentum picks up.

Lanham’s lettering doesn’t just extend out of actions; they juxtapose the situation. Like most SFX, they serve to highlight certain objects or moments of impact. A ringtone in juxtaposition with a caption immediately following it practically screams the pace. So many things are happening, Peter’s mind can barely keep up. There are even times when the Spidey Sense practically speaks out in words like in Into The Spider-Verse. Only this isn’t merely a callback; it’s Spider-Man’s power instructing him to act quickly of oncoming dangers.

Without captions or word balloons, the reader more than likely sees Spider-Man springing into action for no apparent reason. It would still be exciting to look at, but a little more story goes a long way. A big two-page spread, in the beginning, features so many things happening at once; the many captions slow the reader down. This puts readers into the head of Spider-Man as he pursues a mafia while using his webbing to minimize collateral damage after jumping out a window. There’s a real feel of being “in the zone” within Non-Stop Spider-Man #1.

Non-Stop Spider-Man #1 Will Take You For A Ride

Non-Stop Spider-Man #1 will fill a reader with excitement with its sense of time and energy from start to finish. If anybody has ever wanted to feel what Spider-Man goes through in the comics, this is the place to find out.

Non-Stop Spider-Man #1 is a creative exercise in the energy and characterization of the Wall-Crawler.NON-STOP SPIDER-MAN #1: A Blink And You'll Miss Thrill Ride