Ninjak #1 from Valiant Entertainment comes to comic stores on July 14 with a fresh new take on espionage stories. Joining writer Jeff Parker and letterer Dave Sharpe is cartoonist Javier Pulido. The unique art style of Pulido blends together with a story where a world these spies inhabit turns upside down.

Ninjak, AKA Colin King, is the last of MI6’s Ninja Programme, after cutting ties with the corruption backing it. Since then, Colin King is making his way as a mercenary for hire. 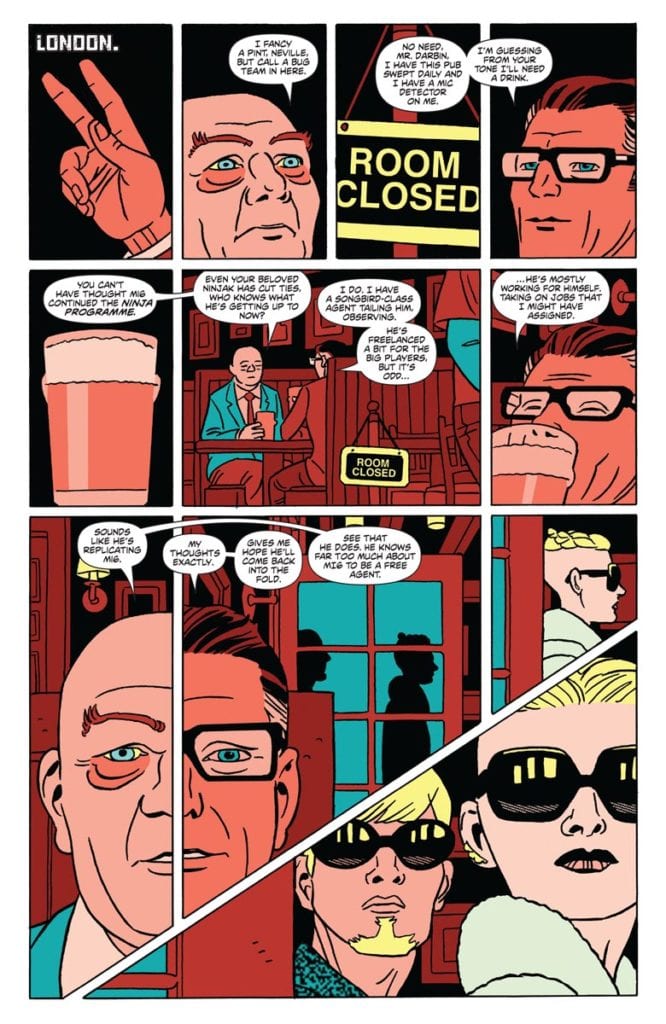 Ninjak #1 has Parker get every character out of their comfort zones. With a plot of spies’ secrets being revealed, it takes a unique approach to show how drastic it is. With Pulido co-writing the story, the plot’s progress matches up with its layouts. Take for example the initial pages where the orderly conversation between two spies are interrupted. As a triangular panel barges into the page, it serves as a point where power is taken from MI6. 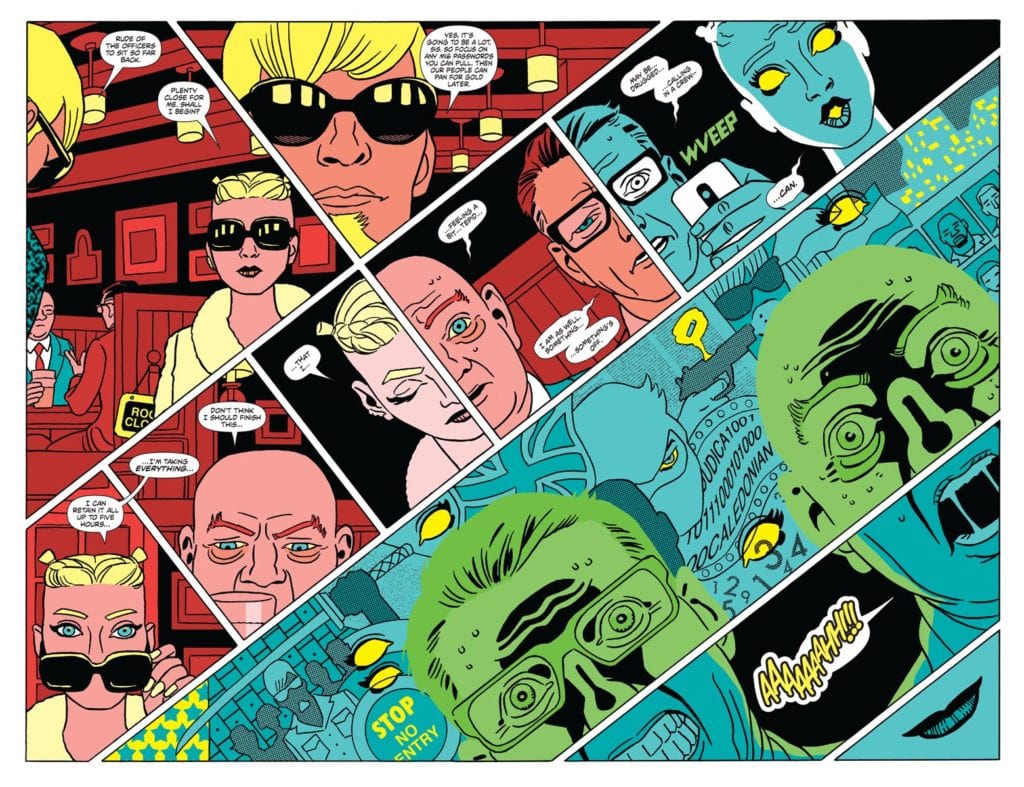 If that isn’t enough, the next page features a spread where the perspective shifts diagonally. In addition, the pages coloring changes from its initial red into mesmeric greens. All while the antagonist smiles at her victims who are in pain. 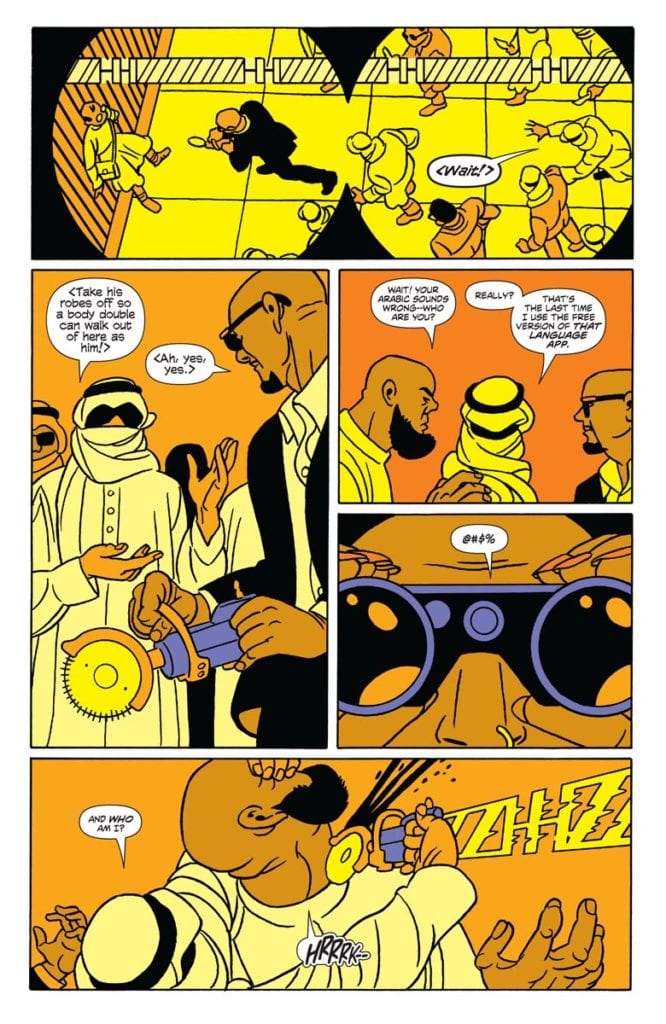 So with a setup like that, it’s going to require a hero who can keep up with this threat. Pulido decorates Ninjak #1 with SFX for eye-catching uses of tools, like a buzzsaw Ninjak takes from an opponent in the blink of an eye. While it’s cool to see how capable he is, Pulido also gives space for Sharpe to deliver exposition. The kind of exposition that reveal Ninjak is at disadvantage after his fallout with MI6. 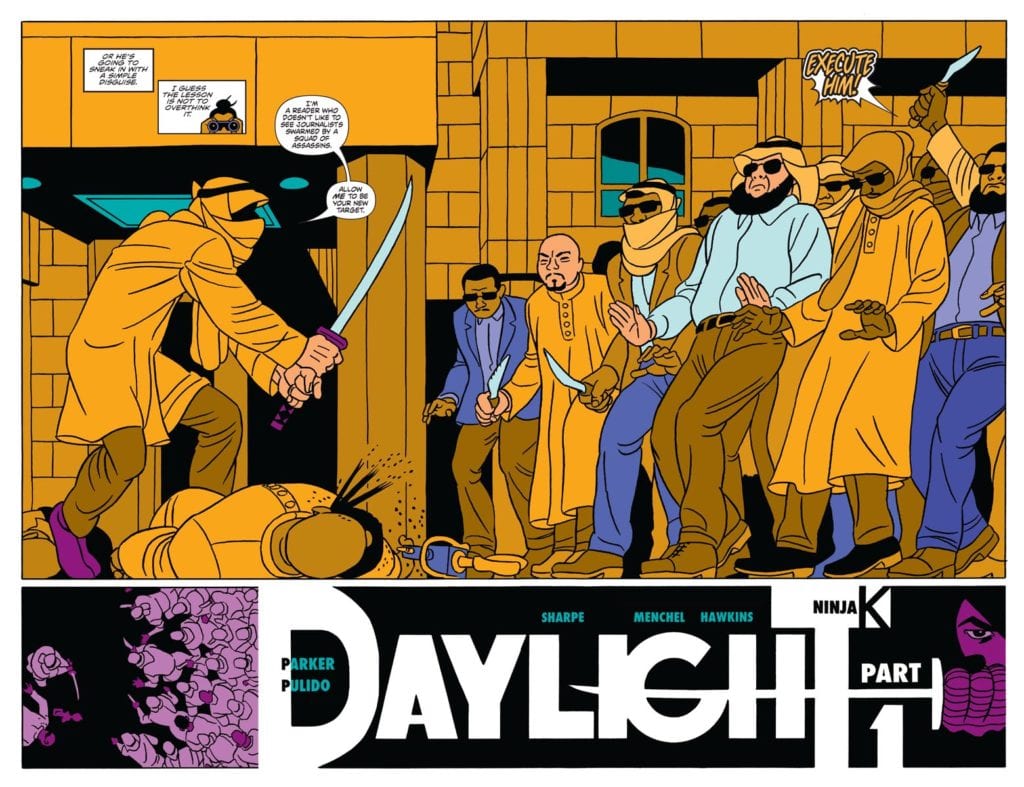 Stick Around For Ninjak #1

Ninjak #1 features the kind of action people expect from its title character and more. There is a threat brewing that the reader dreads from simply tantalizing pictures. Because in this presentation, the feeling of safety is never a guarantee.

Ninjak #1 makes the reader feel the tension the plot brings so that Ninjak can be the hero they need.NINJAK #1: Evoking The Psychological Action Through Cartooning