Going to the Chapel is an upcoming action romcom comic from Action Lab: Danger Zone, one that’s pitched as “Die Hard at a wedding, or Dog Day Afternoon meets the Runaway Bride.”

The series is written by Ringo Award-nominated David Pepose (Spencer & Locke), drawn by Gavin Guidry (The Death Defying), colored by Liz Kramer, and lettered by Ariana Maher. The covers are by Maan House and Gavin Guidry, with a special convention-exclusive variant by Lisa Sterle.

About the series:
Emily Anderson’s big day had become the wedding from hell — and that was before the bank robbers showed up. What do a conflicted bride, her dysfunctional family, a gang of Elvis-themed crooks, and one relentless sheriff have in common? They’re all about to discover love is the ultimate hostage situation. Fans of Sex Criminals, Jessica Jones, and 4 Kids Walk Into A Bank will say “I do” to GOING TO THE CHAPEL, available in comic shops and on digital devices Fall 2019!

We’ve had the pleasure of reading the first issue, and it’s well worth a spot on your pull list. It feels like something out of a Tarantino film, especially in the isolated, Western setting. David Pepose has proven his ability to tell an emotionally rich story and deliver gut punches with Spencer & Locke, and Chapel looks like it’ll be another action-packed roller coaster ride. (Click here to read our recent interview with Pepose and Jorge Santiago, Jr. about the upcoming Spencer & Locke 2.)

What Pepose and Guidry have to say about the series:

“Dating back to my catastrophic turn as best man for my oldest friend’s wedding, GOING TO THE CHAPEL has been an irreverent passion project long in the making,” said series writer David Pepose. “Think Die Hard at a wedding — or Dog Day Afternoon meets The Runaway Bride. With our unique mashup of action, humor, romance, and heart — not to mention our sprawling, diverse, and downright dysfunctional cast — fans of romcoms and thrillers alike are going to find lots to love about our offbeat and eclectic series.”

“GOING TO THE CHAPEL offered some really exciting challenges for me as an artist, including a solid, singular setting and a huge cast to play with,” added series artist Gavin Guidry. “Between the moments of action and comedy, our whole cast of characters were a blast for me to work with, and because our book touches upon so many different tastes and genres, I’m excited for folks to have a chance to read it.”

Get your first look at Going to the Chapel below: 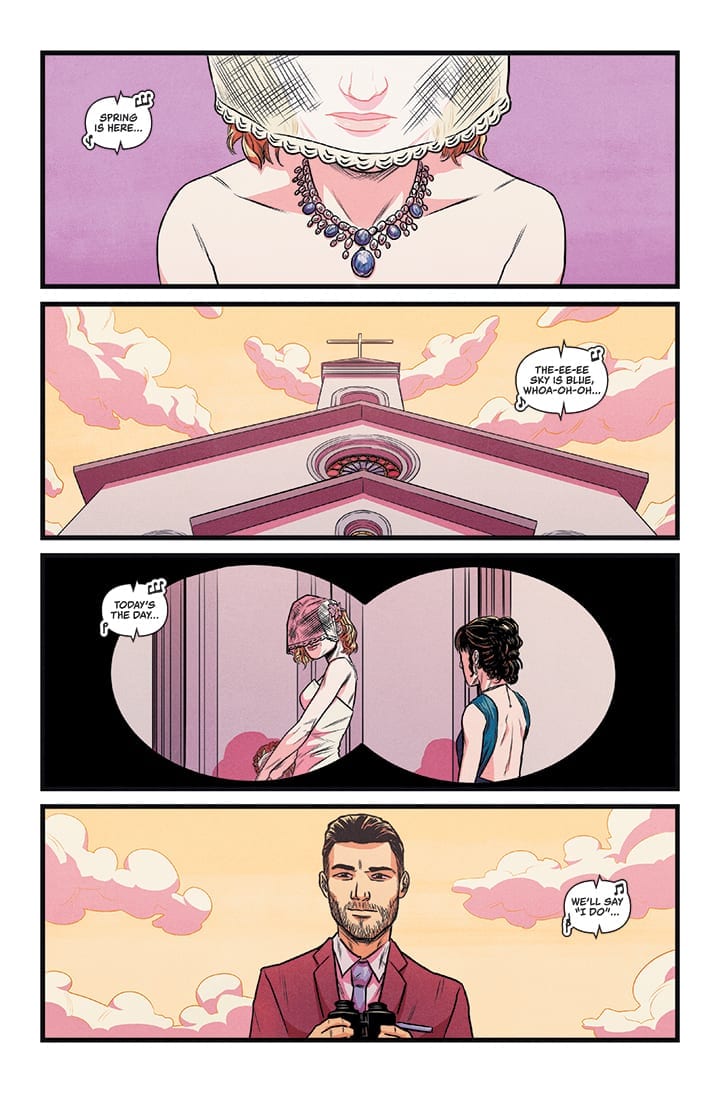 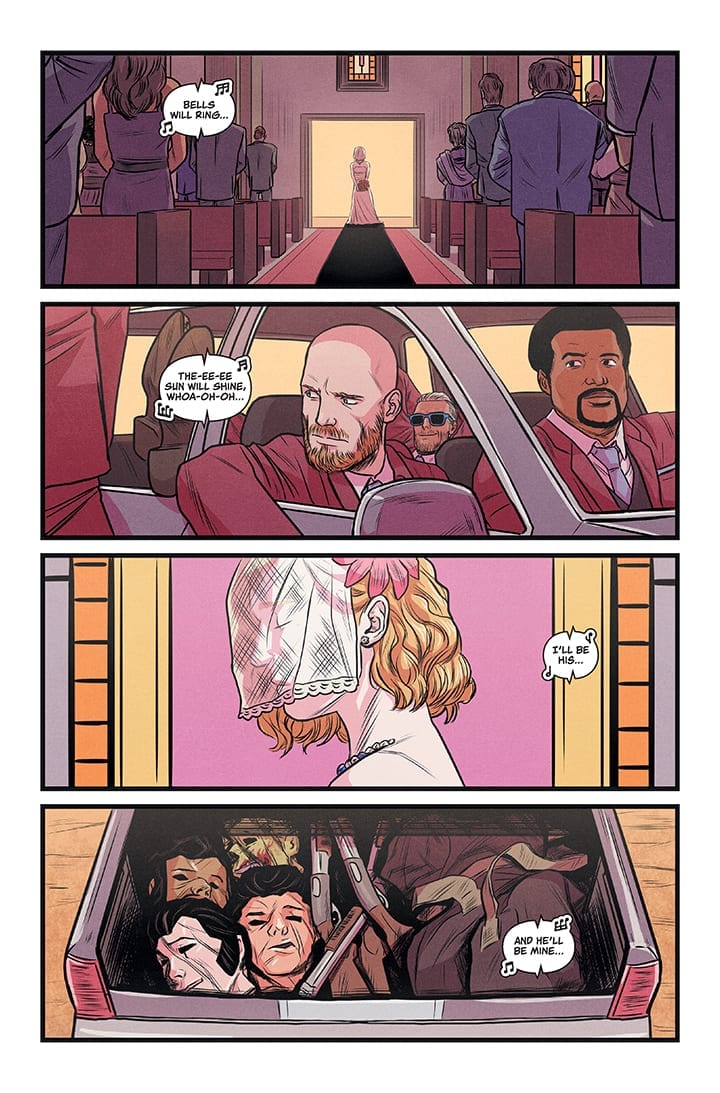 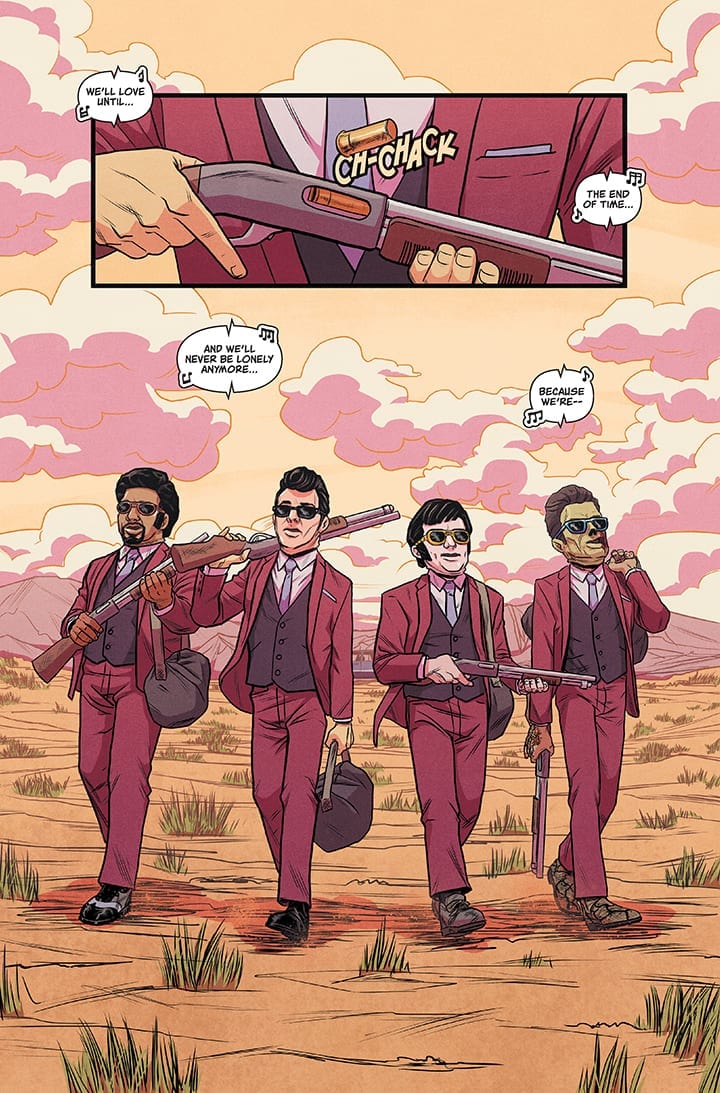 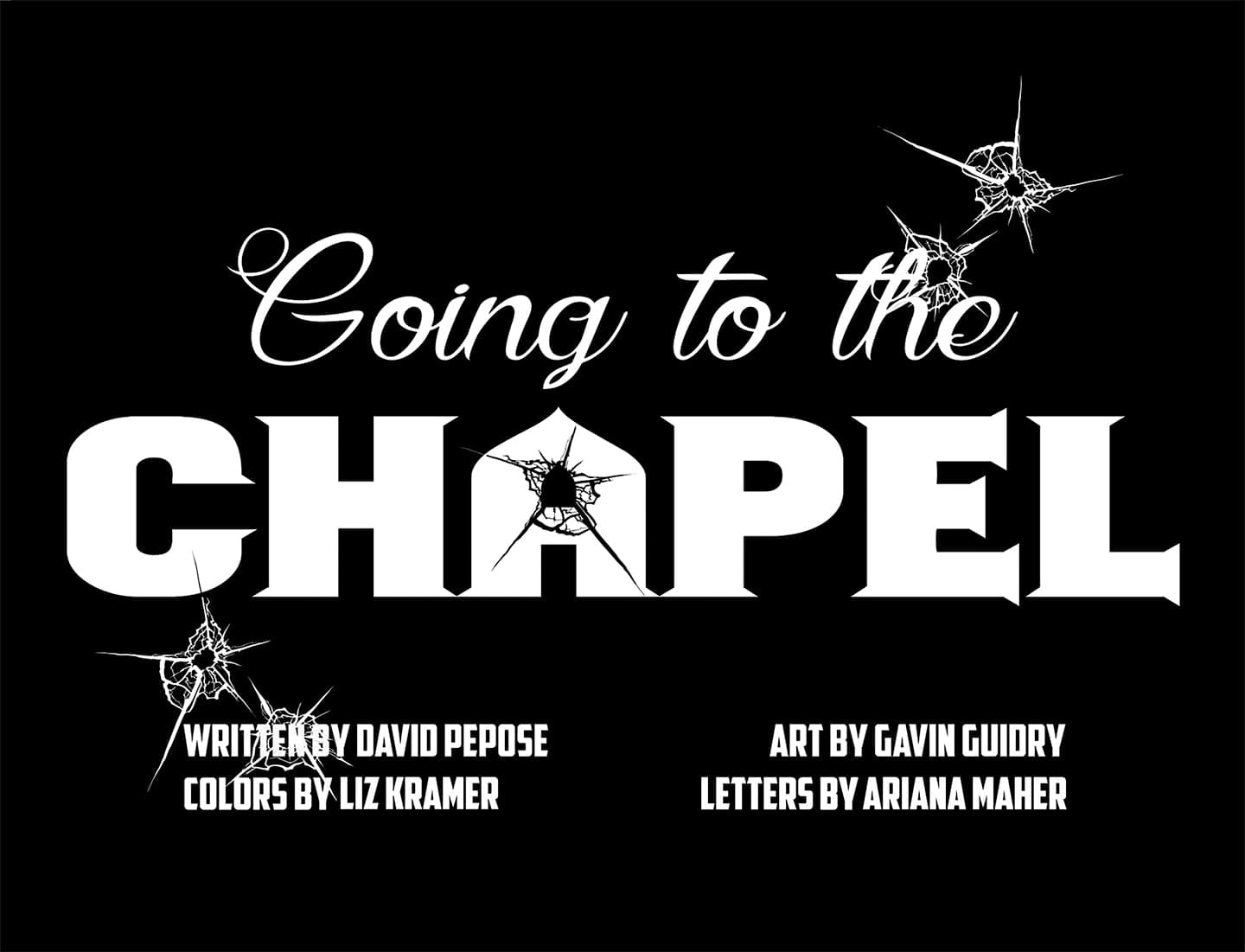 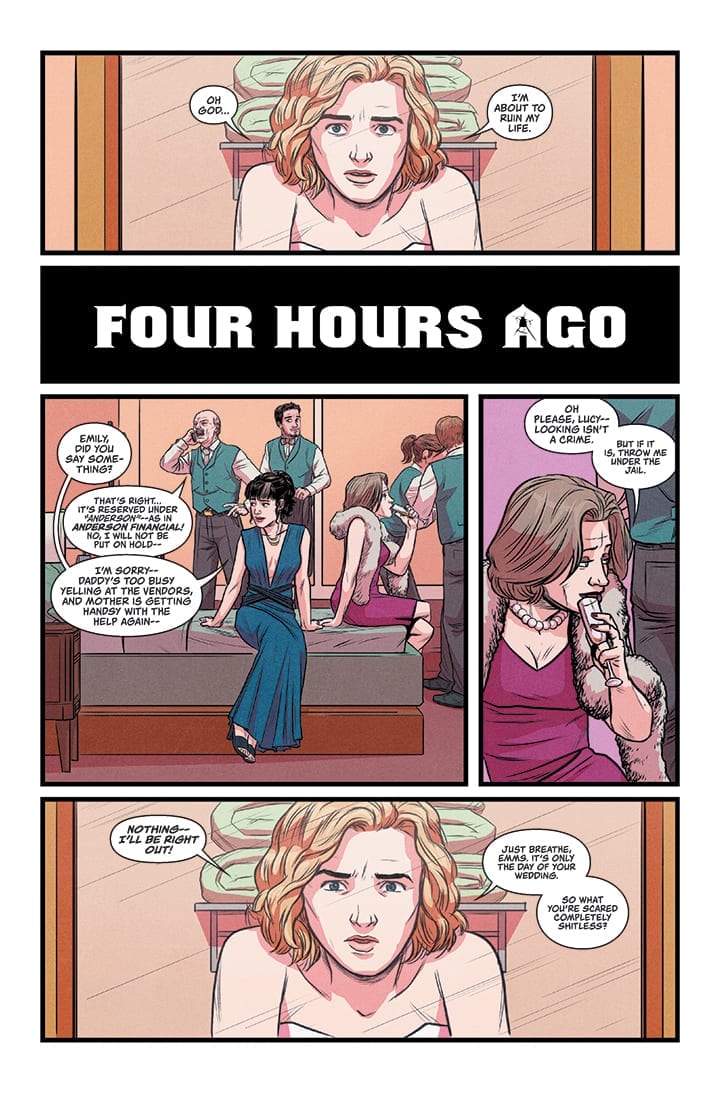 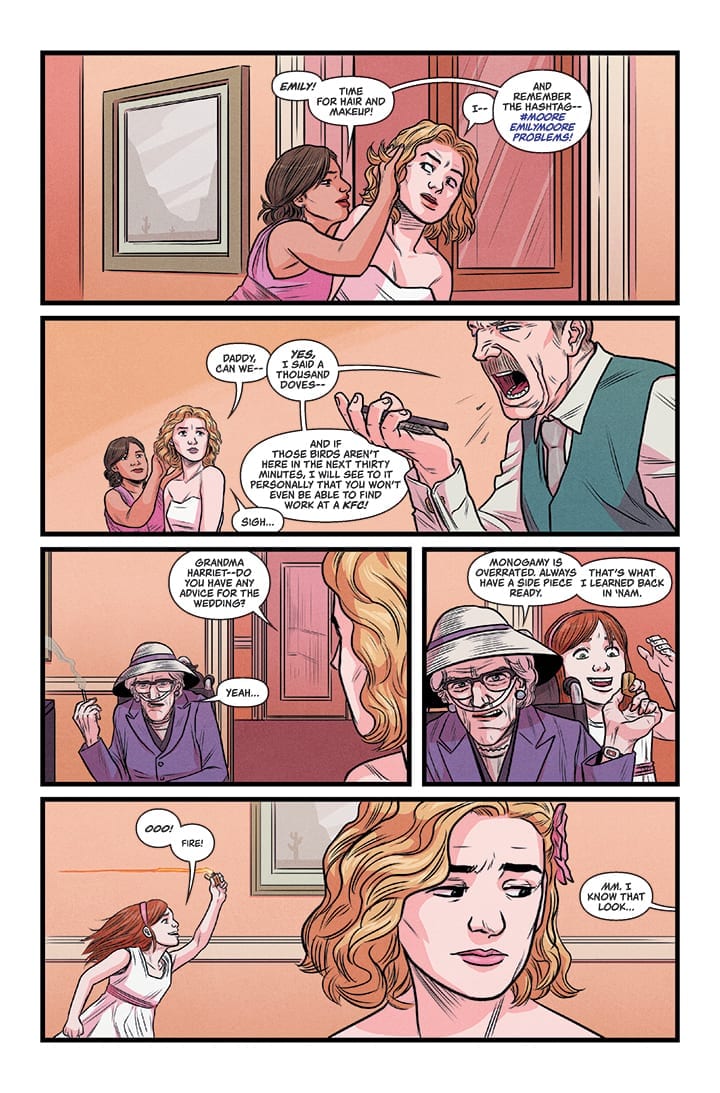 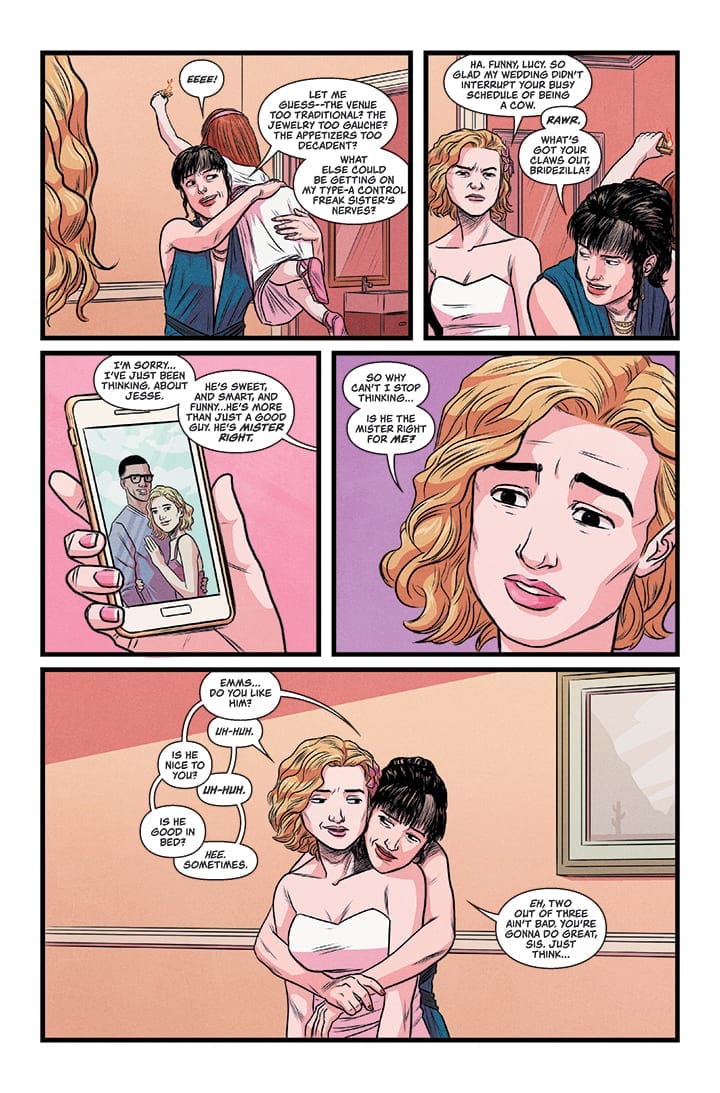 About the Creators:
A former crime and politics reporter, David Pepose is the Ringo Award-nominated writer of SPENCER & LOCKE, SPENCER & LOCKE 2 and GRAND THEFT ASTRO. He has also worked for numerous entertainment companies around the country, including CBS, Netflix, Universal Studios and DC Comics. A St. Louis native and a former New York City transplant, Pepose now resides in sunny Los Angeles, where he is developing several properties for TV, film, and comics. Follow him on Twitter at @Peposed.

A New Orleans native, Gavin Guidry has drawn several self-published titles including THE DEATH DEFYING and THE NIGHT DRIVER, as well as a historical graphic novel, THE BATTLE OF NEW ORLEANS, for the State of Louisiana’s Museum Systems. He also worked as a background assistant on Volume 2 of HEARTTHROB with Oni Press. Guidry currently lives outside of New Orleans with his wife and two children. Follow him on Twitter at @gavinguidry.

Elizabeth Kramer is a designer by day and artist by night. GOING TO THE CHAPEL is her debut as a comic colorist. A native of Tolland, Connecticut, she is a graduate from the Hartford School of Design with a BFA in illustration with a minor in visual communication design, and she is self-taught in the art of making comics. When not working the daily grind in Crown Point, Indiana, Kramer can be found working on her webcomic THREADER, participating in zines and anthologies. Follow her on Twitter at @lizkreates.

Ariana Maher is a comic book letterer who works with both independent imprints such as LittleFoolery and publishers such as Image Comics, Dynamite Entertainment, and Skybound. Recent projects include NANCY DREW, JAMES BOND 007, RINGSIDE, SFEER THEORY, FLAVOR, and OUTPOST ZERO. She tends to be wandering around comic book conventions in the Pacific Northwest. Follow her on Twitter at @CommentAiry.

About Action Lab Entertainment:
Formed in 2010 with the purpose of pooling their collective talents into a single, powerful entity, the members of Action Lab Entertainment have countless years in multimedia publishing, design, and business. Their first release, Fracture, was successfully funded through Kickstarter and since then they have continued their mission to produce high quality, genre-spanning entertainment.  Since its formation, the accolades for A.L.E continue to build on a daily basis. Among its more popular titles are all ages material like the Eisner, Glyph, Shel Dorf Award nominated series PRINCELESS, MIRACULOUS (based on the Nickelodeon Television series), Jamal Igle’s MOLLY DANGER, Artist/Writer Katie Cook’s GRONK and Gayle Middleton’s (My Little Pony, The Littlest Pet Shop) monstrously adorable VAMPLETS. Action Lab’s Mature Readers imprint ACTION LAB DANGER ZONE continues to push the envelope of comics entertainment with titles as varied as Charles Band’s PUPPET MASTER and Dan Mendoza’s over the top horror-comedy ZOMBIE TRAMP, VAMPBLADE and ITTY BITTY BUNNIES IN RAINBOW PIXIE CANDY LAND, and socially relevant titles including SOUTHERN DOG, KINGDOM BUM and M Goodwin’s TOMBOY.