Review: MIDDLEWEST #9 and the Heart of a Storm

Previously, in Middlewest, Magdalena believes that the raging tempest within Abel is incurable, and forces him to leave her travelling carnival. Abel’s anger gets the best of him, who unleashes the inner storm that destroys Magdalena’s fair. In the aftermath, Mags tries to rebuild, but faces resentment from her workers for shunning young Abel. Meanwhile, Abel’s father is still on the hunt for his son, and leaving a path of destruction in his wake. Finally, Abel and Fox continue on their quest for a cure, only to be chased down by giant squirrel creatures, and then surrounded by spear-wielding forest people.

Middlewest #9 is published by Image Comics, written by Skottie Young, with art by Jorge Corona, colors by Jean-Francois Beaulieu, and lettering by Nate Piekos. 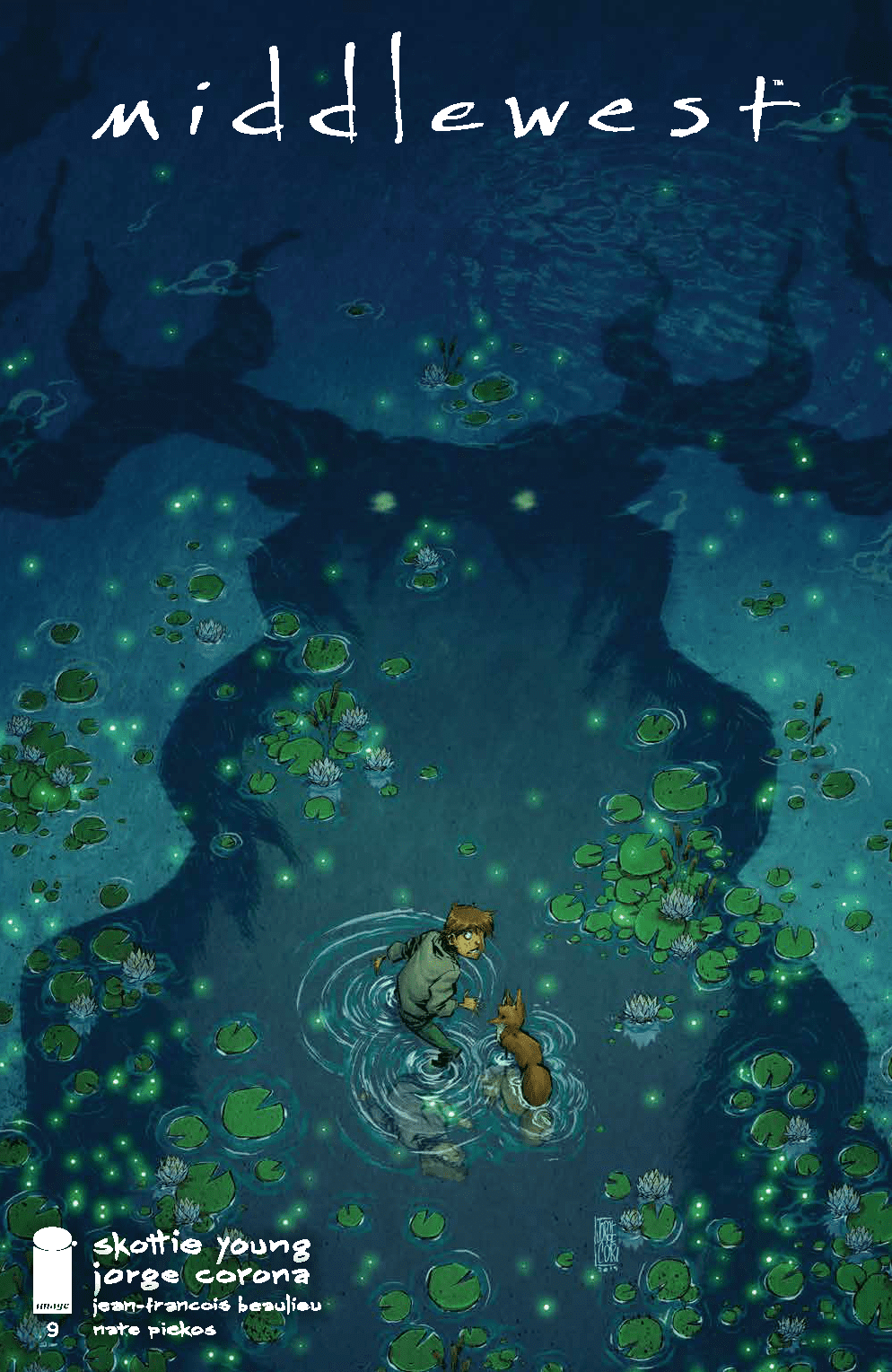 Run as he might, Abel’s past is catching up to him. He is astounded and relieved, however, when the woodland people he and Fox encounter seem to know his mark.

One of the many admirable traits of Middlewest is that it isn’t a fantasy quest to save the world. That stakes are much more grounded, and personal. Abel and Fox’s journey have similar attributes to, say, Frodo and Sam’s, but the evil they are trying to thwart is from within. In this most recent issue, we seemed to have gotten a pretty good idea of how Abel will be able to do just that, as well as what could happen to him if he lets his heart of a storm take over.

Writer Skottie Young continues to take us down his Yellow Brick Road, this time really doubling down on his familiar, yet wholly unique worldbuilding. In Middlewest #9, we get a glimpse of new faces, a religion thought long-gone, and its deity. Young cracks open the door to his world another inch to make our eyes bulge in curiosity, yet holds back just enough to keep us wanting more. And he paces the book in such a way that lets the readers soak it all in and be captivated by the world and story as it unfolds.

Of course, Middlewest wouldn’t be half as enthralling if it weren’t for Abel and the characters he encounters. Abel is a thoroughly flushed out character in Young’s tale, with relatable attributes such as having to deal with inner demons, as well as the ‘sins of the father’ trope. In this issue, Abel learns that anger isn’t always the best response, thanks in full to the help of his familiar. Yes, Fox is an interesting character, one who isn’t always 100% the kindest of companions, but is wholeheartedly loyal. This issue gave him some intriguing developments, such as a better understanding of why these talking animals exist. There is also clearly much more to learn about Abel, his family history, and the truth of his heart of a storm, given the exciting plot point in this issue’s final page. 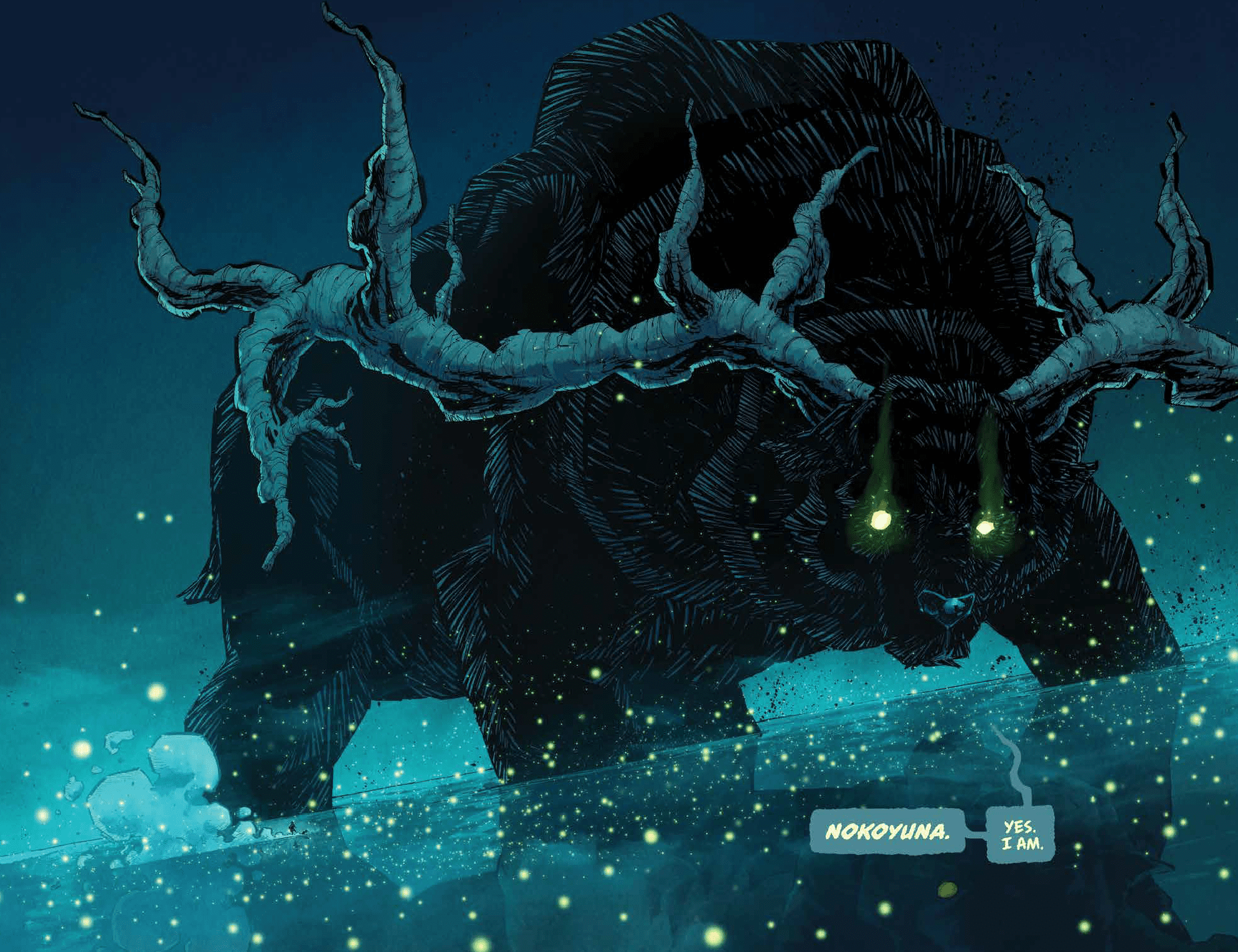 Jorge Corona’s work is simply stunning. Each and every panel is something to behold. His characters are animated and full of life. The overtly expressive eyes helps in conveying the emotions of the characters, and we as the reader cannot help but feel as well. But what’s even more impressive are the tiny details in the backgrounds of each panel. Corona adds layer after layer of elements in the scenery and architecture, that you find something new upon each look.

The Nowak village in this issue of Middlewest is a perfect display of Corona’s finesse and genius. It’s as if George Lucas commissioned Studio Ghibli to craft a new, refreshing take on Endor. Another impeccable example of Corona’s work is the double splash page featuring the Nokoyuna. It is nothing short of awe-inspiring, intimidating, beautiful, and terrifying all at once.

Middlewest #9 is fantastical storytelling and breathtaking artistry – capturing one’s complete attention as if by magic.

What did you think of Middlewest #9? Let us know in the comments!

Middlewest #9 is fantastical storytelling and breathtaking artistry - capturing one’s complete attention as if by magic.Review: MIDDLEWEST #9 and the Heart of a Storm