It’s a new era for the X-Men! And Marvel’s trade release game is on point. The same day the final crossover trade for IvX came out, three “ResurrXIon” trades were published. It’s pretty ingenious. There was no waiting to read more, so those excited by reading X-Men Prime in All-New X-Men Inevitable Vol 4: IvX could go right back to the Kindle or Comixology store and read more. The downside is that it looks like the next few trades to hit won’t come until October. How dare Marvel make us wait slightly more than a month to read more!

But the first three trades are here. And they’re all team books. Starting with:

X-Men Gold Vol 1: Back to Basics

After Inhumans Vs X-Men, the X-Men felt rudderless. They didn’t know where to go from their last crisis, and Storm didn’t even know if she wanted to remain an X-Man. Then came Kitty Pryde, and she put the team back on track. Now, in the new flagship title X-Men Gold, we get to see what kind of leader Kitty will be to the X-Men. In just one trade (and two stories), she’s already proving that she’ll be one of the best team leaders they’ve ever had.

Her time with the Guardians of the Galaxy seems to have had an impact on Kitty. She’s more decisive than she’s been in the past, and certainly a lot more confident than she’s ever been. She’s still young, and she still has some of the same quirks of her youth. But she isn’t the “quarter-life crisis” Kitty, we saw in Bendis’s All-New X-Men (which isn’t a slight, it can be a significant development), she isn’t the confused, kind of angsty young woman in Joss Whedon’s Astonishing X-Men (again, not a complaint. All character development). And of course, she’s no longer the scared teen from the Claremont era. She’s a strong woman, and it’s great to watch her lead.

Most of the development, rightfully, goes to Kitty. But Rachel Grey also gets a lot of development. It’s odd because the growth of the character is intentionally forced by Kitty. She makes Rachel take a new name and costume that isn’t tied to her past. She’s not trying to dress like her mom anymore. She’s Prestige now. And it’s about time she did. It looks like we’ll see a lot of changes in Prestige—her arc has just begun.

Storm, Colossus, Nightcrawler, and Old Man Logan make up the rest of the team, and Guggenheim smartly lets these four be anchors to their old selves. There is slight development to each, but focusing on Kitty and Rachel gave the trade a lot more cohesion.

Then there’s the art. We won’t get into the controversy that erupted from the 1st issues. It was unfortunate. Syaf is a real artist, and the first three issues looked fantastic, but what happened had to happen. We’ll leave it at that. R.B. Silva took up art duties, and he’s just as good. His nano-sentinel and superhero cameos in the second arc of the book were fantastic.

As the launch for the new era of X-Men, it’s strong. And as the title suggests, there is a Back to Basics idea going on here. They’re heroes again, but we also have a politician plotting against them. The team feels like a classic X-Men team, and they’re able to be heroes again instead of just surviving, which they had been doing since House of M 12 years ago. And they’re fighting sentinels again, which is always fun. 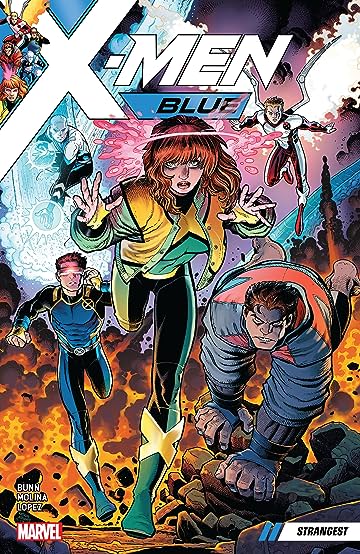 Since Beast pulled the original X-Men out of the past and into the present, the team’s been driven in different directions quite often. Beast’s original goal was for them to see how far Cyclops has strayed from Xavier’s dream But since then, they’ve been pulled in different directions and hardly spent time as a full team. Angel went with older Cyclops for a bit. Cyclops then went to space to hang out with his dad. Jean went with Storm to X-Haven. But now they’re all a team again, with Jean as the leader (as Hank says, finally!) and their mentor and benefactor? Magneto.

For readers, Magneto has been a hero a lot longer than he’s been a villain. He’s been on the X-Men’s side in one way or another for nearly the last 15 years or so, at least. So, it’s not a big surprise for us that he wants to find a new way to help mutants and honor his old friend. But Bunn makes something clear—the Original Five (Wait…no, let’s call them X-Men 5-O!) fought him like a week before Old Beast pulled them out of their timeline. For them, it’s still crazy that Magneto is fighting with the X-Men. And though Magneto allows Jean to read his mind, they’re still having a hell of a hard time believing it.

Bunn makes a few wise choices here. He focuses on classic villains. They fight one of the oldest and most famous villains in the first issue—Juggernaut. And Bunn better bring him back because he was the highlight of the book, but only in the first issue. He also needs to explain the Bane-like tubes on his costume. What was that? They also fight some sentinels, always a hit.

The one problem with the writing was that the villains just kept running away. Iceman even jokes about it, but it was kind of annoying.

Another aspect of the book that worked well, for the issues he was involved in, was Jorge Molina’s art. It’s not just that he did a good job making the X5-O look like teens, but he made them look youthful in their presentation, not just looks. The art had a young vibe to it, and it was needed for the characters. The other artists did an okay job getting Molina’s flavor, but it’d be good to see him return.

(Author note: I didn’t read all of Bendis’s X-Men run…now I am considering it. Look out for BINGE READING soon…ish) 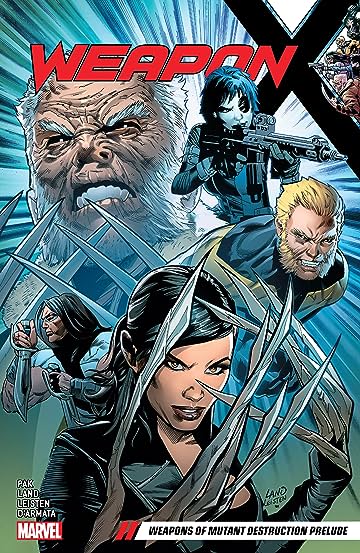 This is a very plot-driven book. It’s not that the character development is inadequate or nonexistent, it’s that the characters don’t have time to develop because they’re always being attacked by crazy Weapon X cyborgs. It’s intense. The cyborgs don’t just have the “we can look like anyone” trait; they can be almost anything. There are cyborg birds. Warpath is even attacked by Cyborg horses! Horses! Not even space is safe since that’s where they went after Hulk.

The book is fun, but Pak might have jumped into a crossover event a little too quickly. There was no time for the team to even form before jumping into Weapons of Mutant Destruction. In fact, it starts crossing over before the team comes together. Unless Hulk becomes part of the team, they needed an adventure before this one to build as a team. And since the next trade will be WMD, it might be a while before we see how the five deadliest mutants in the world operate as a team.

The other issue is Greg Land’s art. It’s become a cliché to complain about his art, but there are problems here. All of his women still have the same exact face. It’s annoying. His characters just don’t look impressive. Some of the cyborgs are cool looking, but still just boring. There were cyborg horses. They should have looked crazy and freaky. They just look kind of dull. Too bad they couldn’t get Clayton Crain or Esad Ribic on the book.

It’s an exciting time to be an X-Men fan. These three books were an awesome start for the new era of X-Men, and it feels like Marvel is taking their mutants a little more seriously again. And with the impressive new line up, there’s certainly no shortage of X-books anymore.