This is it.  Seven days to Christmas (or X number of days until the preferred Winter Holiday of your choosing).  Ten days left to impress those we love with our generosity and implicit knowledge of everything they love and desire.

Here’s the Chicago Comic Vault’s List of Something For Everyone, so long as “everyone” means “people who would enjoy receiving comics as presents” which really should be “everyone” but we live in an unjust world.

This is the book with something for everyone.  Collecting all of Bill Willingham’s non-Fables DC stories, Bad Ideas and Big Doings is a delicious blend of madcap humor, high stakes poker games, and crafty witches-for-hire.  Plus, the book itself is printed beautifully with over 500 pages full of story and none of the filler.

Get it for: the Fables fanatic who needs something to read between trades, the Sandman fan wanting to see some familiar faces, or a short-story lover who can appreciate prose and pretty pictures.

Gateway Book to: Fables, Sandman, Vertigo, independent books.  This book has the ability to hook new comics fans, bring back old ones, and delight long-time fans.  It might also be able to cure cancer and tap dance better than Ginger Rogers.

This collection of Greg Rucka’s pitch-perfect small town noir miniseries set in Oregon’s Hipster Mecca is definitely one of the jewels in Oni Press’ ever-expanding crown.  Weird metaphors aside, Stumptown is an amazing book with a hardcover that take a pretty considerable beating and printed out on paper with just the right amount of weight.  Rucka paints the perfect picture of Portland, following private investigator Dex as she attempts to clear her considerable gambling debts by tracking the grand-daughter of the head of the Wind Coast casino.  In true noir fashion, things of course go terribly awry and no one is who they seem to be.

Get it for: the indie book lover wanting to start comics without touching Big Two Continuity, or for the Big Two Lover looking for a nice pallet cleanser between Bat-books and the latest Avengers title.

Gateway Book to: other noir-comics like Brubaker’s Incognito or interesting female-led titles like Bendis’ Scarlet, not to mention it’s the perfect primer for Rucka’s “Queen and Country” collection.

Bryan Q. Miller’s fantastic run on Batgirl is easily one of the brighter moments for the past two years of DC story-telling.  Stephanie Brown’s stories as Batgirl were fun and essentially free of heavy continuity, two things that are legitimately hard to find when the Bat-verse itself is usually occupied with its own backstory set in its usual GRIMDARK tone.  Steph countered big baddies like the Scarecrow with a utility belt full of inventive Batarangs and a positive attitude.  Plus, the series served as an excellent hurrah to Barbara Gordon’s time as Oracle, who served as Steph’s mentor, who imparted bits of crime-fighting wisdom with snark and waffles.

Get it for: the lady who would love comics if not for all the sexualized imagery, or for the Big Two fan who needs something fun and light to read over the holidays.

Gateway Book to: any other Batgirl title, and with three having shared the title, there’s plenty to choose from!  Plus, with Batgirl being a flagship title, and with both Stephanie and Cassandra Cain appearing in Grant Morrison’s Batman, Leviathan, fans will have plenty of new material to look forward to as well.

Obscure historical figures have never been so hilarious.  Or rather, they were never very hilarious and somehow Kate Beaton has managed to tell their stories in the most brilliant way possible.  Read about the exploits of Nancy Drew and Napoleon, and have a laugh at the expense of Nikola Tesla, Jane Austen, and Lord Byron. 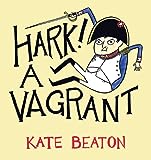 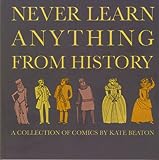 Get it for: the history geek who can laugh at themselves, the Austen addict, science nerds, and anyone who can appreciate a light style and sharp humor.

Morning Glories is easily the breakout indie hit of the last year, with its measure of equal parts LOST and everything terrible you remember about high school.  Nick Spencer and Joe Eisma have worked together to create a book that captures the essence of high school without being too Gossip Girl and projects a sense of mystery and danger without being too melodramatic.  While a printing error means the Deluxe Edition might not be able for Christmas, it’s worth reserving a copy for at your local LCS, or if you need to get your Glories fix right away, two trades are available from Image collecting the first twelve issues of the critically acclaimed series.

Get it for: the hopeless and helpless fans of everything from LOST to Gossip Girl, the indie book fan, the conspiracy fanatic, and the all around comic fan.

Gateway Book to: the full range of Image titles.

Sometimes a book, no matter how good it might be, can’t quite float the numbers and gets the axe.  Such was the case for Thor: TMA, which featured fun stories from Robert Langrige and clean, engaging art from Chris Samnee.  Thor and his hammer fought their way through giant robots, crazy sea monsters, and even had a little time for romance in this series that made it to eight fantastic issues.

Get it for: the young comic fans, this book was perfect for first-time comic readers of all ages.

Gateway Book to: the rest of the Thor series, particularly J. Michael Straczynski’s run as well as some classics like Avengers: Disassembled and some of the more recent Avengers titles.

If you haven’t read Scott Snyder’s amazing Detective Comics run, then you need to seriously reconsider your life choices.  Or, you can buy the first trade collecting Detective Comics #871-881 with stunning art by Jock and Francesco Francavilla.  Easily some of the best Batman stories of the decade, the Black Mirror trade follows Dick Grayson through his tenure as Batman, as Dick uncovers the deadly House or Mirrors and takes on the darkest side of organized crime that Gotham’s ever seen, all while trying to reconcile his identity as Batman and his place in Gotham City.

Get it for:  Anyone who’s ever muttered a word about liking Batman in their entire lives.

Speaking of greatest Batman stories, Greg Rucka and J.H. Williams III just happened to write the single best non-Batman Batman story in recent history.  Kate Kane, tattooed, Jewish, and proud lesbian, took on the Bat-mantle after being don’t-ask-don’t-tell’ed out of West Point.  As Batwoman, Kate takes on a new set of Gotham’s criminal elite, this time being controlled by a porcelain-white Carrolian goth girl. Also, have I mentioned how incredible Williams’ art and layouts are?  Because they’re amazing.

Get it for: the fanboy who has his Bat-blinders on, the girl who owns more Batman t-shirts than comics, the queer comic fan looking for some badass representation in mainstream comics, and any lady comic fan who hasn’t discovered the wonder that is Kate Kane.

This book is very cool.  Matt Fraction writes a spy thriller that appeals to fans across genres because well, this book just refuses to hang out in a single one.  Casanova Quinn does pretty much everything to get out of doing anything after his super-spy brother is killed in action working under his father’s E.M.P.I.R.E organization.  So in order to avoid responsibility and a mess of gambling debt, Casanova jumps out of a floating casino and ends up in an alternate timeline.  The series is non-stop, zany action with Buddhist staring contests, fights inside giant robot heads, and all the things that make the spy genre so fun (gadgets and fierce ladies).

Get it for: the James Bond fan, the consipiracist, or the sci-fi fan.

Easily my favorite ongoing series right now, The Unwritten comes from Mike Carey and Peter Gross and there just really aren’t enough nice things I can say about this book.  Coming from a strong literary background (hello, English major!), The Unwritten combs through an impressive canon of Western literature (albeit a very white, male canon) and revolves around the life of Tom Taylor, the symbolic face of a wildly popular series of children’s books.  Think if Harry Potter were a washed up child star with a dad who had gone missing, presumed dead.  Tom’s life gets turned upside down though when secrets about his family start coming out of the woodwork, and famous literary characters start coming out of their stories.

Get it for: the book-lover who hasn’t sampled comics yet, the all-around lit geek, and the grown-up Harry Potter fan looking for a character they can relate to.

Gateway Book to:  Harry Potter, other literary indie titles like Fables or Sandman.

Naturally, everybody here at Comic Vault recommends you visit your Local Comic Store to find any of these things for your loved ones this Christmas.  However, if you happen to desire the Amazon hook-up, most of the books featured in this list are at half off their sale price, and there’s just enough time to order for Christmas.  Plus, think how much ramen noodles all those saved dollars will buy.

So from everybody here at Chicago Comic Vault,