Lands Of Toons #1-3: The Existential Crisis Of Ratings

Lands of Toons is the indie comic project of creator Kevin Chilcoat. Joining Chilcoat are artists Hayley Russell and Andrew Morriss, who share all art duties. The Kickstarter for the third issue (ending November 7) is currently the only known way to get these comics.

Animate Has A New Meaning

From the words of the creator:

This story was initially written by me (Kevin Chilcoat) as a screenplay, as it was and is intended to be a movie. The screenplay is complete and has been for a year at this point. Unfortunately for me, getting an animated movie made is something I don’t have experience in, and I don’t have any resources to help me with that goal. So I’ve decided to take a chance to do what I can to bring this story to life and adapted it into comic book format. I’m also working with Hayley Russell and Andrew Morrice of HRAM Comics, who have illustrated, inked, lettered, and colored this book.

Lands of Toons is a story created by a fan of animation and is for fans of animation. From Walt Disney to Chuck Jones to Don Bluth, Lands of Toons pays homage to the types of stories, themes, and characters that each of these entities brought to life. To stay true to the evolution of animation, the first issue is almost entirely in black and white, where the second and third issues are in full color.

Lands of Toons: The Grind of Popularity

Lands of Toons details the development and life of cartoon characters with self-awareness. Much like the screenplay itself, Chilcoat has them come into existence as they enter all of the motions. Magnus The Monkey and Zookeeper Ted quickly fit into their preordained roles for skits. It’s like the toons are actors purely out of necessity with a system based on ratings keeping them alive. Nobody really understands it; everybody does what they’ve been given. That sounds dangerously like living your mundane life and taking some form of entitlement out of it. Some people like Magnus and Ted get lucky with their high ratings, but the less popular and notable get left behind.

Imagine that scenario with every cartoonist’s hopes and dreams. Whether it’s the funny papers or TV, artists struggle to make something work while competing against others looking for a chance to shine. Even then, it’s mostly telling the same jokes over and over again until something new comes along. Even longtime favorites like Garfield go down this path. So what happens when toons start disappearing when their ratings drop? Well, if you’re on top like Magnus at first, you keep doing the grind. Because if you’ve got something good, why change anything?

Out Of The Box Improv 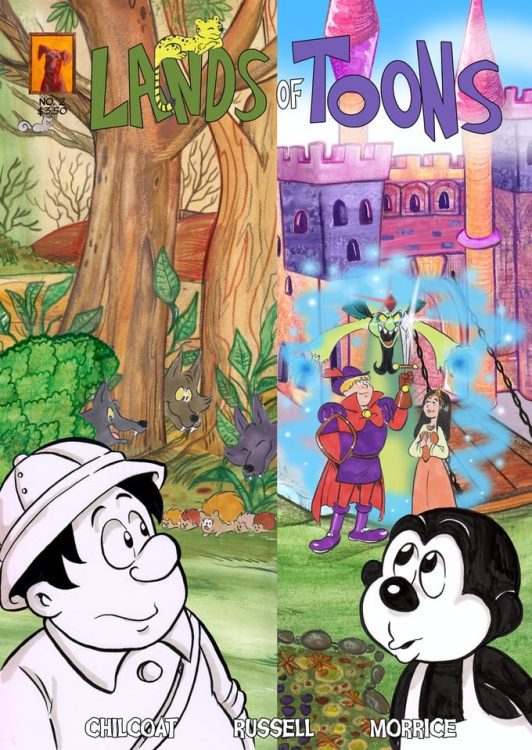 But what about the people who are less fortunate than you in these situations? The other toons can’t help that their scripted episodes don’t appeal as much. But ignoring others’ problems like they won’t be yours is just denying the reality of the situation. Just because one team of toons won’t disappear as fast doesn’t mean that they won’t. It’s that kind of entitlement that leads to complacency. Had it not been for Ted motivating Magnus into going into the other Lands, Magnus would have lived in denial.

Between all of the hijinks and new experiences, there are some genuine moments of living outside the Lands of Toons’ boundaries. During an act in one of the lands that evoke the tragedies from movies like Bambi. Magnus and Ted’s actions in rejection of the script actually make that scene a higher rating. Unfortunately, despite having a minor victory, what happens after this act gives way to another tragedy in issue 2. Without spoiling anything, it’s a genuine loss because of Magnus and Ted’s choices and ultimately sticking to it. The quest to save their remaining friends even forces Magnus to reflect on his earlier entitlement in Issue 3. What better foil than a spoiled prince who gleams toxic masculinity?

Lands of Toons In Colors

The two artists Hayley Russell and Andrew Morrice, take on all creative rolls in Lands of Toons. Between the two of them, each issue’s change in artwork tells a piece of the story. The monochromatic rubber hose designs of the early toons perfectly encapsulate the simpler times Magnus and Ted live in. Everyone sticks to the script, and everything seems fine with all of the slapstick gags like flattening on a brick wall. But the lack of sophisticated insight is what holds them back.

The more colorful lands certainly try to add more sophisticated designs. The backgrounds are meant to evoke the highly detailed stills from Disney animation’s likes from 1937’s Snow White and the Seven Dwarves and onwards. In contrast, characters with simpler designs are built to be more expressive. If Magnus and Ted ever got color redesigns, they would fit nicely in the land. Princess Myra certainly covers that aspect in her travels to the different colored lands. It’s the kind of warmth people watching family films would like to reminisce and enjoy with others. Which just so happens to be what Chilcoat is hoping for.

The Language of Comics 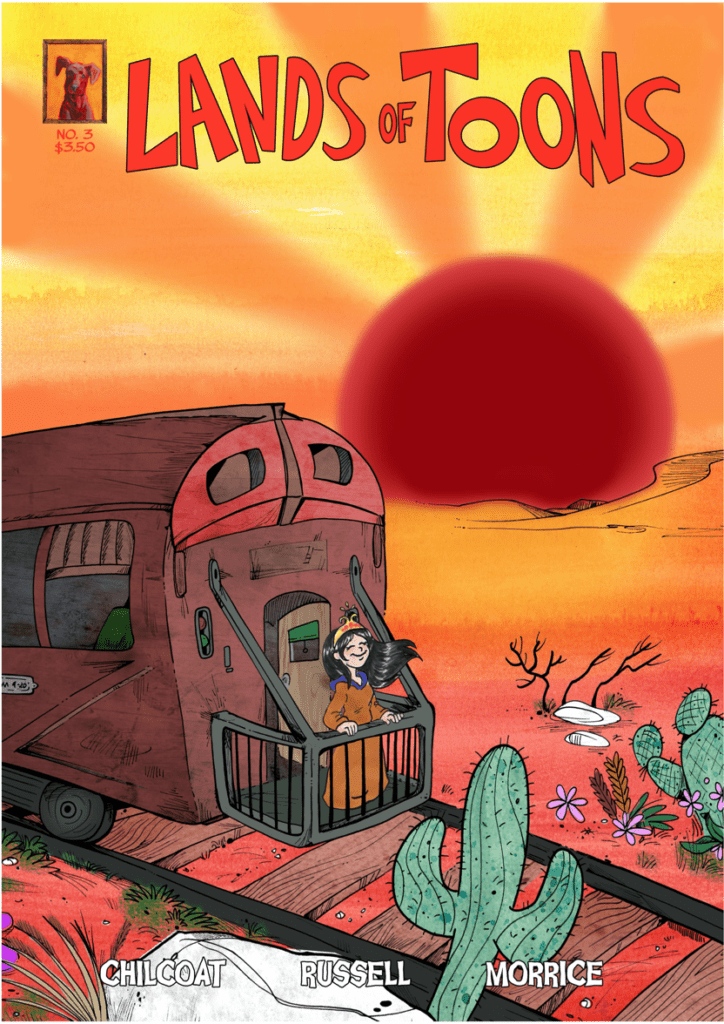 All of the above can easily be done if Lands of Toons was animated. Russell and Morrice, however, ensure that this is still a comic through both panel layout and lettering. For example, a page of issue 3 features a classic 9-panel grid where Magnus is panicking from trying to take back control of the situation. A couple of word balloons going out of the next-to-last panel from Magnus and Myra reveal that this is an overreaction on Magnus’ part. The last panel effectively reacts by straightening out this inner turmoil by the last panel focusing on Magnus, and his word balloon stays in bounds.

Lands of Toons is Fun For The Whole Family

Lands of Toons effectively captures the essence of classic animation by displaying what makes them memorable. It’s not the fame or high ratings that keep them going; it’s the memories made. Spending these moments with others can help one person find the shortcomings of others. Breaking away from the formulaic grind is just the first step to creating a self-aware identity. Otherwise, they’re stuck in a grind until everything dries up. All of this in a screenplay made into a comic that isn’t even done with its first act.

Lands of Toons has all of the makings of a memorable animated movie. As the artwork changes style, the self-awareness, the stakes the characters face, the commentary about the eras, and still taking the opportunity to be a comic book rather than just storyboards waiting to be animated.Lands Of Toons #1-3: The Existential Crisis Of Ratings