Review: THE MANY DEATHS OF LAILA STARR #1 is a Trope-Busting Wonder of Storytelling

The Many Deaths of Laila Starr No. 1 is the first in a five-issue miniseries from Boom! Studios, written by Ram V and drawn by Filipe Andrade, that provides a trope-busting look at reincarnation, thanks to the goddess of death. With a vibe that calls back to one of my favorite novels, Good Omens by Neil Gaiman and Terry Pratchett, Laila Starr combines dry wit and the absurd with a touch of humanity and the fantastic.

On the busy streets of Mumbai at rush hour, the story begins with a woman in labor, along with her harried husband, being rushed to the hospital with all the unintentional real-life hilarity accompanying such events. While the expectant parents are weaving through the traffic of India’s largest city, our titular Ms. Starr is at a party, filled with the kind of people Laila clearly finds uninteresting. 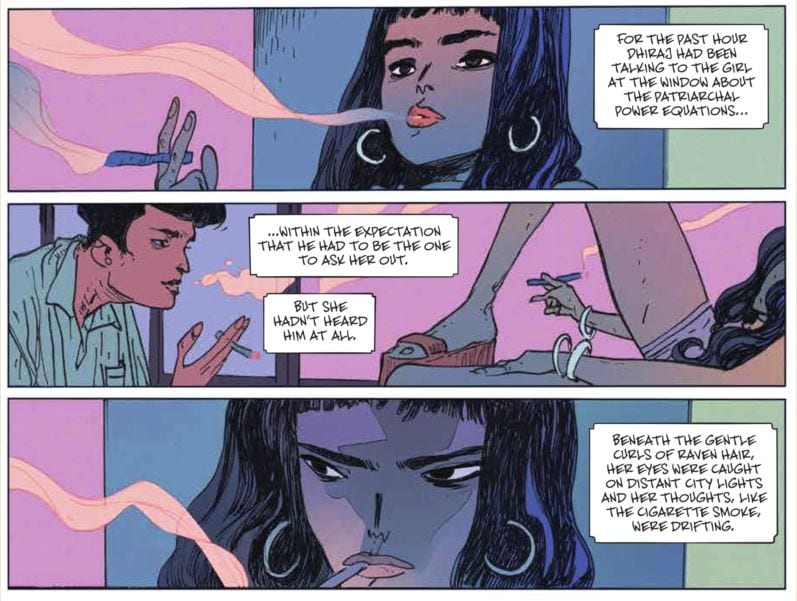 As all this is happening upon the mortal plane, the corporate office for what appears to be the Hindu pantheon of gods is bustling. The Goddess of Death, Kali (not named, but the blue skins, six arms, and job description seems to confirm her identity), is rushing to the office of the three-faced “purveyor of all goodness” who can be assumed to be Brahma the Creator. Brahma is the nervous bearer of bad news, as it’s revealed the child rushing to be born in a Mumbai cab eventually discovers the key to immortality, removing death as a threat to mortals.

And also removing Death from a job.

After some dealings and machinations, she manages to place herself directly into the lives of the infant and Laila. After a twist both hilarious and disturbing, Death is forced to rework her plans. The goal is to get her job back. How she intends to do it, though; that’s the rub. 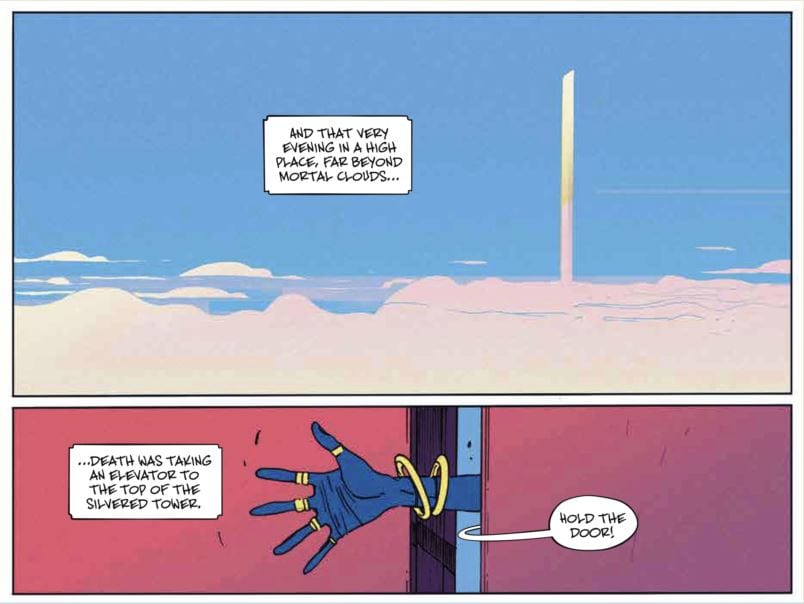 (Just an example of how even the dream jobs have negatives.)

Ram V’s story is quirky in that way real life feels quirky sometimes. There are areas where he could have fallen within an awaiting trope, be it reincarnation, the meddling of gods in the affairs of humans, trying to change the future, etc. Ram expertly moved past them all by avoiding the well-known and well-used Greek and Norse gods and instead, focusing on Hindu mythology. The principals of the pantheon are treated with respect, while providing them with 21st century anxiety and neurosis.

The characters feel real. We understand Laila’s ennui at the party, we understand Death’s shock at being fired at the job she was literally created to do. The greatest villains are the ones who create conflict within us. Thanos, for his seemingly murderous plans, believed he was on the righteous path. Darth Vader, twisted and evil, became that way because of his very-human flaws. Death’s hesitation at a crucial moment creates a moment of humanity, one that follows her throughout the series, creating conflict for the reader. Does Death overcome her need for revenge? How does the baby fit into her plans? These and more questions, all born from that moment of doubt.

Andrade’s art is perfect for this story. This isn’t a series needing the hyper-realism of Jim Lee and the like. So many of the emotions exhibited by the story’s characters are abstract and are reflected by the art. The overblown pain and mystery of childbirth is etched on the faces of the soon-to-be parents. How do you properly convey panic from a god forced to give the walking papers to another, very angry god? Andrade captures it with both humor and a pen capable of adding the little touches that make the scene believable.

The book’s colors, featuring assistance from Ines Amaro, blast off the page. A seeming car crash of dark shades, pastels, and heavy inks, it works splendidly within the story, the atmosphere tinted by the feelings emoted by Ram’s chracters. Deron Bennett of AndWorld Designs provided the words and his jaunty slash marks fit the story, adding to the mixture of the surreal, the paranormal, and the day-to-day. A great letterer does their job without distracting, but a great letterer also knows when it’s time to add flair and a little panache. This is one of those times and it helped tell the story beautifully.

The Many Deaths of Laila Starr was sold out before it shipped and is already being reprinted, for good reason. This book feels like one of those special gifts, the kind of comic sitting outside the norms of the genre while reminding us why we love comics in the first place.

The Many Deaths of Laila Starr No. 1 is the first in a five-issue miniseries from Boom! Studios, written by Ram V and drawn by Filipe Andrade, that provides a trope-busting look at reincarnation, thanks to the goddess of death. With a vibe that...Review: THE MANY DEATHS OF LAILA STARR #1 is a Trope-Busting Wonder of Storytelling