Teased back in December of last year, JUSTICE LEAGUE #19 is the first part in Snyder and Jiménez’s storyline The Sixth Dimension, where the League is pit against older versions of themselves, courtesy of Mxyzptlk. 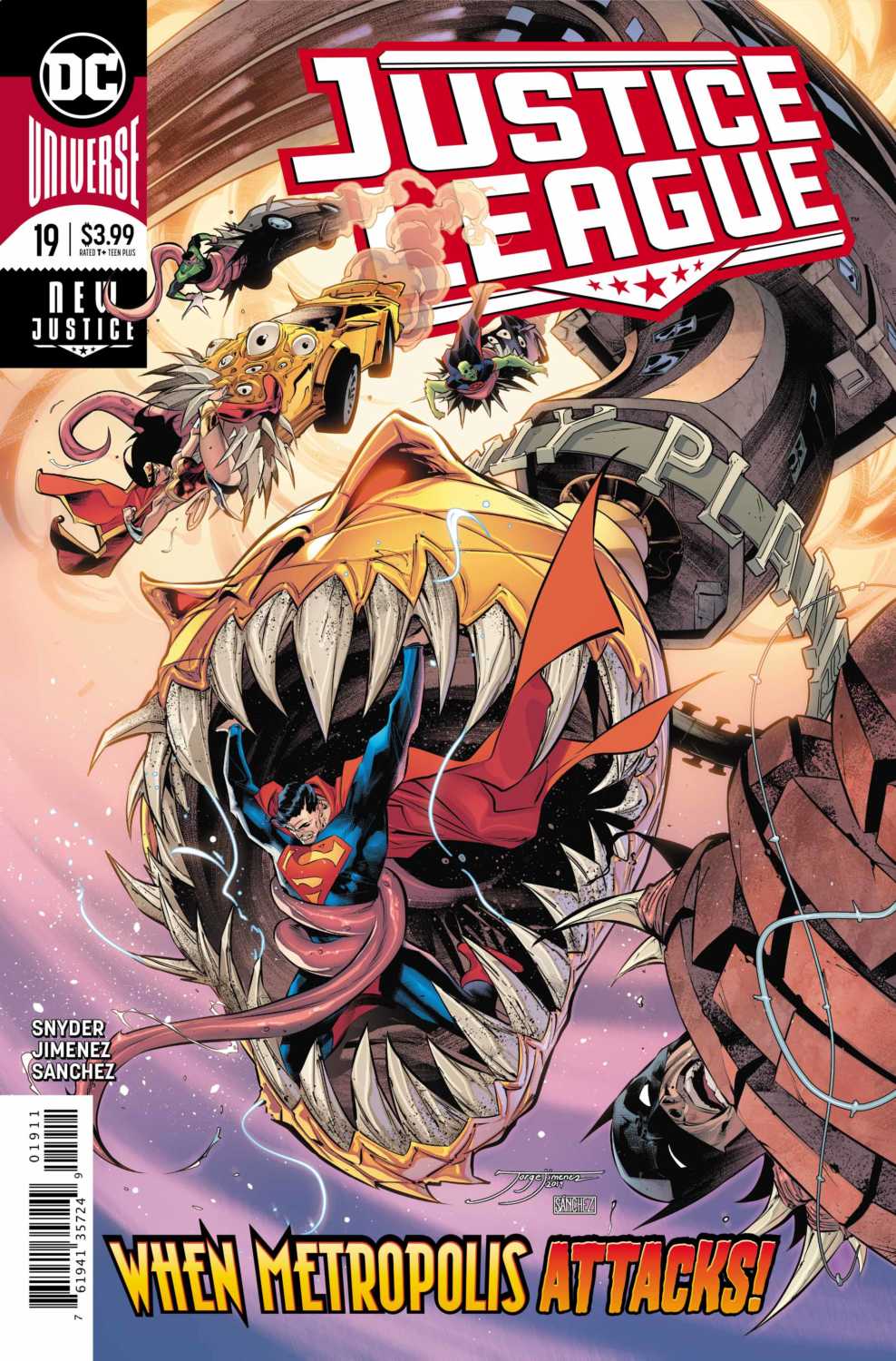 This first issue of the event is, to me, a much needed respite from the overarching (and sometimes overwhelming) story involving The Source Wall. Huge revelations were made, and the team is now one step closer on their journey to saving everything. But before the Justice League can make their way to this sixth dimension, they must first deal with an utterly unhinged Mr. Mxyzptlk.

“The Sixth Dimension” part one! At last, the Justice League has the map to the Sixth Dimension in hand—and with it, they have the key to saving the Multiverse from utter destruction! But things aren’t as simple as they seem, because they still need to get to the doorway—and to do that, they’ll have to go through the only being in all of existence who can get them there: Mr. Mxyzptlk!

After doling out justice at various places in the cosmos, as well as uncovering more of the mystery of The Source Wall, the core members of the league (now with more Starman) are finally back together. They now have a plan to prevent Lex Luthor from awaking Perpetua, and bringing about the end of the Multiverse.

In JUSTICE LEAGUE #19, Scott Snyder once again delivers on his quest to completely change the DC Universe. He does so by utilizing Mr. Mxyzptlk in a way that has rarely been seen before. This is a Mxy who, if given the chance, could take down every single member of the Justice League in a manner of minutes. The way that Snyder chose to write this, a sequence in which Mxyzptlk brings familiar buildings to monstrous life while manipulating the reality of some of the League members, is both entertaining and horrifying.

The dialogue is worth noting, too. I couldn’t help but smile at Superman’s moments with his signature messages of hope. Where Snyder excels is in his exposition, particularly when Mxyzptlk reveals information about his fifth dimension, as well as the newly unveiled sixth. 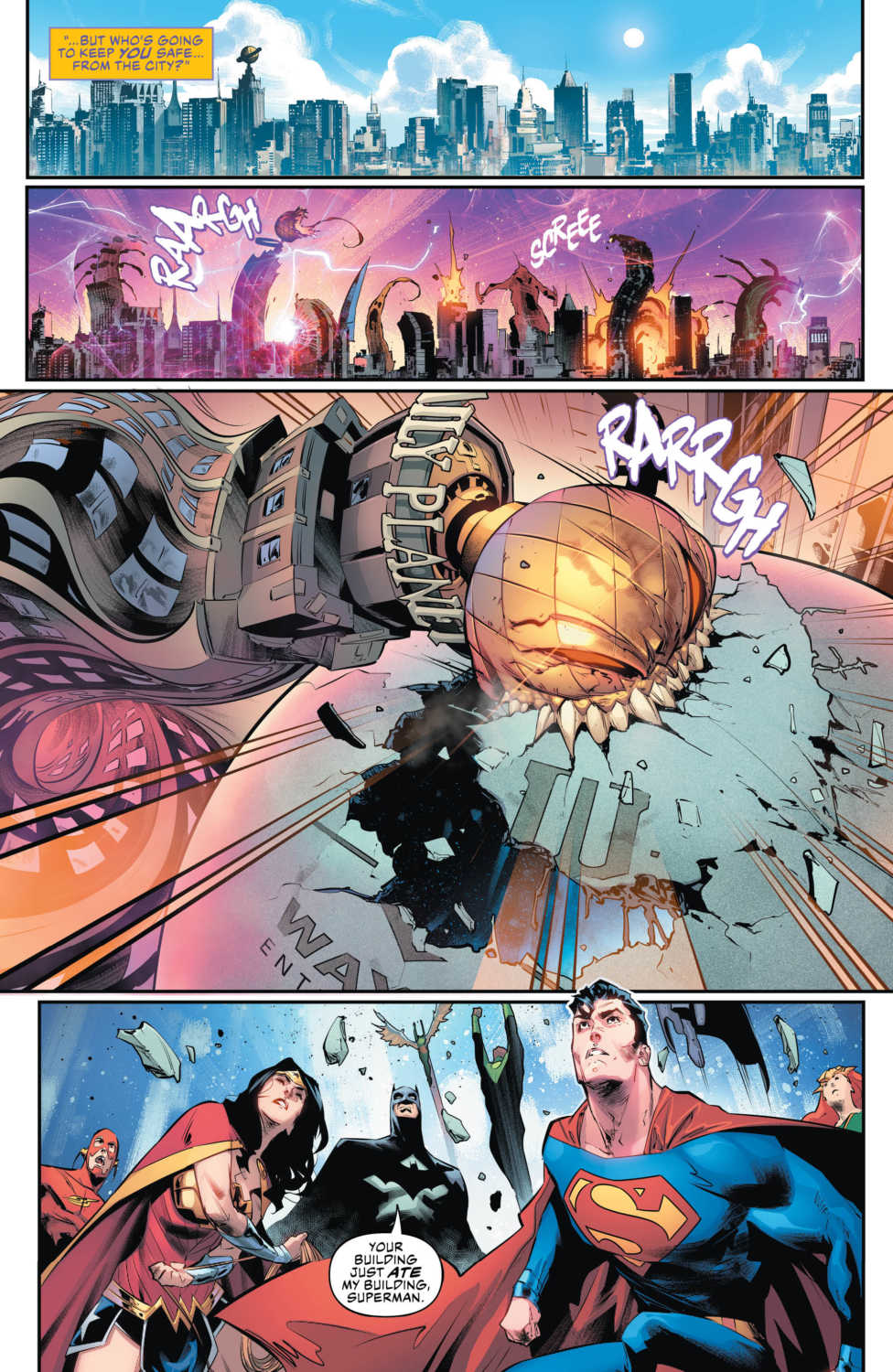 Jorge Jiménez creates some wonderful visuals in this issue. From something like the angle and curvature of Metropolis as Superman flies through it, to a beautiful spread containing imagery of the League, the Multiverse, and the Sixth Dimension, Jimenez masterfully lays out panels that are unique and intricate.

It all comes together with the colors of Alejandro Sanchez, particularly in the background of the panels. Standouts include the pinks and purples of inter-dimensional space, the whites and beige of the Hall of Justice, and the glowing and glittering look of the new, elder Superman.

Snyder and co continue to make JUSTICE LEAGUE a great book to read, with a high concept story, sincere heroes, terrifying villains, intriguing revelations, and captivating artwork. If you’re a fan of this run of JUSTICE LEAGUE, this issue will not disappoint. Conversely, it will get you excited with what’s to come, both as an introduction to the “The Sixth Dimension” event, as well as a continuation of the overarching Source Wall story.

What did you think of Mister Mxyzptlk in JUSTICE LEAGUE #19? Let us know in the comments!

[Review] JUSTICE LEAGUE #19 Enters the Sixth Dimension with Mr. MxyzptlkThanks to top notch storytelling from Scott Snyder and artistry by Jorge Jiménez, JUSTICE LEAGUE #19 continues to prove its worth as one of the top current DC titles to read.