Jason Aaron can do it all. Aside from writing grand, galactic stories for Marvel like Star Wars and Thor, Aaron also has his own best-selling, creator-owned work like Southern Bastards. Monkeys Fighting Robots had the chance to speak with Aaron at MegaCon this past weekend, and asked him about that range, about what makes a good Thor story, and about how he handles nerd outrage online.

“The idea of this magic hammer and this enchantment and that it can transform you into something else was literally the first thing that Stan and Jack did with that character, so that part has always been intrinsic in who Thor is,” Aaron stated. “That inscription on the hammer, that promise of transformation has always been a part of Thor’s mythology … so the idea of Jane Foster being someone who is struggling with cancer and at the same time is worthy to pick up the hammer and fly around the cosmos as Thor saving the day, that to me is a Thor story. That is not changing anything that has come before it. Just because it’s a different person holding the hammer doesn’t change the nature of what the story is. To me, it’s the most Thor story of all the Thor stories I’ve done so far.”

On If He Worries About Nerd Rage:

On Writing Different Kinds Of Stories:

“I don’t do things any differently. It’s different in terms of, with Thor, I get to stand on the shoulders of giants and that I’ve got this toy box full of stuff to play with that people have been building for decades … with Southern Bastards, if I didn’t make it up, it doesn’t exist yet. Everything’s gotta come out of your own head. So it’s different challenges, but it’s not a different sort of job, really, going from one to the other.”

“I read a lot of different stuff, me as a fan, as a reader. I like independent stuff, I like superhero stuff, so I read a diverse mix of stuff. So I always love it when somebody comes up to my table and they’ve got like Scalped and Thor, or Southern Bastards and Wolverine and the X-Men, books that are very, very different. Cause I like doing books that don’t have the same voice, the same tone, that are very, very different … But if you only like one of those, if you don’t like the rest, that’s cool too. Like, read the stuff that makes you happy. If you don’t like superhero stuff, then I do other stuff. My wife doesn’t read my superhero stuff … so even in my own home I have somebody who isn’t reading all of my stuff.”

Aaron had a lot more to say, so be sure to watch the full video above. And keep it tuned to Monkeys Fighting Robots for more MegaCon interviews from this past weekend! 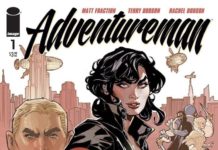 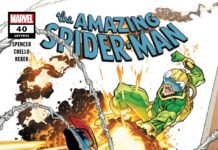 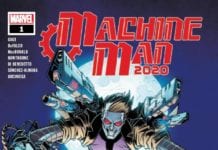