The 90’s were a weird time for mainstream comics. In the wake of the darker, more mature stories of the late 1980’s, Marvel and DC scrambled to continue chasing the critical and financial highs of this new era in the industry. The notion of looking back to the Silver and Golden age to continue forward seemed ludicrous at the time. This is just what James Robinson strove to do with the debut of his and artist Tony Harris’s Starman at DC comics in 1994. Also Featuring the artistic talents of Wade Von Grawbadger, Peter Snejbjerg, and others, Starman would tell the tale of reluctant hero Jack Knight taking up his father’s mantle as the Golden Age cosmic crime-fighter of Opal City. Robinson & Co.’s series would go on to be a surprise hit, running for 80 issues and standing tall to this day as one of the greatest comics to come out of DC. Starman’s consistency over such a long run stems not only from Robinson’s tight, clever scripting and the visual team’s unique stylistic approach, but from how thematically rich the comic run is from beginning to end. Above all else, Starman is a story about legacy; whether that be about family names, reputation, or simply what one wants to leave behind.

Starman’s story begins with tragedy. We first meet the new Starman, David Knight, just after taking up the mantle from his father, Ted Knight. Eager to continue the legacy of his Golden Age hero dad, he ascends with the Cosmic Rod of old – only to be shot out of the sky. Davey’s sudden death spurs the younger Knight son, the rebellious Jack, into action. Up until this point, Jack’s treatment of the Starman title ranged from disdain to indifference. The tattoo-clad collector of historic junk held little regard for his father’s super heroics – the very attitude that led to Davey wielding the cosmic rod instead. This guilt leads to Jack’s reluctant assuming of the title after his brother’s murder, albeit with some caveats. Gone is the Golden and Silver Age red and green skin-tight costume, replaced by Jack’s leather jacket and goggles. Guided by his father and the many allies he gains along his path – including the mysterious anti-hero and fan-favorite character The Shade – Jack Knight grows from hesitant avenger to cosmic explorer and even to family man across his 80-issue journey. 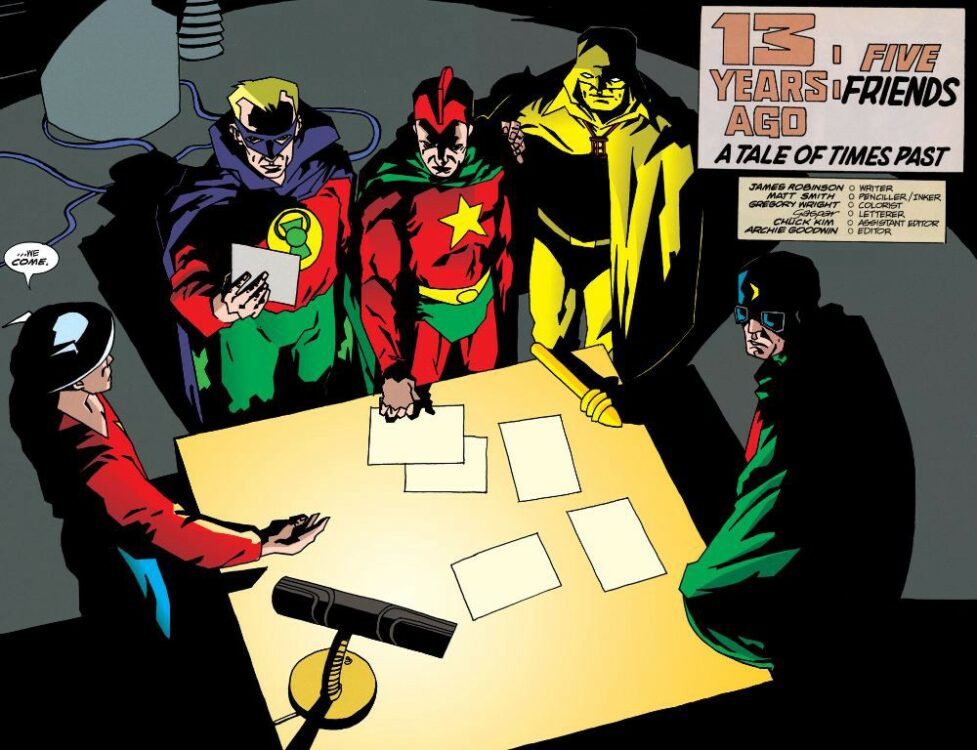 Over the course of this run, Knight & Co. cross paths with numerous heroes of the distant Golden Age past. Alan Scott as Green Lantern, Jay Garrick as The Flash, Wesley Dodds as a now retired Sandman, and others have their own roles in the story, helping indirectly guide Jack down his path as the new Starman. Robinson sets Jack apart as a different kind of character as a whole for the mid-90’s, with his reverence for what came before him. Not necessarily in a superhero sense (though he is a huge fan of Dodds detective work as Sandman), but in a cultural sense. Jack is a historic pop culture fiend, with interests ranging from the Golden Age of Hollywood to 19th century poems. The concept of maintaining a legacy is imprinted in Jack’s personality, even as we learn more about how little he once cared for the Starman title. As he grows as a hero, he becomes a positive influence on the people around him, reminding them to reflect on their own pasts – and how they want to be remembered. He befriends others who have fought under the Starman banner – Mikaal, an alien warrior turned refugee, and Will Payton a.k.a. Prince Gavyn, ruler of a galactic empire – and indirectly helps them find their way back onto their own paths after personal crisis’s.

Aside from Jack’s own arc, the most satisfying character development in the run is that of the mysterious immortal gentleman, The Shade. The 19th century family man turned-demonic spirit controller turned anti-hero mercenary is a fan-favorite of the series. His undeniable charm and unpredictable nature make him a joy to read, but his real complexity comes from witnessing his internal struggle with doing what is right. Shade’s juggling of his renegade tendencies and his growing sense of accountability is one of the most engaging plot points of the run. His development is due in no small part to his tenuous friendship with the Starman family. 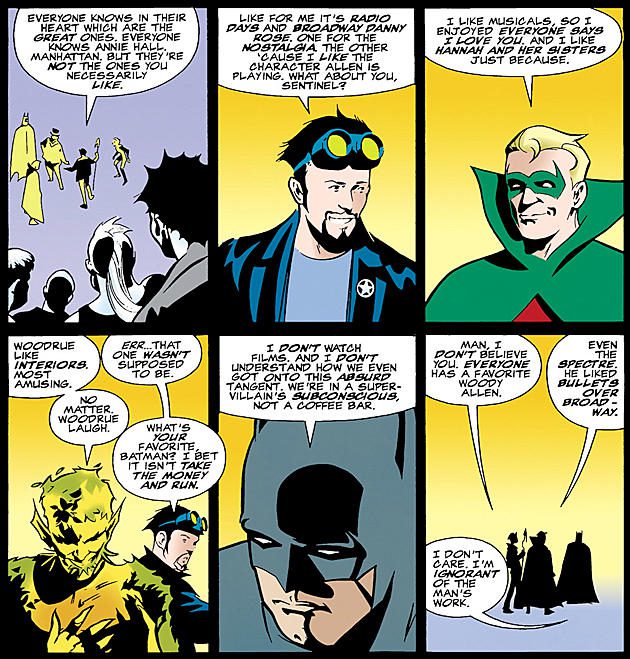 As much as Starman is a book about the past, it’s utilized as a way to approach the future of superhero comics. Robinson manages to keep Starman a largely insular comic. There are almost no crossovers, and which ones there are still manage to uphold the theme of the main story (a crossover with The Power of Shazam is a prime example). Starman’s conception almost feels like an intentionally pointed contradiction of what was happening with mainstream comics at the time. Muscle and utility pouch-clad anti-heroes sweeping through Crisis On Infinite Earths-esque crossover events littered comic stands for much of the decade, desperately seeking to capitalize on the works of the 1980’s. Starman remains so effective and consistent because it resigns to only being itself. Through all of Jack Knight’s trials, deeds, and flirtations, he learns and develops both as a hero and just as a person. Jack gains something from every interaction he has in this comic – from his conversations with his father, his brother, The Shade, numerous other classic heroes, even the villains he encounters. He fills the role of Starman admirably, but he never feels like a superhero. He often stumbles into success after taking hints from his father and the allies he comes across. 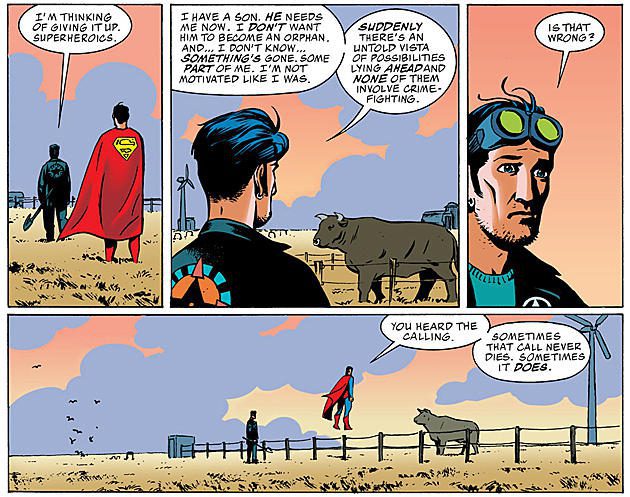 Starman is a story of learning lessons from those around you and turning that into a legacy. Everyone here is teaching each other something and these lessons – whether directly or indirectly – fuel their individual developments as the series progresses. Jack Knight himself develops and self-actualizes as a superhero, but ends his time in this series with the realization that he doesn’t want that anymore. With his new love and family to think about, Jack meets with all the allies he’s made in Opal to ensure the city is protected, hands off the Starman name to a proper newcomer, and leaves to live his new, calmer life. He isn’t running away from his title, but rather realizing what he needs to do for himself and his family while ensuring the legacy of his father remains intact. David paid the price for trying to be their father – a fate Ted never wanted for either of his sons. Jack’s decision at the end of the run is placed around his new obligations of fatherhood. When I say that Starman’s main thematic component is legacy, that doesn’t necessarily mean just that of super heroics. The legacy and lessons of prior generations given to the current – like father passing to son – are equally as relevant and baked into this comic’s story. James Robinson & Co.’s Starman is an immensely creative and entertaining series for many reasons, but the use of its thematic throughline makes it one of the greatest and most memorable mainstream comics ever released.