Robert Lundgren is a composer with several films (Trappan, En sjel for mye) under his belt but an ever-growing list of credits that include video games like the new Mutant Year Zero: Road To Eden which features a lot of strategies, story, and mutated animals with guns.

Robert’s tracks for Mutant Year Zero features a blend of styles plucking inspiration from all over the place. The reason for this is the post-apocalyptic, surreal setting of the video game has created a crazy, mixed up world. Also, Robert is a musician who loves a diverse range of sonic stylings.

Using the magic spell known as telephone-icus, Robert talked to PopAxiom about Mutant Year Zero and the things that influence making music.

Robert “… started playing the piano at six I think” and continued his musical education into adulthood. Along the way he “… got the chance about 10 years ago to work as a freelancer.”

Robert’s passion for music reaches out into a diverse set of classical musicians and modern musicians. Another genre of music that worked its way into Robert’s musical DNA “I’ve always been influenced by the music in films.” The composer and his team in Sweden believe ““You always draw inspiration from everything you’ve listened to.” 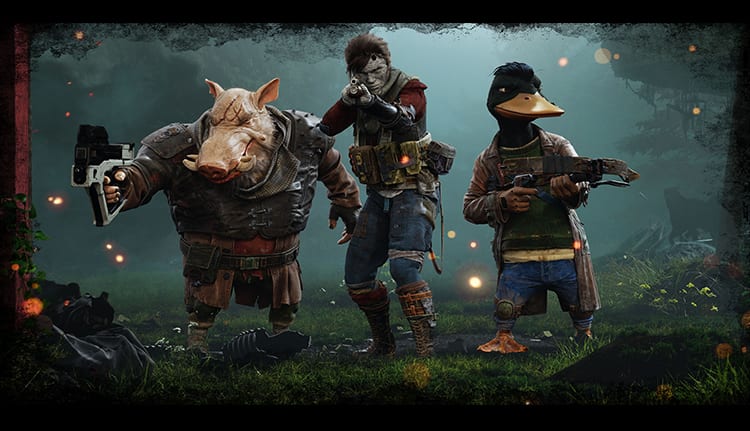 A video gamer, Robert says “I thought games and movies would be something fun to work on and use my musical skills to create stuff.” And along came Mutant Year Zero: Road To Eden, a turn-based strategy game that’s equal parts X-Com and Teenage Mutant Ninja Turtles. In Mutant, the players are sentient animals who must traverse a dangerous, post-apocalyptic world.

The influences on the soundtrack include a litany of bands from a specific kind of genre “For Mutant, I’ve been listening a lot to synth music like Depeche Mode, New Order, and Kraftwerk.” But the sonic texture includes other layers “… A lot of films scores like from Morricone.”

Robert laughs “I made a big playlist.”

Mutant is based on a tabletop role-playing game from the 80s. Naturally Robert “… drew a lot of from the 80s. The original tabletop game is from the 80s, so I thought about that setting a lot.”

Robert joined the Mutant project early on and says “The more the game developed visually, the more the music evolved into this 80s and synth-y style.”

What does Robert love about 80s synth? “It’s a style that gives a lot of freedom. You can always toss in more and more. More wet synths, more synth bass, or filter sweeps.”

One final thought on the influences on Mutant Year Zero and making music for video games, Robert adds “I’ve been playing the Fallout games and got immersed in the mood. So, I’ve been listening to a lot of modern game composers too like Inon Zur of the Fallout Series. His work is very appealing to me.”

Music in a movie or TV show is finite. You need 20 minutes, 30, 40, etc. In a video game, though, that music might need to go on for much longer. Robert says of composers like Zur and Jeremy Soule (Elder Scrolls) “After ‘X’ amount of hours you don’t find a repetitive pattern in those pieces.”

Mutant Year Zero: Road To Eden is available on a variety of gaming platforms. So what’s next for Robert and his team? “We’re doing a little bit of everything.”

Thanks to Robert Lundgren and Impact24 PR for making this interview possible.