Interview: Karl Mostert, The Artist Of THE MAN WHO F#%&ED UP TIME

The Man Who F#%&ED Up Time #1 hits your local comic book shop this week (February 5) and thanks to AfterShock Comics, Monkeys Fighting Robots has an exclusive interview with the artist of the series, Karl Mostert. 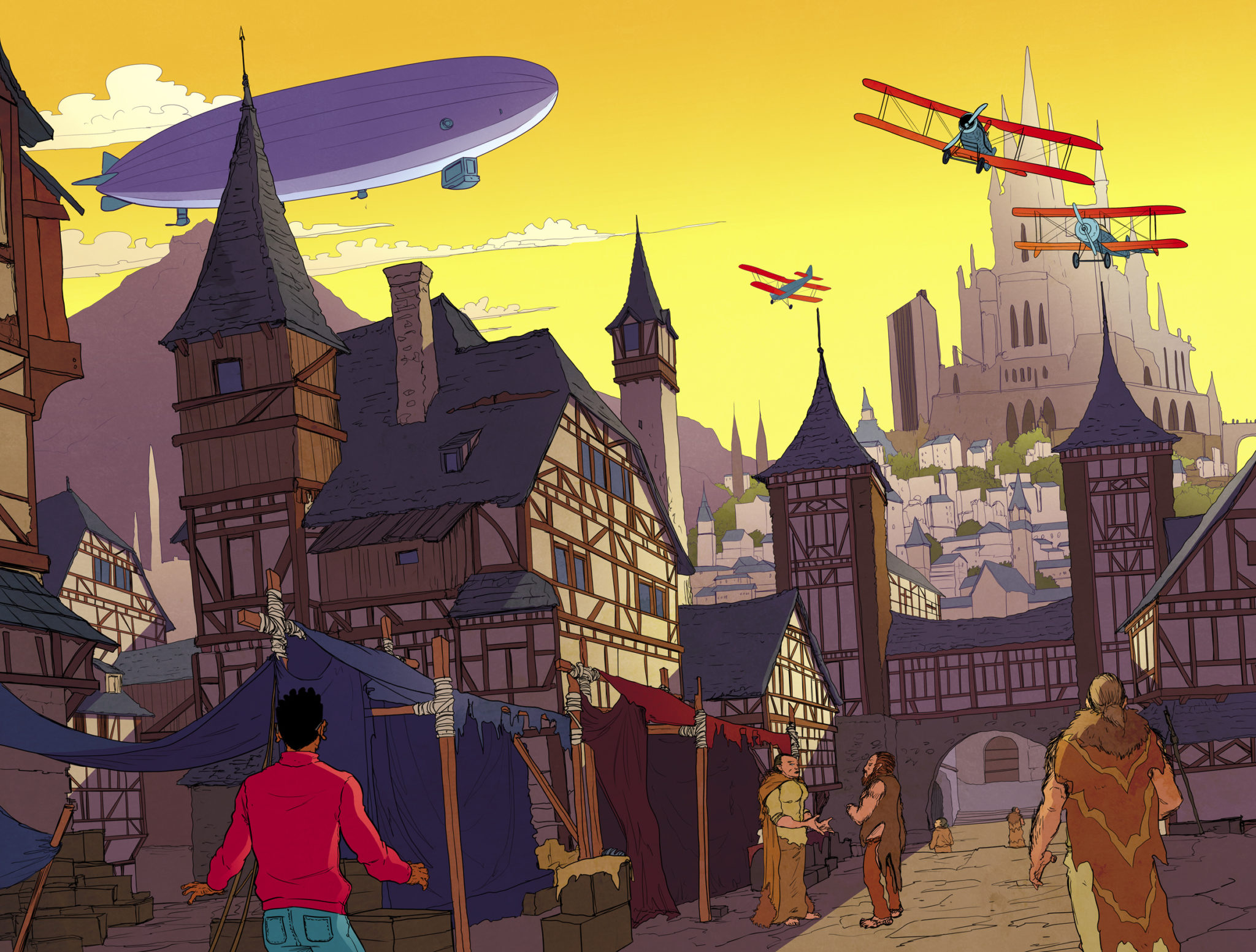 About the first issue:
Sean Bennett is just your everyday, ordinary lab worker in a high-tech lab with a proto-type time machine. And, yeah, he’s got the same temptations any of us would have about going back in time, just a bit, to correct mistakes of the past and right old wrongs. So, when he meets a version of himself from the future who encourages him to do just that, Sean takes the temporal plunge. Only…can you guess what happens next? Did you read the book title? Yup. All of TIME is f#%&ed up now, and it’s up to Sean to cor-rect it-or else!

The FOC for issue two is coming up next week, so make sure to contact your favorite comic book shop, and add it to your pull list.

Comics are a collaborative medium. How was your experience working with John Layman?

MOSTERT: We hit it off almost immediately. He contacted and friended me on social media and started chatting about the work and was helpful all the way, still is. My experience working with him on this story is truly an enriching one.

So, you get a script from John, what’s your first step after reading it? Your first reaction?

MOSTERT: This book specifically… “How in the seven hells am I going to do that?”

How do you make a comic feel like it’s taking place in a fully fleshed out world? Especially as the timeline starts getting more and more complicated?

MOSTERT: I’m not gonna lie, I e-mailed Mike and John a couple of times in the beginning and said, “I’m lost. I don’t know what’s going on.” To which they replied, “That’s the point.” I am a firm believer in backgrounds being super important to each and every panel and that they flesh out the world the characters inhabit in any story. I do fiddle with that rule of mine now and then, but mostly it’s understanding what’s going on in the background and keeping it constant. Also, telling stories of my own in the background with the art, besides the actual story, helps with fleshing out worlds for me.

Do you have a favorite character from TMWFUT? How about a favorite scene?

MOSTERT: Future Cops or Time Police or whatever they’re called. I love them. The scene where they burn a…I don’t know if I’m allowed to say.

Can you talk a bit about your approach to character design, and how specifically you went about designing the characters in TMWFUT?

MOSTERT: I think the normal people here were normal run-of-the-mill type designing, getting a certain look for a person’s face right after understanding what they’re about…the other things that John made me design…I remember reading in an interview that John said when we meet face to face one day, I would punch him in the face. That’s probably true. To be specific, I take a lot of references and mash them together is the best way to explain it.

What other forms of media would you say have influenced your style?

MOSTERT: Ooh, I don’t think I have a favorite, I could pick from all the different eras a couple of artists that I find I enjoy most, I could give two who are my absolute favorites, Frank Quitely and Moebius.

The aesthetic of the future is usually dominated by dystopian visuals. It seems like visions of the future either fall into Mad Max or Blade Runner, retro-futurism, or cyberpunk. How do you create an original vision of a future where time travel has mashed everything together?

MOSTERT: To be brutally honest, I think you’ve just answered the question yourself. This is a totally new take on a future landscape of mashed up things, and the more things get out of control for Sean, the more mashed up it gets. It’s a bit of a headache keeping things in order in my mind.

Making periods of time visually distinct seems like a challenge. How did you go about letting readers know visually that the characters were now in a different time period? Or that the Sean on the page was a Sean from a different timeline?

MOSTERT: Luckily for me, John wrote these things into the script, and chatted with me in detail about what he wants—I try my best to follow what it is he wants. Thankfully, everything I did so far worked for him. I think for the readers, you will definitely know that Sean’s gone to a different time. There aren’t subtle hints; there are massive Blue Whale-sized clues.

There seems to be some inspiration from RoboCop in the Time Police Sean runs into at the end of the first issue. What was it like designing time cops, and how did you make them distinct from future police/time law enforcement in other media?

MOSTERT: Definitely some Robocop in there, the Eighties version not the newer one. But I think I made them with the mindset that their looks can be deceiving. They don’t look tough, but they seriously are quite deadly.

MOSTERT: Sci-fi it would have to be Blade Runner, both the original and the sequel. As for time travel, I think Edge of Tomorrow was superb.

Do you have a favorite AfterShock title?

MOSTERT: ANIMOSITY is something I really like the look of.

Can you pinpoint the moment you knew you wanted to be a comic book artist?

MOSTERT: Ooh, no. Been fascinated by comics and art for my entire life.

Who were your major influences along the way?

MOSTERT: Joe Mad used to be one of the favorites, but as I started looking at Frank Quitely’s art, that’s stuck for years now. The man can do no wrong.

Do you have a mentor?

MOSTERT: Not that they know it, but Quitely and Moebius influence my work quite a lot.

A movie that should have been a comic first but wasn’t.

A comic that should have become a movie but didn’t.

MOSTERT: I don’t, unfortunately. I do, however, listen to British game shows.

Best moment of your career that has happened so far…

MOSTERT: As a South African artist, to get noticed by people in America where comics are huge and have them like my work was HUGE!!

Best moment of your career that is yet to come?

MOSTERT: Winning an award for my art. 😊

What did you think of the interview, and The Man Who F#%&ED Up Time? Comment below with your thoughts.