New Netflix drama What/If comes from Revenge creator Mike Kelley who drew inspiration from a lot of 90s thrillers and pulled a coup by getting Renée Zellweger to star in a T.V. show for the first time ever as a regular cast member. Another addition to the team is composer Fil Eisler (Empire, Revenge) who layers the show with a little noir here and some industrial sounds there.

According to Netflix, What/If is a “neo-noir social thriller” that “explores what happens when acceptable people start doing unacceptable things.” It’s also an anthology series much like American Horror Story that will morph every season. Season one focuses on Anne Montgomery played by Renée Zellweger who makes a devious offer to a cash-strapped San Francisco couple named Lisa Ruiz-Donovan (Jane Levy) and Sean Donovan (Blake Jenner). From there, things unravel and descend into chaos as Anne manipulates everyone around her.

PopAxiom wondered … what if we could interview composer Fil Eisler about making music, What/If, and Superintelligence? 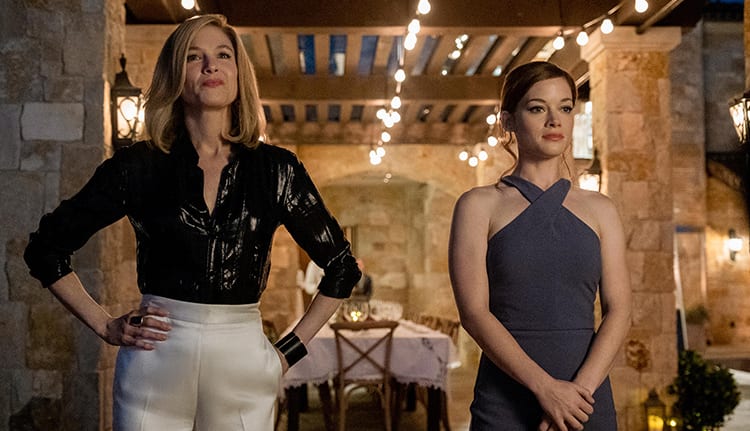 Fil Eisler previously worked with What/If creator Mike Kelley on Revenge. However, the sounds of both shows are quite different. “We deliberately wanted to go in a different direction.”

What/If is undoubtedly influenced by 90s thrillers like Basic Instinct and Indecent Proposal. “They deliberately took a lot from that. There are even a few cameos.”

The music for What/If is a hybrid of sounds. “What we ended up coming to was that Anne Montgomery had this neo-noir orchestral sound but underneath that would be the machinations of this Machiavellian scheme going on.”

Fil says about Kelley, “ … makes things very twisted and dark, which is right up my alley.”

To achieve some of this twisted mix, Fil says, “I spent a lot of time delving in the world of modular synths.”

Elaborating on the score of What/If: “There’s a very dark, sort of industrial undertones but with this quiet and lush orchestral … over the top. Proper themes, proper melodies, so in a lot of ways it’s very old school.”

Nineties thrillers were light on the noir elements when it came to the score. For Fil, he went way old-school: “Film-noir to me goes way, way beyond … much further back. The 40s, 50s, and even 60s.”

But Fil doesn’t think it was a conscious influence, “They’re sort of part of my DNA.”

Fil Eisler was born in Prague and doesn’t remember life without music in the house. “We had a grand piano … so music was always around me from an early age.”

Growing up, Fil had an English grandmother who was a violinist and later taught music therapy. “She’d sit with me at the piano, and we’d make up stories with music.”

Sure, as a kid there was a lot of senseless key banging going on here sometimes but, Fil says, “It’s really fun and something I do now with my kids.”

As early as four or five, Fil started taking piano lessons and also sang in the choir. “My dad brought home a guitar once when I was around eight years old, and that was it. I fell in love with it. That became my instrument.”

Fil grew up in a theatre-centric, classical music surrounding, so the idea of film scoring, “… came much later.” However, Fil was undoubtedly a fan of film too. “If there was something I was obsessed with besides music, it was movies.”

As a kid, Fil says, “I don’t know how much I made the connection … between films and who was making the music.”

But he does recall the kind of movies that made their way into his creative DNA. “Spielberg, James Bond, James Cameron, Ridley Scott … lots of horror movies and that was in the 80s, the sort of golden age of slasher films.”

Movies like those made Fil, “… want to do that.”

Much like so many musical artists owe a lot to the Beatles, or Elvis for you Elvis people, Fil thinks the same goes for John Williams when it comes to scoring. “To this day he’s the master.”

Williams was a household name in the 80s because of Star Wars and Indiana Jones, oh, and E.T., oh, and … you get the point. But Fil, “… never thought of the music separate from the film.”

Fil adds, “I could always sort of close my eyes and see visuals with the music. It’s always been there.”

Another upcoming project from Fil is a film starring Melissa McCarthy called Superintelligence. It’s a comedy about something potentially terrifying — artificial intelligence.

As for the music: “Superintelligence is very much an orchestral score in the vein of a Williams or Silvestri.”

Fil will soon be at work on the sixth and final season of the hit FOX series Empire.

Thanks to Fil Eisler and Rhapsody PR for making this interview possible.