I was fortunate enough to get to talk to James about this new volume and his influences, the process, and his experiences working with the amazing art team on this ass-kicking adrenaline shot of a comic book. 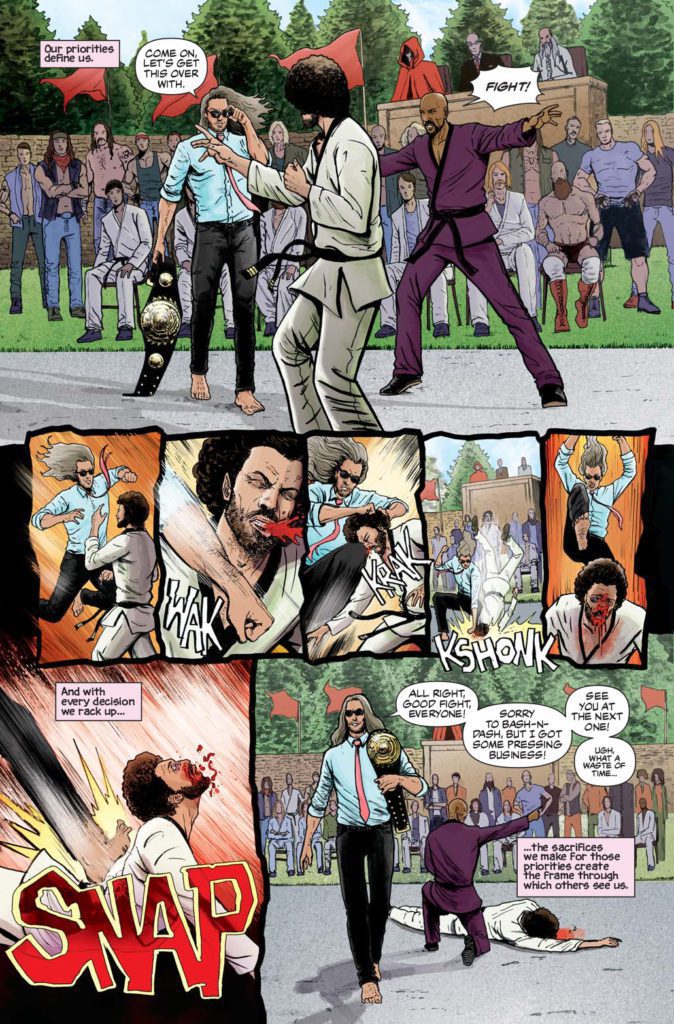 MFR: This series wears its influences on its sleeve, ranging from Bruce Lee’s films to The Raid, and of course some classic comics like Shang-Chi and The Deadly Hands of Kung Fu. As a writer, how did you manage to maintain the line between homage and outright copy?

JM: In a genre that has a lot of history and influential titles, I found it was best to be aware (as much as is possible) of the ground that’s covered by other creators. Then draw a focus on the aspects, details and character traits that would make DL stand out as a unique experience. Sure, there’s going to be nods and overlap, but after doing our best to understand the works that laid the foundation of this genre, the main through-lines of Dead Legends are all me and Gavin.

MFR: We find ourselves in a Golden Age of kickass, unique women protagonists in comics and other mediums. Where did the idea for Yan and Red Death as the two leads in Dead Legends come to you?
JM: From day one, Gavin had the design made for Red Death as a staple character in the series, but it took some time and planning for us to come up with Yan. Once the groundwork for Yan was set, she took the spotlight and ran with it. And even though I’d like to think Dead Legends embodies an ensemble cast, the standouts from that crew have always been Yan and Red Death. Partly because of the history that brought them to this tournament, and partly for the brutality they employ to reach their goals.
MFR: Something folks may not realize is how insanely difficult writing and scripting a fight scene can be – much less dozens of them. What was your process like for coming up with all of the fight sequences through this series?
JM: Mainly, I wanted to balance the pages devoted to character drama and those dedicated to combat. To do that, Gavin and I worked out a system that essentially let us put our individual focuses on the page. I was more into the difficult choices facing these characters, while Gavin was able to use the allocated space to choreograph some brutal fights. Finding the balance to those two aspects takes some back and forth, but the collaboration has helped bring out the best of both approaches to this series. 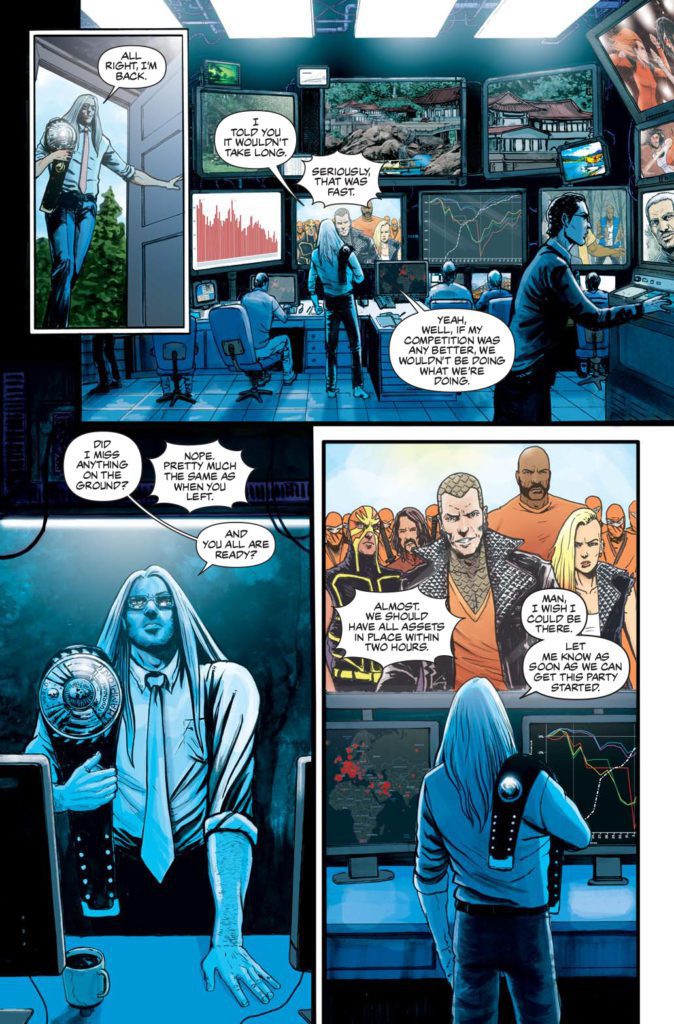 MFR: The main cast is wildly diverse, both in terms of representation and personalities. How did you come up with the cast, and how did their voices develop as you wrote them?
JM: I approached the series with certain characters locked in. Red Death, Damon, Stalk and a handful of others had their design and voices from the start, but others found their way after the first pass of the issue 1 script. By the time I sent off the final draft, I felt the foundations for each of them were set and made moving forward to later scripts that much easier.
MFR: Gavin Smith draws the hell out of every page in Dead Legends, and Ryan Ferrie’s lettering is super clean. How did you all start working together, and what was your combined process like for this series?
JM: Gavin and I have been friends for years, and we’d always talked about collaborating on a project together. When a spot opened up in his schedule, I asked him what he wanted to draw most in a series, and he said a martial arts book and even showed me some of the characters that he’d want to use for the series (Blind Tiger was one of these characters). Things worked out, and here we are. Ryan and I have been con buds for a while, and he came on board because he liked the concept, and even though he was phasing out of lettering work to focus on writing, he did us the favor of taking on Dead Legends. 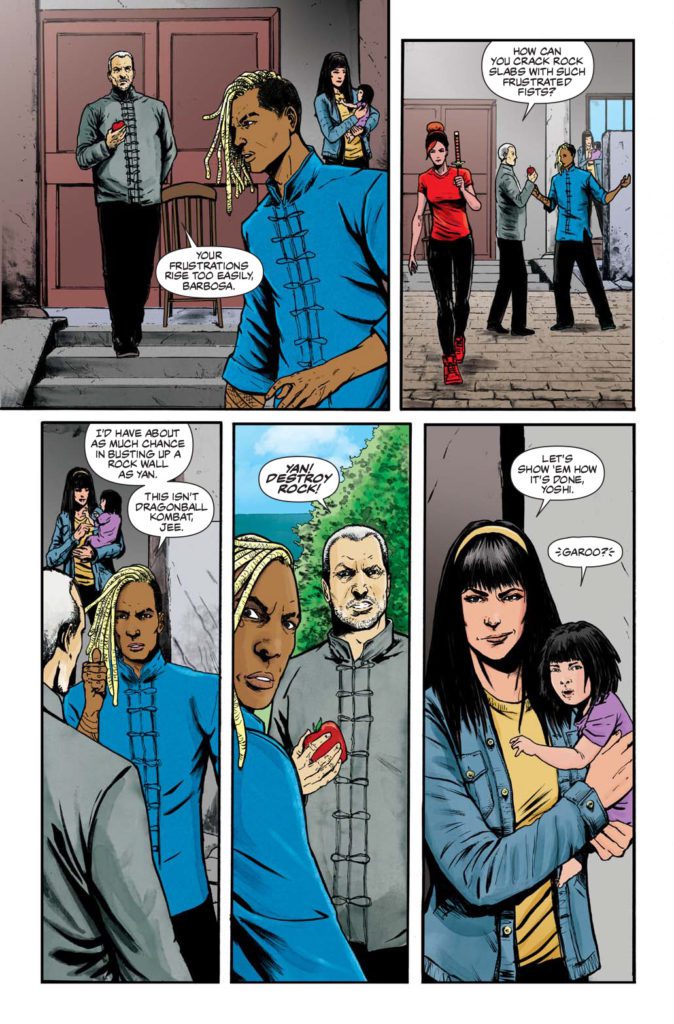 MFR: How did publisher A Wave Blue World contribute to the process behind this book? What kinds of tips and encouragement did they give to help achieve this vision of tightly-woven ass-kickery?
JM: Tyler and Wendy Chin-Tanner (the co-publishers of AWBW) have been a driving factor in getting this series into the hands of readers. Before he departed AWBW, Joe Illidge was on point in his role as editor and he strengthened the story for both volume one and two with his suggestions and critiques. But throughout the journey of this series, Tyler has pushed us to tell the kind of story we think is both fun and important, trusted us with constructing the vision, and provided us with the support to make it happen.

“This comic is ultimately a challenge in balancing emotional storytelling with the action of classic martial arts movies and Kung Fu comics,” writer James Maddox explains. “The resulting approach offers relentless action that punctuates a story of loss, perseverance, and found families.” 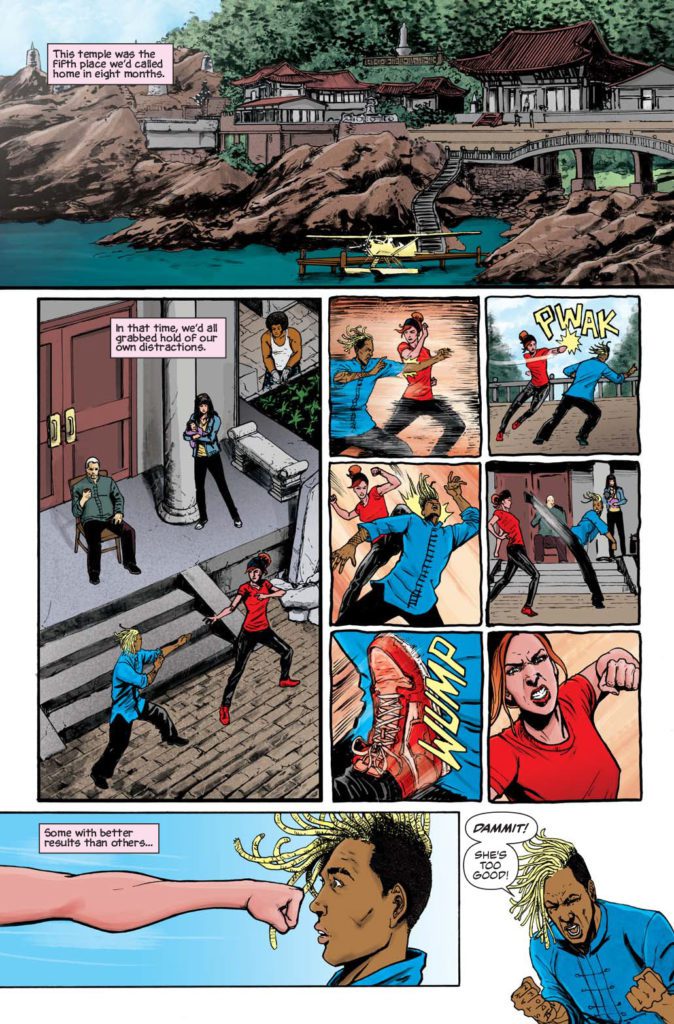 The continuing story follows the trials of Yan, a young woman trained by her grandfather, Jee Sin—one of the most deadly and experienced martial arts experts in existence. After winning the last Dead Legends tournament and taking lethal revenge on her husband’s killer, Yan flees the competition’s self-destructive overseer and his army of merciless followers. Luckily, she has friends like Red Death and Stalk to aid her and the child. But new adversaries, including the unhinged Tigress, will resort to sinister tactics that Yan and her fellow refugees couldn’t fathom.

The resulting comic should resonate with fans of iconic cinematic martial arts film, including Riki-O: The Story of Riki, Ong-Bak: The Thai Warrior, Bloodsport, The Raid: Redemption, Kill Bill, and the seminal oeuvre of Bruce Lee.

“This second outing allows me to dive deeper into both the technical roots of martial arts, as well as its more fantastic extrapolations,” artist Gavin Smith—who holds a black belt in Tae Kwon Do��elaborates. “I can’t wait to show off the intricate web of issue four and some of Red Death’s most savage fight scenes. James and I were able to amplify the sheer chaos and brutality of the first volume. 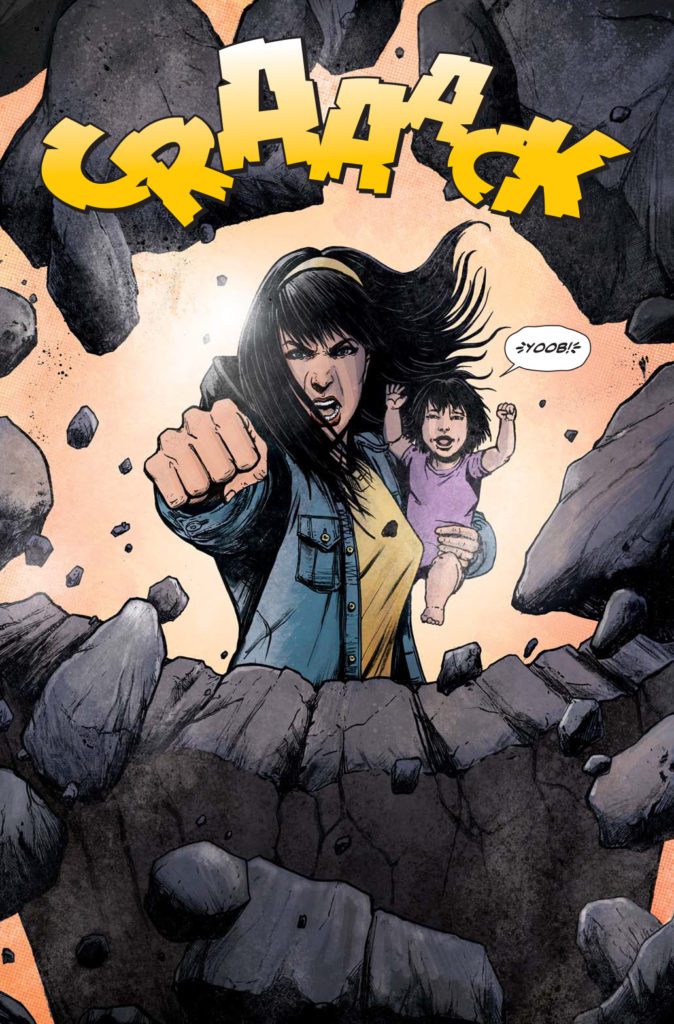 Be sure to check out the first and this second volume of Dead Legends from publisher A Wave Blue World, available now!