The evergrowing indie publisher Scout Comics has announced another exciting title, Last Stop. Written by Trey Walker, with art by Hoyt Silva (Drink Champs, AOC and the Freshman Force, Shock Anthology), and letters by Micah Myers, Last Stop has a fascinating set up: When he’s diagnosed with a life-threatening disease, the world’s last Super is ready to die in peace, until an old nemesis and a new threat emerge!  But is there enough time? Sounds great right? Well here’s more information and some words from the creators! 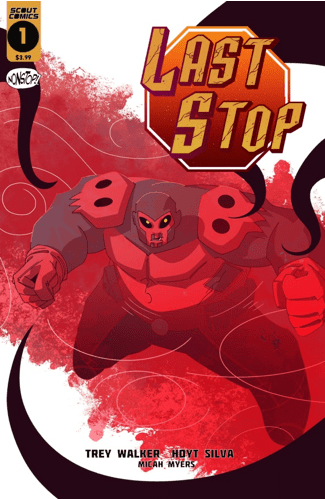 Time is ticking for the world’s last superhero. Lincoln Adams (aka Unstoppable) must make peace with the changing world around him—can there truly be a place for him in a world without Supers? After learning he has a terminal disease, Lincoln sees an easy way out; however, the re-emergence of an old arch-nemesis and a new shadowy masked figure turn Lincoln’s plans of an easy passing on their head. Can Lincoln stop this new threat before the disease stops him?

Writer Trey Walker had this to say:

From releasing it originally as a webcomic to successfully funding a Kickstarter edition of the graphic novel, the reception to LAST STOP over the past year and a half has been heartfelt and amazing! The real cherry on top, however, is that we now get to team up with Scout to share our story about a hero confronting his own looming mortality.

Scout Comics is really pushing the envelope with the titles they are putting out and I couldn’t be happier to have them publishing LAST STOP. Is there a better home for creators than one crafted to pursue innovation and taking a chance on ideas that are outside of the box? I don’t think so!

Scout Comics Publisher and CCO, James Pruett also had something to say:

I’m excited to welcome Hoyt and Trey to the team. I’ve known Hoyt for years and we here at Scout are all very excited to bring LAST STOP into the Scout Family!

Scout Comics was founded to discover, develop, and support content creators in addition to helping translate their projects to different platforms and mediums. The label has had several breakout hits recently, including Gutt Ghost, Long Lost, The Mall, Midnight Sky and Stabbity Bunny. To learn more about Scout Comics, please visit us on our Facebook Group: “The Official Scout HQ” or go to our website at www.ScoutComics.com.