HELLBOY AND THE B.P.R.D.: LONG NIGHT AT GOLOSKI STATION

Dark Horse Comics’ Hellboy Universe is a daunting one with its 20 plus year history, luckily Wednesday’s HELLBOY AND THE B.P.R.D.: LONG NIGHT AT GOLOSKI STATION is a quick, quirky and fun entry-level comic.

All Aboard The Story Train

Long Night At Goloski Station is exactly what its name implies; a continuous night at a train station. The reason this is important? When a story takes place all in one night and location, it’s easier to tell a focused, new reader friendly story. That’s exactly what Mike Mignola achieves.

Finding a single issue in the Hellboy Universe that invites new readers, while telling an in-canon story that barely references past events is hard. Luckily, Mignola crafts a story that revolves around minimum core characters (only Hellboy), and minimum references all wrapped in a tightly focused one and done tale. Mignola can achieve this feat with the classic story beats: horror, comedy, and love that is seen throughout his famous Universe.

Long Night At Goloski Station is interior artist Matt Smith’s first foray into the Hellboy Universe. Not to be confused with Matt Smith (Matthew Dow Smith) who worked on some titles in the 90’s. Turns out there are a few Matt Smith’s in the entertainment industry.

Smith’s style works perfectly for the one-shot, as it mirrors Mignola’s style just not as heavily inked. This likeness is the best-case scenario for newcomers, as it will ease them into Mignola’s unique style. Smith’s characters do look a little more human-shaped, but for the story being told the art works.

The action scenes throughout are fluid while containing a fair amount of chaos transpiring around them. When a character busts through a door it explodes with the splintered wood flying around. In more dramatic cases of action, colorist Dave Stewart voids the background, then adds a dramatic color effect.

Stewart’s name is a staple in the Hellboy Universe. Having been on nearly every title/issue, it’s rare you don’t see Stewart’s name attached to a title. Stewart’s colors continue to help the Universe thrive, voiding panels when needed, or making them more bombastic. There’s a reason he has stuck around these comics, and in Long Night At Goloski Station it shows.

Another veteran joins the team in the form of letterer Clem Robins. Robins continues the trend of knowing what works for a Hellboy comic and showcasing it in the one-shot. With great bubble placement, and the ability to make small sound effects sound large, or large ones feel more substantial, it makes sense why he has also stuck around.

Train Leaving After a Long Night At Goloski Station

Cover Story: Mignola’s famous cover of having the location, characters, and specific items smack dab in the center returns for Long Night At Goloski Station. Some may think it’s not much. But, as a Mignola fan it’s always awesome to see these covers! 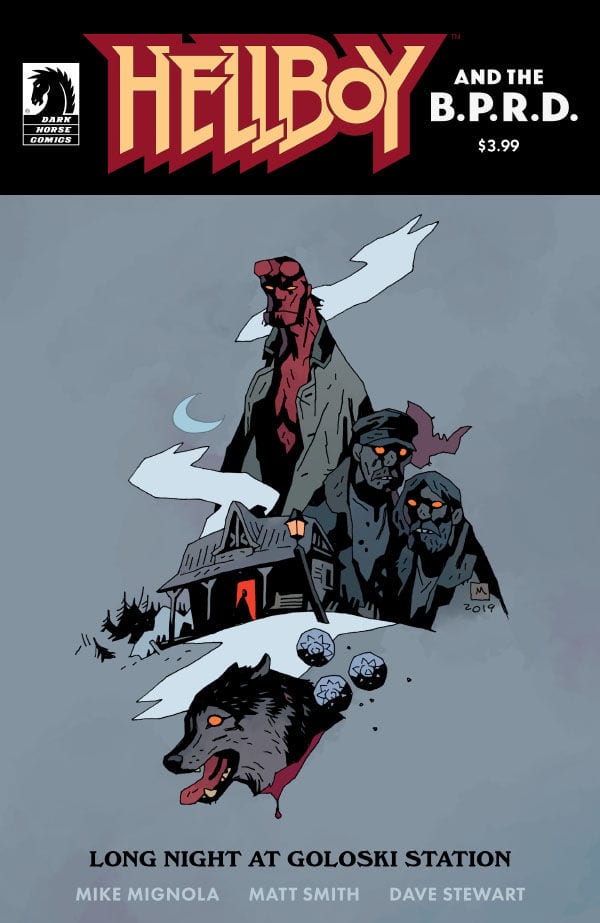 New/Old Members of The B.P.R.D.

Did you read Long Night At Goloski Station as a newcomer or long-standing fan of the Universe? Let us know what group you fall under and what you thought below!

Plus, check out why you should start reading the Hellboy Universe if you aren’t already!