HEARTBEAT #3 – Eva Takes The Next Step Down A Spiraling Path

This Wednesday, Eva loses her innocence as she fully enters a dark world filled with secrets and actions that she cannot return from in Maria Llovet’s Heartbeat #3.

*Trigger Warning* There is mention of wrist cutting as it happens in Heartbeat #3 and seems crucial to the story. So please let this serve as a warning before going in.

In case you haven’t read our reviews for the previous two issues here is Heartbeat #1, and issue two. But, if you’re caught up, pick up issue three at your local comic shop.

A SLOW AND STEADY HEARTBEAT

BOOM! Studios’ Heartbeat #3’s story continues to be told in a different manner than usual. We’ve mentioned that in the previous two reviews, yet in its third issue, it absolutely rings true. Whereas other comics have up to 20 dialogue bubbles on a double (sometimes single) page, Heartbeat #3 barely has that in its first ten pages. Instead, Maria Llovet doesn’t waste any bubble on words that needn’t be said. Anything spoken/thought furthers the plot instead of just filling space. This works in favor of Llovet’s story, giving it the chance to breathe.

At times Llovet will void the page of all dialogue/narration or keep it only to one bubble. In these scenes, she allows her art to tell the story. When Heartbeat #3 hits its crescendo, Llovet uses only a few words to help the scene hit harder. At this moment, it seems Eva has finally crossed her moral line with no sign (or way) of looking back. One thing I would take note of is the manner Donatien cuts their wrists.

During the final moments when Eva and Donatien embrace in sexual acts, Donatien slices Eva’s wrist down, but slices his side-to-side. This could mean nothing, but we know he has done this before. Meaning, he knows slicing down has a higher chance of killing then doing it to the side. This makes it seem that he does want to kill Eva. Or this could be him making a mistake. Nonetheless, this small detail seems as if it’ll play a huge part later.

Llovet’s art is gorgeous, with small details sticking out that seem to matter as much as the larger details. During some panels, she tends to focus on something that seems not to matter, yet it does. Some of the panels shown in Heartbeat #3 are visually striking, proving Llovet has a hell of an eye for visual composition. Although we aren’t talking about a film, Llovet’s framing for certain elements in the panels is cinematic beauty. Some could pass as stills taken from a film. Although each panel is alluring with her phenomenal art, that isn’t the only visual element she excels at.

As she’s brilliant with her pacing of Heartbeat #3 with the changing of panel sizes. This can be seen in the constant “heartbeat” of near-symmetrical rectangle panels, keeping the pages evenly paced. But, when tension builds, she places more rectangles on the pages showing an increase of speed. Other times she adds smaller square panels to show quick scenes that matter, yet shouldn’t take up space. The color palette of Heartbeat continues to mirror that of realism. During some scenes, the colors do shine bright, yet never enough to not seem real. The colors showcased throughout help sell the eerie setting without going over the vibe Llovet sets out for.

Llovet’s moral breaking story was originally published in Spanish. Later on, it received translations in several different countries. BOOM! Studio’s English version is translated by Andrea Rosenberg. Nothing seems off in this translation, nor weird in word usage. AndWorld Design remains on lettering, which as with past issues, works quite well.

Llovet’s slow-building tale has been phenomenal in all three issues. Yet, the story matter and the way Llovet tells the plot in Heartbeat makes it hard to recommend to others. I’ve said this of the other issues, yet it feels even more so in the third issue. This, due to some of the taboo factors Heartbeat #3 involves. Nevertheless, Llovet continues to show how amazing she is as a creator in every aspect.

Cover Story: Heartbeat #3’s cover is beautiful in its visuals, yet the message it brings is as great. Llovet shows Eva tangled in strings with various items caught up with her. Each of these items plays a part in the story being told. Whereas the entanglement shows how caught up Eva has become in Donatien’s world. 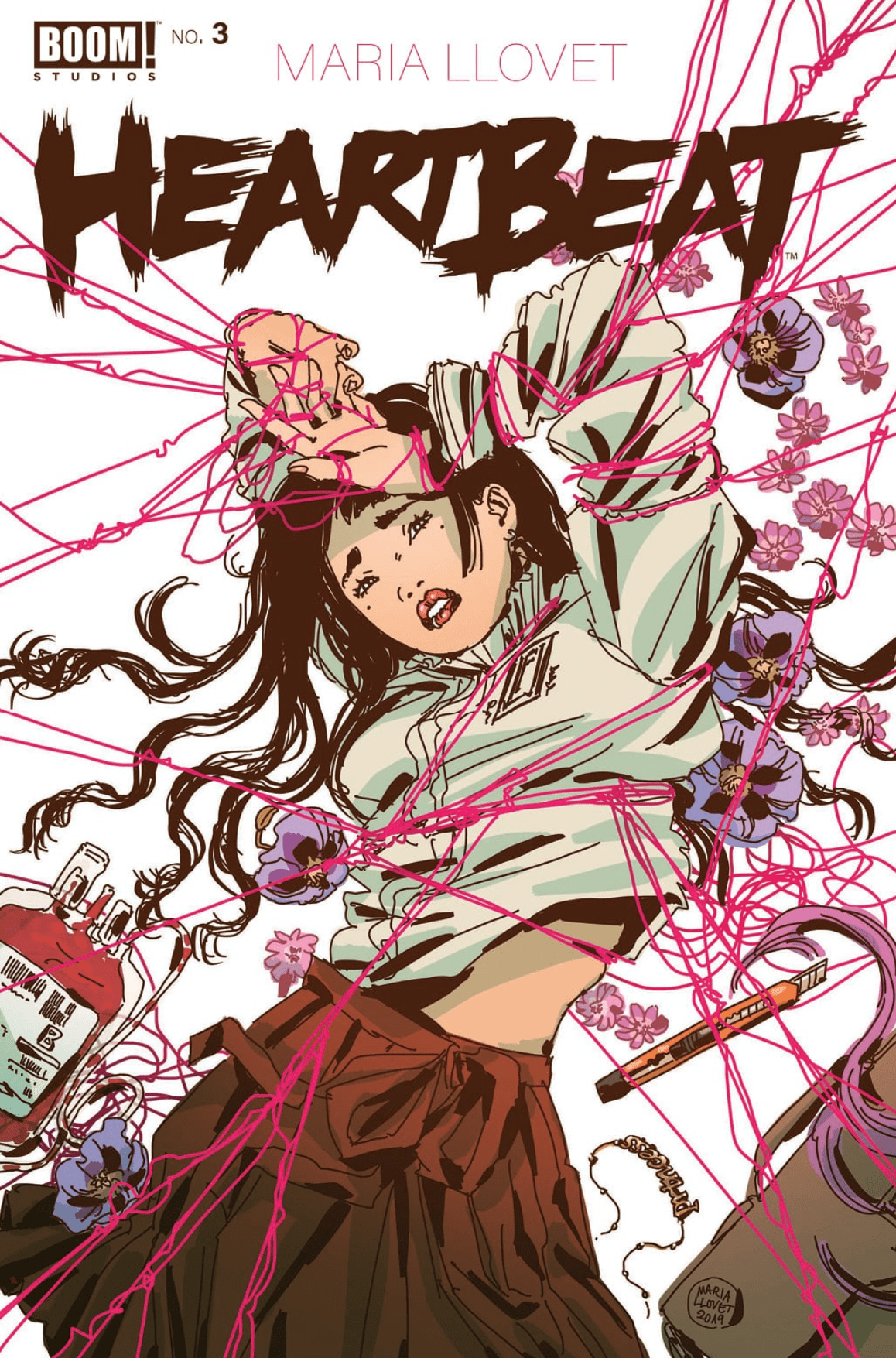 Memorable Quote “If you’ve sprinkled the gasoline, lit the match, and fed the flame, how can you be surprised by the explosion?” – Eva

I usually only go with a Cover Story or a Memorable Quote. Yet, this quote is amazing, and equally so is the cover.

Have you been following Eva’s slow descend in Heartbeat? If so, let us know what you’ve thought so far.

HEARTBEAT #3 - Eva Takes The Next Step Down A Spiraling PathHEARTBEAT #3 shows Eva finally step completely over her moral line in a haunting slow build that will keep you wanting more.