I’ve never done LSD, but thanks to Hazel & ChaCha Save Christmas, written by Scott Allie and Gerard Way, with art by Tommy Lee Edwards and letters by John Workman, I think I get the gist. This Christmas story is the kind of story you may only half understand, but in the end, it’s such a fun ride you’ll enjoy the confusion just as much as the revelations. It’s a great addition to the Umbrella Academy universe as it follows stylistically in its steps.

While the events of the story aren’t always particularly clear, writers Allie and Way do make it clear early on that the point of their story is the ride, not the destination. In many ways, this story seems reminiscent of Pulp Fiction. Hazel and ChaCha have plenty of unrelated conversations about ghosts and soup while their jobs and the events of the comic effectively “go on in the background.” The result is not only hilarious, but it connects readers to these characters beyond just their function within the story. We shouldn’t connect with time-traveling hitmen. Somehow, with Allie and Way’s writing, we really do.

Edwards’ art allows us to enter further into the minds of our “protagonists.” We see the world through Hazel and ChaCha, and the results are simultaneously beautiful and terrifying. On one page, Hazel and ChaCha discuss Hazel’s belief in ghosts while they interrogate a man. Hazel says he believes ChaCha’s phone is haunted. ChaCha says, “My phone isn’t haunted.” As we see ChaCha’s response, we clearly see through Hazel’s untrusting eyes as we see ChaCha’s face covered in shadow with his eyes glowing in the dark. Similarly, a character seems to make Hazel and ChaCha made, and we know the character’s outline shift from black to red. Seeing through these characters is both psychedelic and gorgeous. 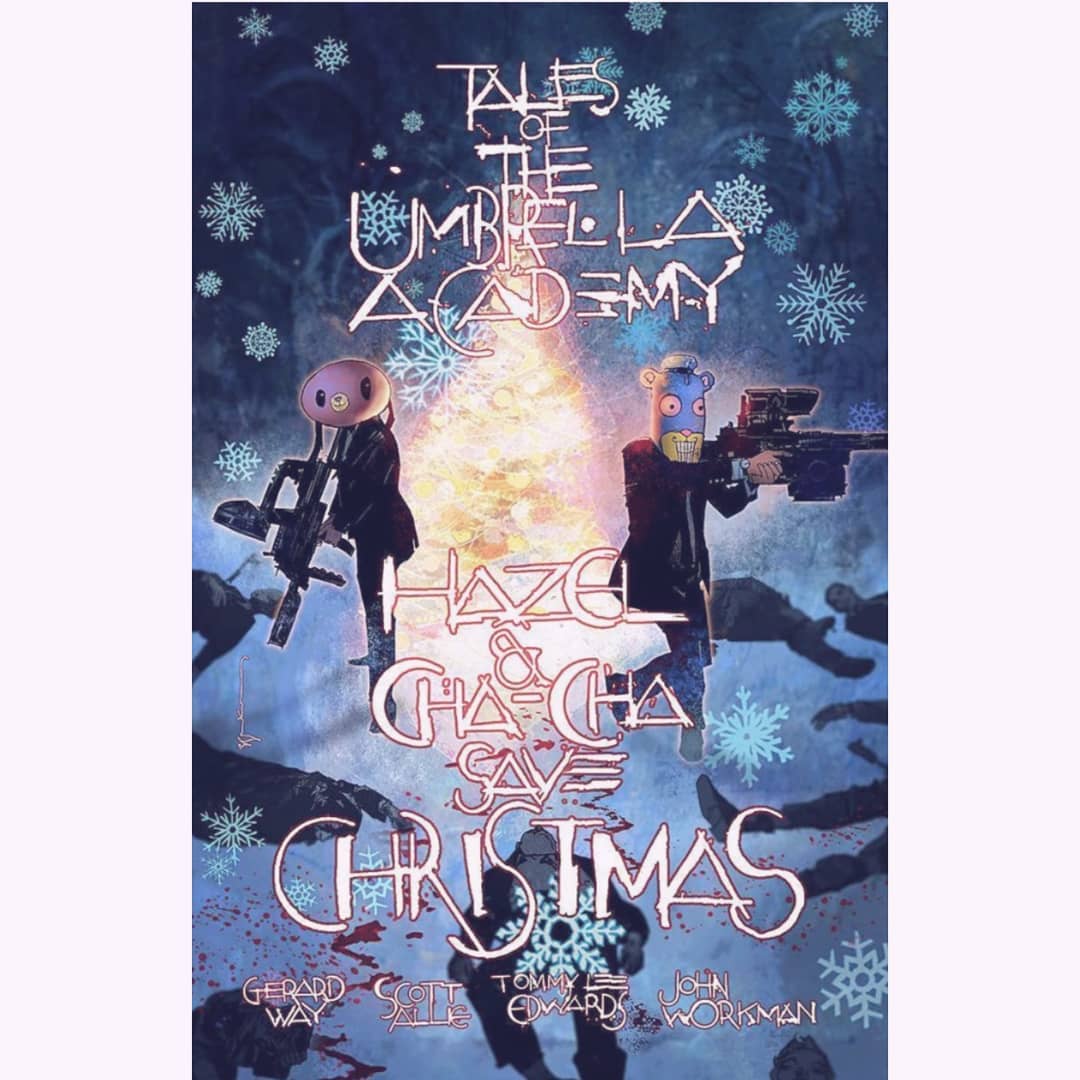 The coloring by Edwards’ creates a great sense of mood throughout the story. At first, it seems as though Edwards simply uses darkness to convey danger or evil, yet it’s actually his use of extremely bright colors in climactic moments that create a kind of ghostly effect. When Hazel says he believes ChaCha’s phone is haunted, the next panel shows us the phone cast in a ghostly bright red. By keeping the rest of the comic relatively dark, Edwards makes it so that these moments jump out at us. He even manages to make Christmas lights seem like a spooky sight. 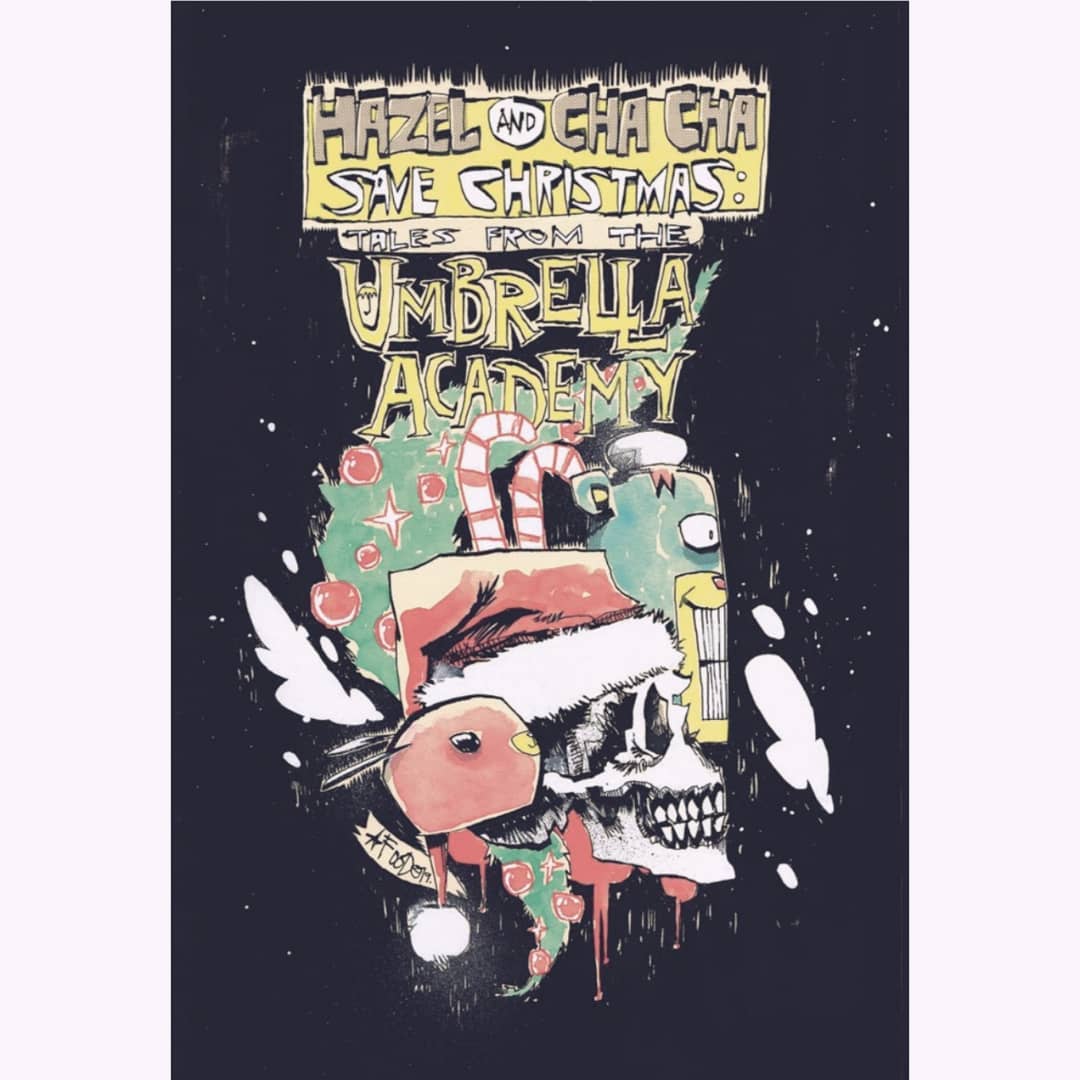 Finally, Workman establishes the preoccupations of these characters perfectly with his lettering and placement. In many of Hazel and ChaCha’s scenes, we see their speech bubbles take up large amounts of space in the panel. At times their speech bubbles overlap those of other characters, events in the panel, or other characters altogether. These characters are frankly just more interested in talking amongst themselves than they are in whatever the hell else is going on. Workman’s use of font size also conveys the tone and rhythm of their conversations. When ChaCha casts doubts on something Hazel says, we see Hazel respond in a font that has doubled in size. This helps us see how quickly these characters get a rise out of one another and gives us a feeling of what the rhythm of their friendship is like.

Hazel & ChaCha Save Christmas is odd, it’s beautiful and it’s a riot. If you’ve liked The Umbrella Academy, this comic fits perfectly into the series in style and tone. Sitting down and giving this strange little comic a read is a great way to get into the Christmas spirit. Just please do us all a favor, and don’t forget to read it with soup!

This is a really entertaining comic and even when you feel like you have unanswered questions, you kinda just don't care.HAZEL & CHACHA SAVE CHRISTMAS is a Trip, You Might Not Get It, Then Again, You Might Not Care