GOTHAM CITY MONSTERS #4 May Be a Secret Big Deal

Gotham City Monsters #4 is written by Steve Orlando, with art by Amancay Nahuelpan, colors by Trish Mulvihill and letters by Tom Napolitano. With few big name characters in this series, Gotham City Monsters doesn’t seem to be getting a lot of attention. But the story is consistently making big choices that might make waves in the DC Universe. 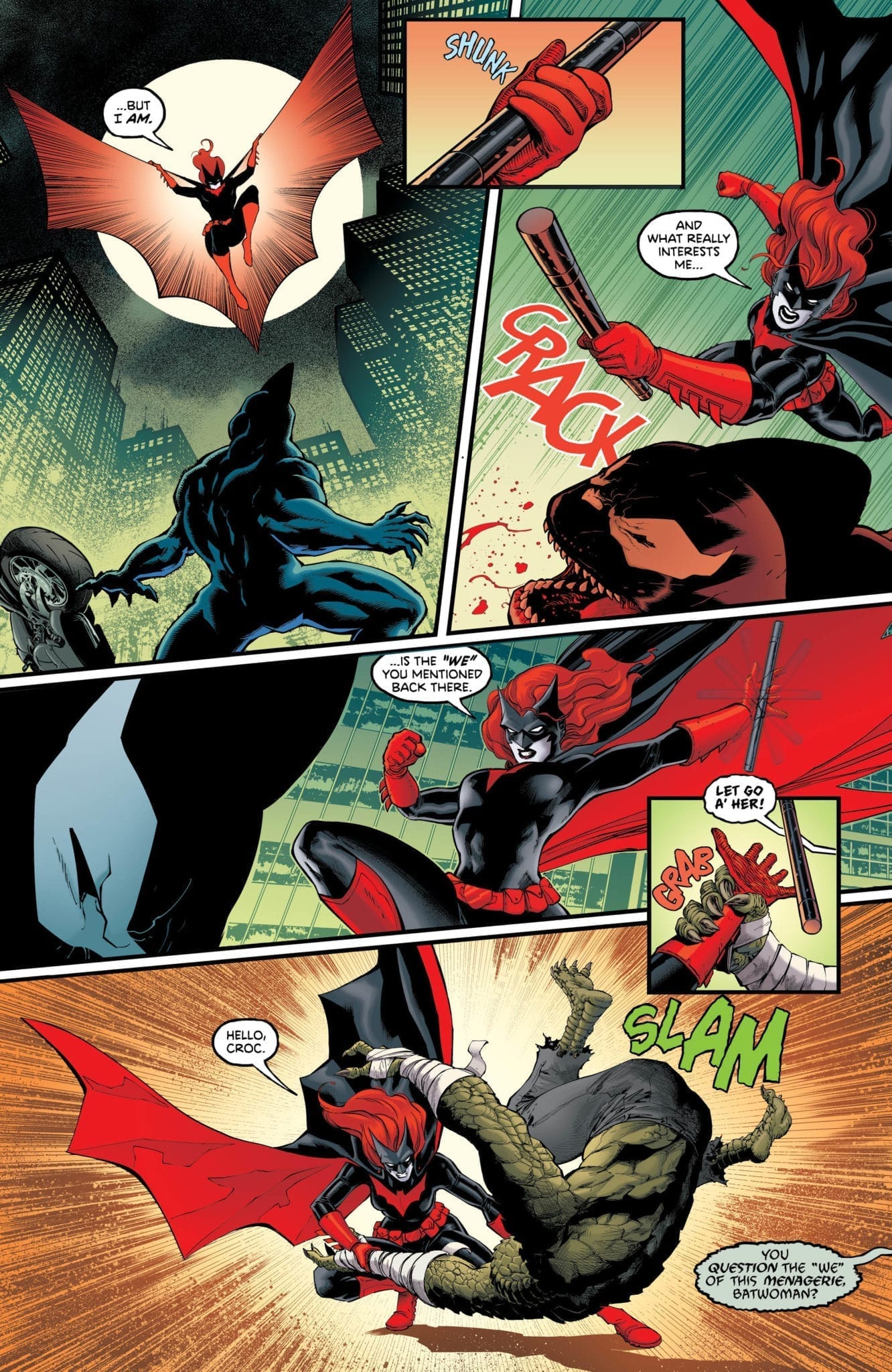 Orlando’s writing for the series strikes an interesting balance. Everything matters in the long run, yet the quips seem ill-timed. Plot-wise, Orlando is fantastic. He pulls from Grant Morrison‘s Seven Soldiers of Victory, honoring Morrison’s work while pushing the characters in new directions. Tonally, it feels as though Orlando is impatient for his characters to have a rapport that feels unearned. Frankenstein and I… Vampire have inside jokes, but it feels like the reader isn’t in on them. It may be a few issues before this series hits its tonal stride.

Nahuelpan’s art is gorgeous and completely unrestrained. He pulls out all the stops on every page, filling each panel with explosive backgrounds and expressions. Even the most frightening moments are rendered so brilliantly, it’s hard not to revel in the splashes of blood. As Melmoth and his mandrills track a pair of orderlies down a dark hallway, the scene is so beautifully set you find yourself hoping to see it play out. Nahuelpan’s pencils and inks don’t disappoint in giving even the most vulgar moments a sense of gracefulness.

Mulvihill’s colors are similarly breathtaking. Mulvihill’s use of lighting throughout the issue helps accentuate the darkness. Melmoth walks through a sewer, and the light from a car on the street above streams through an open manhole. When the mandrills’ hands begin to burn like red embers, the glow on their faces juxtaposes with their black surroundings. Mulvihill really achieves a somber mood through his interplay of light and dark. 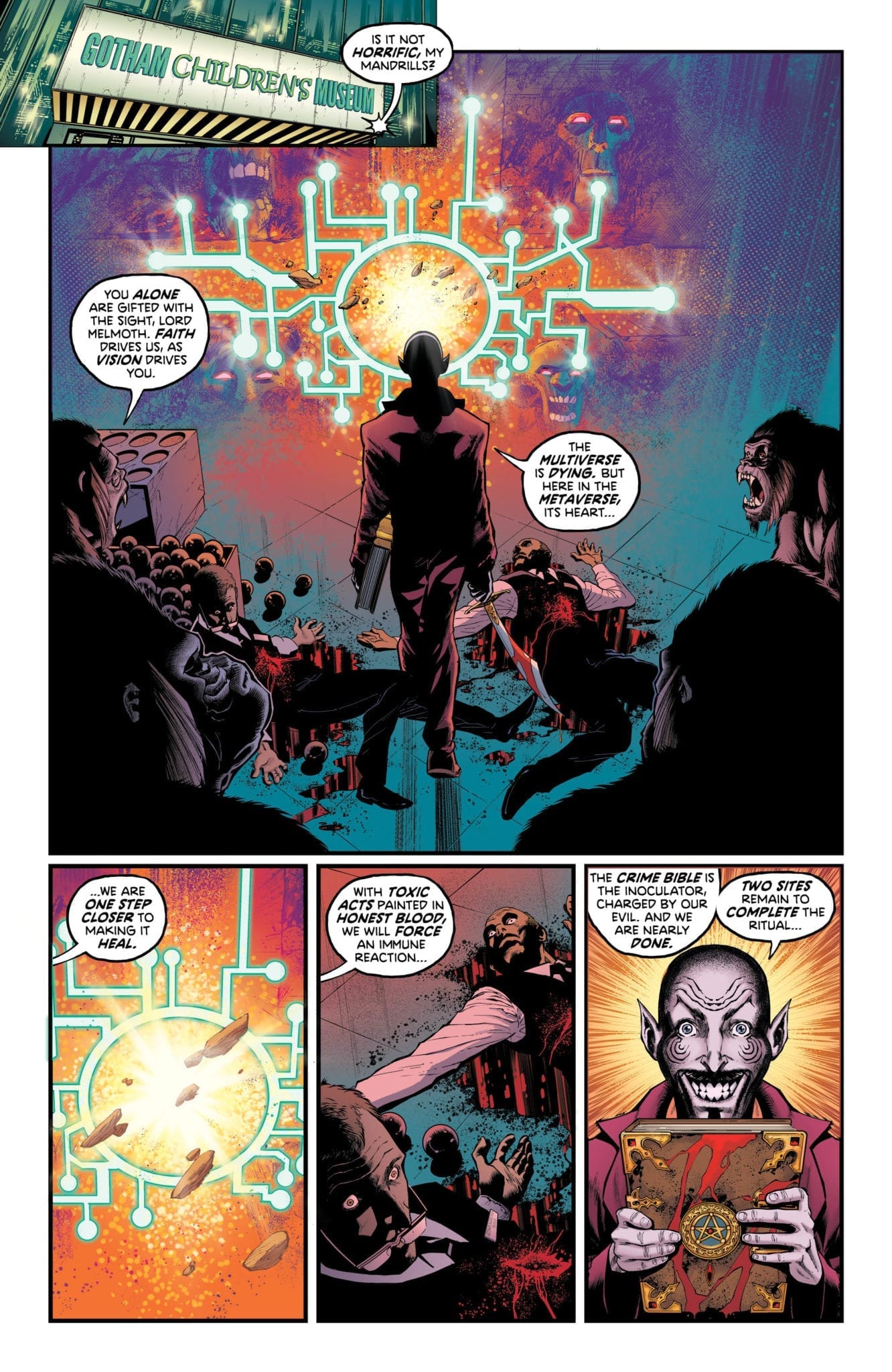 Napolitano’s lettering is both readable and incredibly unobtrusive. This is also one of those fun comics where the letterer gets to have fun lettering differently for each character. Killer Croc, Frankenstein, and Lady Clayface all get his or her individual fonts. Napolitano gives each a style that seems to fit perfectly for the character. Napolitano has Lady Clayface written in a light brown, making her seem soft-spoken. Frankenstein is both gruff and proper at once, while Killer Croc’s lettering is just gruff.

Gotham City Monsters #4 sets itself up for a great conclusion. Orlando, Nahuelpan, Mulvihill and Napolitano do not pull their punches, and events look to be shaking things up DC Universe-wide. While the tone feels like it has yet to find its footing, it makes up for that with the simple idea that storylines should have consequences. Pick it up at your local comic book shop December 11th.

GOTHAM CITY MONSTERS #4 May Be a Secret Big DealThis series is going somewhere and it might be shaking more things up than we all expect.