The “Shattered Grid” event from Boom Studios covering both Go Go Power Rangers and Mighty Morphin Power Rangers continues to leave a heavy impact on both the rangers and the readers. Can the creative team keep the energy going and the interest alive as the event continues?

With Lord Drakkon seeming to be getting the upper hand, Zordon sends a message to Power Ranger teams across dimensions in an effort to call for assistance. Who answers the call first? Why Dr. K of Power Rangers RPM and The Coinless.

This issue has more gravitas to it after reading the recent Mighty Morphin Power Rangers 2018 Annual (Note: If you really are invested in this event, it will would a very good idea to go check out the annual before the event goes any further.) Lord Drakkon seems to be conflicted or at least troubled by the actions he took in the annual. Of course, given how much death and destruction he has already caused there will be little need or chance for him to have any type of redemption. He’s become a villain who has done what many thought impossible, taking on several teams of Power Rangers all at the same time.

Writer Kyle Higgins allows for some great moments to happen between the characters in this issue. There is great dialogue between Jason and Lauren which is very captivating. Watching two red rangers from different teams talk about the difficulties of being a Power Ranger is engaging. These are the kind of moments fans always wished the series would offer to help the characters feel more human. Also, the team meeting up with the Coinless, the original rebellion force to fight Drakkon seems natural and already a part of the Power Rangers mythology even though it was introduced less than a year ago. This just goes to prove the power Higgins has a writer and how well his stories have helped to shape this new incarnation of the Power Rangers.

The color work by Walter Baiamonte helps with the multiple locations which are utilized. The command center, desert around Corinth City, and the post-apocalyptic world the coinless call home all have a different feel to them thanks to the attention paid to the colors.

The lettering by Ed Dukeshire helps with the different settings as well. Character accentuate more as information is being explained to get their point across while the few down moments come off as docile yet tense.

The “Shattered Grid” event is going strong and it doesn’t look like it will stop anytime soon. It is issues like this which make Mighty Morphin Power Rangers essential reading for both new and old fans of the franchise. 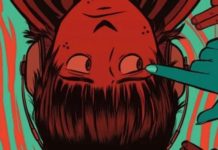 A Chaotic Beginning in FINGER GUNS #1 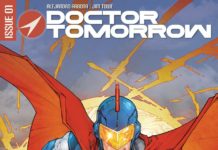 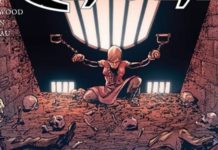 The Dark and Bloody Truth in CRONE #4