FUTURE STATE: HOUSE OF EL #1 – The Legacy Of The Man And Super

Future State: House of El #1 out on February 23 from DC Comics. Serves as a sort of finale to the Superman section of Future State, writer Phillip Kennedy Johnson depicts Superman’s legacy at its peak. Bringing forth the epic/mythic scale of the Man of Steel comes artist Scott Godlewski. All while colorist Gabe Eltaeb and letterer Troy Peteri provide further decorations.

At the heart of House of El #1 is what makes Superman an iconic piece of the DC universe. Superman, in his best depictions like American Alien, emphasizes his humanity. Within the pages of the issue, Johnson makes this humanity so notable, the alien identity of Kal-El is treated as a myth. What makes so Johnson so memorable is how he gets all of the cast to question what makes them worthy of the emblem. Especially since a family feud practically erupts over how the titular family sees Superman. Because what better way to affirm your faith in both the man and the super than questioning it all? It allows people to explore the nuances of it all. 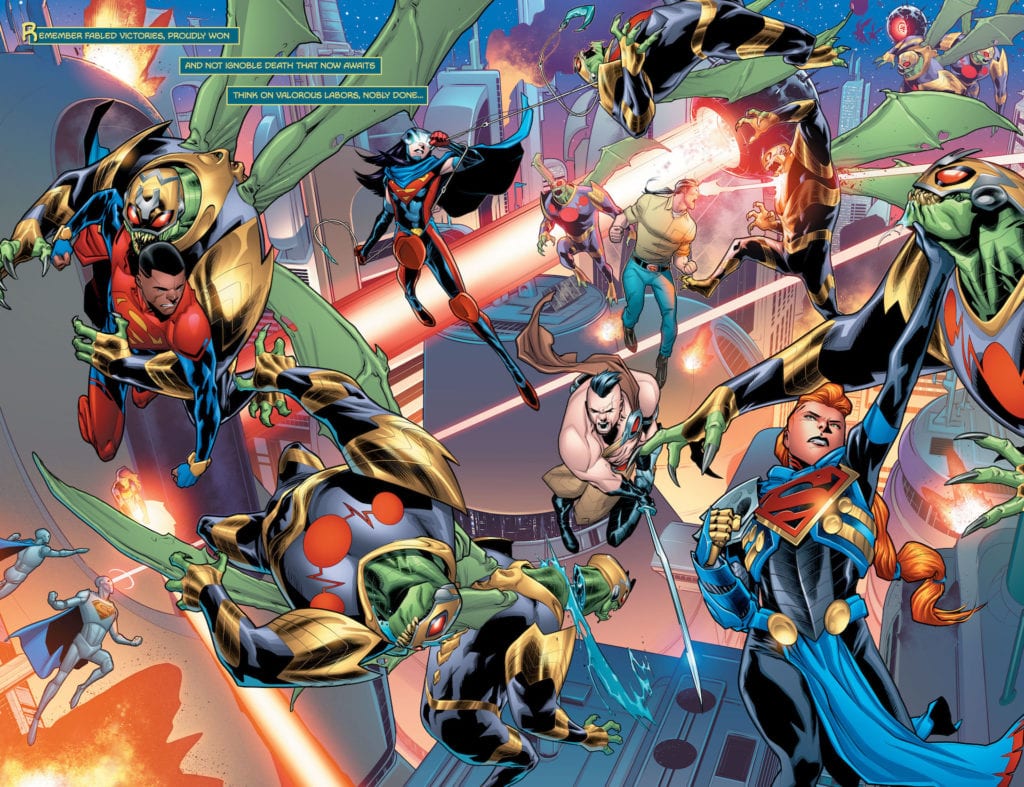 Throughout House of El #1 are several double-page spreads to show off the scale of the characters. With every El family member in action, their very presence can hold the weight of their world. When they separate, each member focuses on a single moment in all of the chaos, practically warping the page with their actions.

The costume designs certainly add to this effect. Each emblem-bearing costume is practically an extension of the original Man of Steel in some way. Brandon Kent, for example, wears regular street clothes as a tribute to Clark Kent, unlike most of his relatives.

No reference is too small, especially when Eltaeb can make the ultimate reference to Superman Red/Blue. Blue Lantern Rowan Kent and the Red King’s color-coded costumes are equal parts tribute as well as points of conflict in House of El #1. No specifics as those would be spoilers.

Finally, Peteri makes all of the lettering hold narrative weight as extensions to every action. The scenes featuring Brainiac 4 with word balloons taking up space in a panel tell a dire situation without actually seeing it. The SFX, in the meantime, are as big and loud as the actions in battle. The humming sound of the Black Racer speeding by might sound quieter in juxtaposition, but that just means she’s all the more dangerous. In all the excitement, it’s easy to lose track of danger in House of El #1.

House of El #1: The Family Who Has Everything

In this last piece of Future State for Superman, House of El #1 gives a grand finale in tribute to the Man of Steel. The best parts of Superman might be his humanity, but it’s always good to show his sensational aspects in juxtaposition. With so many characters following in his lead, you need to ask the right questions to see why. Superman’s very spirit can hold the weight of the entire universe because the emblem and costumes are points of inspiration.

The House of El depicts a future where the legacy of Superman reaches its pinnacle. The cosmic scale across the DC universe shows the power and influence the names of Superman hold. It's probably one of the few titles that genuinely tribute the Man of Steel beyond his humanity.FUTURE STATE: HOUSE OF EL #1 - The Legacy Of The Man And Super