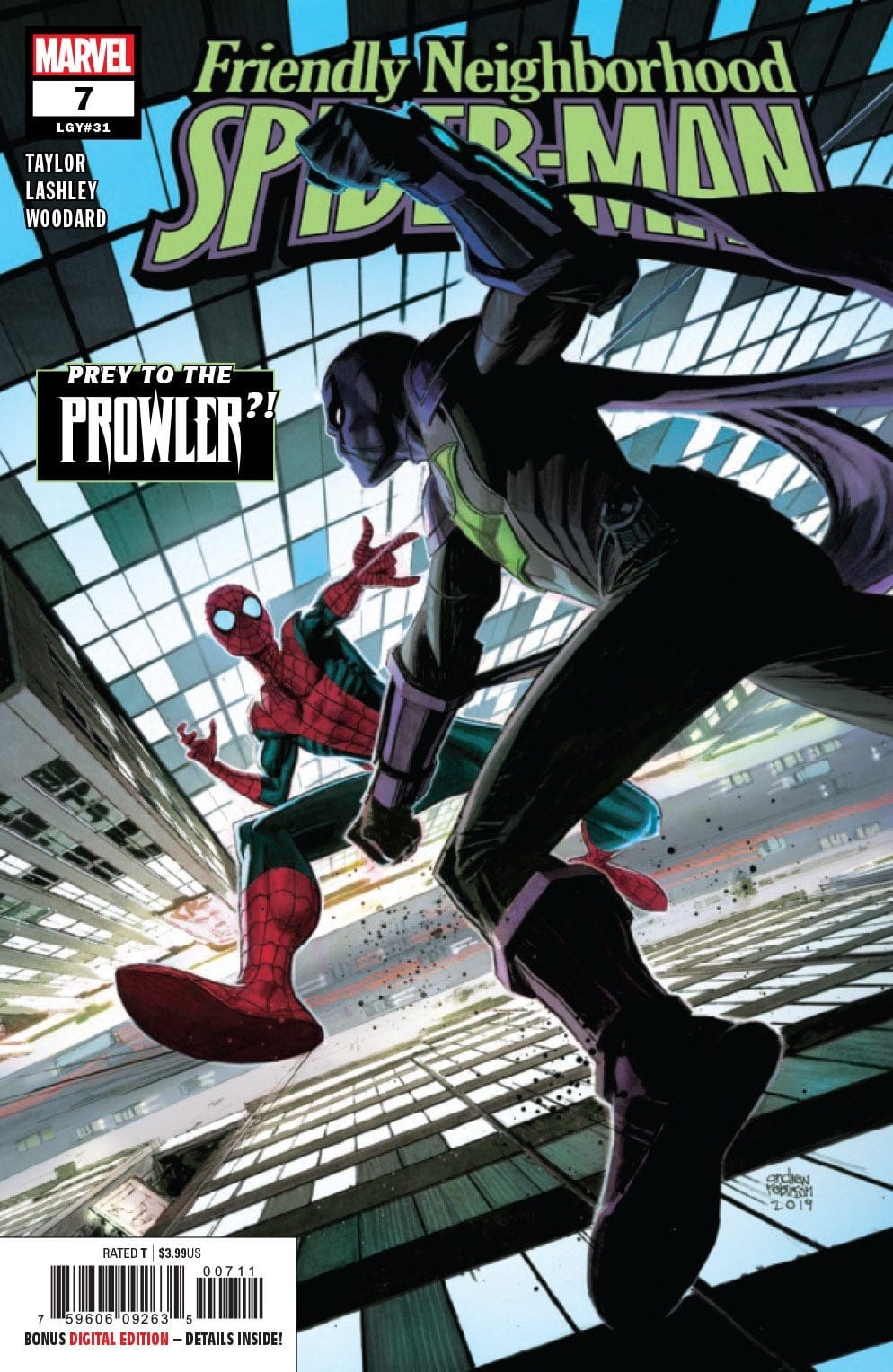 It’s a really great time for Spider-Man fans right now. There’s a couple of really strong Spidey titles coming out in addition to what we’re getting on the big screen. Tom Taylor’s Friendly Neighborhood Spider-Man acts as the perfect contrast to Nick Spencer’s Amazing Spider-Man.

Spencer’s book is a return to classic Spidey comic booking, it’s all the chaos and explosive drama that you would want from your main series. Tom Taylor Friendly Neighborhood Spider-Man is a quieter, more focused effort. ASM is pushing the major continuity forward while FNSM reminds you with every issue why you love Spider-Man in the first place.

Tom Taylor has none of the pressure that comes with the Amazing title, he doesn’t have to worry about huge arcs and epics with high profile villains. He gets to focus on everyday life Peter Parker/Spider-Man, which he most certainly excels at.

This book explores drama that could happen to anyone reading it. Aunt May’s recent health concerns, and now her lack of health coverage for them, have been a major thread thus far. It’s been a while since May was a worth being concerned about in a Spider-Man title. Taylor makes her matter again, rather than be a convenient liability for Spidey when closing out a story arc. 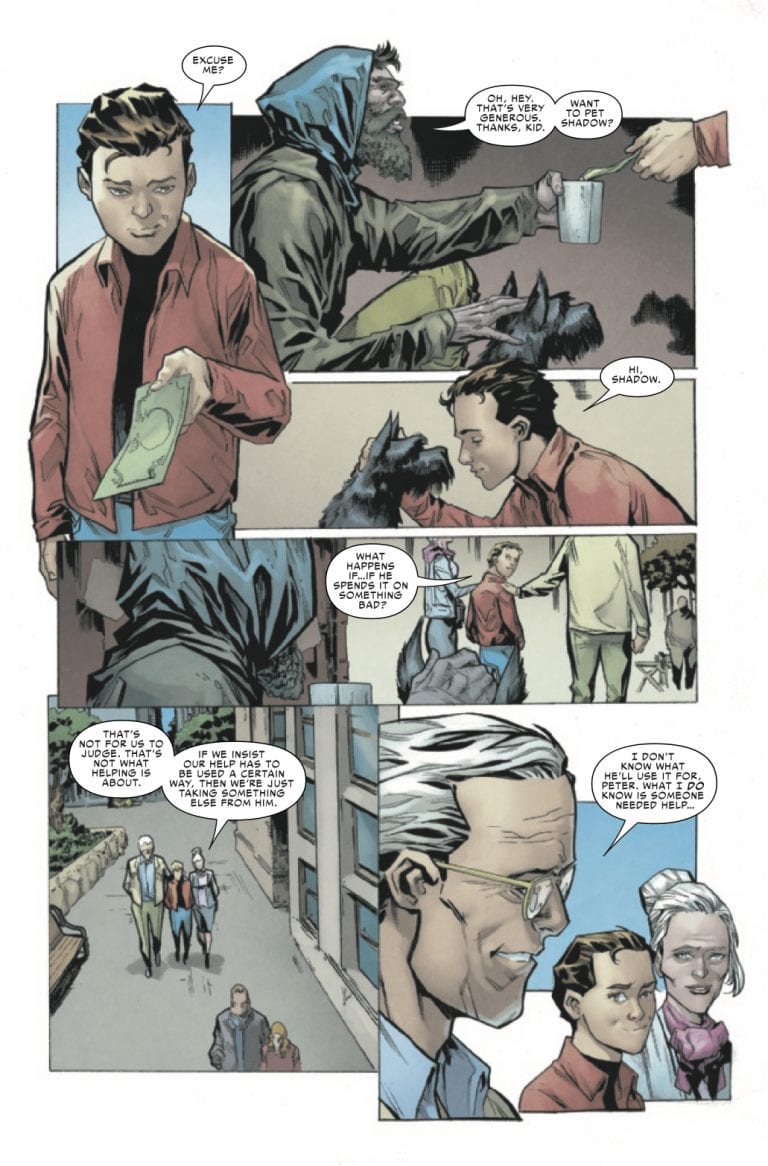 Taylor manages to craft a scene that perfectly encapsulates everything that Spidey is in just a few pages. The opening moment with Parkers (both past and present) helping out homeless people is so effective that it’s impossible not to at least come away with a smirk on your face.

The ongoing joke about how sometimes it looks like Spidey is robbing someone works both times. Boomerang’s effectiveness as comedic relief carries over from Nick Spencer’s work. Tom Taylor keeps things consistent, these characters don’t sound different under another writer.

We don’t get to the Prowler until the final few pages but Spidey asks the same question readers will–is this Hobie Brown? The longtime ally of Spider-Man was last seen in Clone Conspiracy and was very much dead. We’ll see what kind of explanation we get, but at least Taylor isn’t shy about addressing continuity elephants in the room. 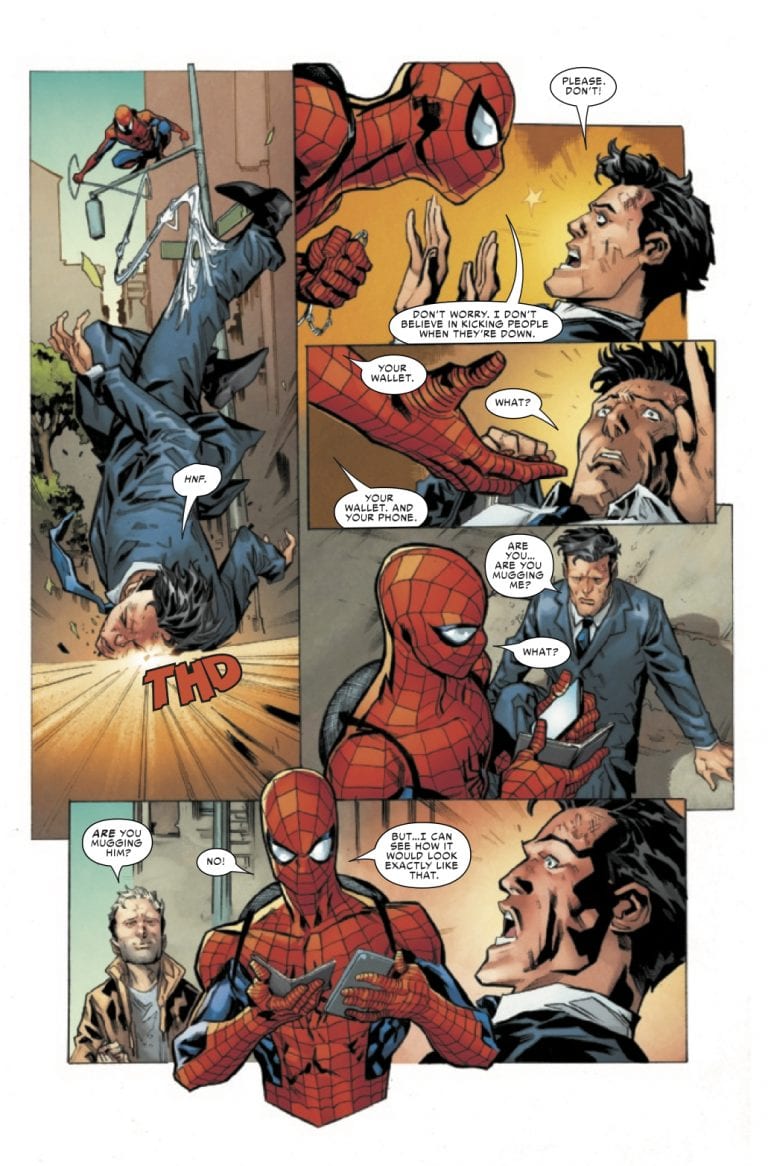 The red and blue colored “Woooo” for the police siren was a nice touch in addition to a solid effort by both colorist Nolan Woodard and letterer Travis Lanham. Woodard does a lot of mood-lighting in the background of these panels, simple and effective.

Between Amazing Spider-Man and Friendly Neighborhood Spider-Man, it’s not that one is clearly better than the other. They’re two sides of the same fantastic web-covered coin. Tom Taylor is a writer on the rise, and very deservedly so.

This series continuously takes it’s time to show it’s heart and bring an emotion out of the reader. It does so without cheap tricks or cliches, it’s simply reminding us why we actually love Spider-Man outside of the punching and costume.

Friendly Neighborhood Spider-Man #7 introduces a mystery for Spidey to solve that perfectly incorporates the wonderful supporting cast. Whether it’s a multi-issue arc or a single-issue story, Tom Taylor delivers the goods every time.