The Freedom Fighters continues to soar

Welcome to Earth X, where the Nazis have won. In America, the Nazis killed the Freedom Fighters and sent Uncle Sam running in the ’60s. This victory becomes a national holiday for decades, and the Reich stands unopposed. In the modern day, however, a new version of the Freedom Fighters make a big debut. After destroying a Nazi museum and giant robot, the team flies off, leaving pamphlets of the American Dream behind. Their plan is to have the people believe in it enough to bring Uncle Sam back. Will they succeed or will the Nazis have a plan of their own? 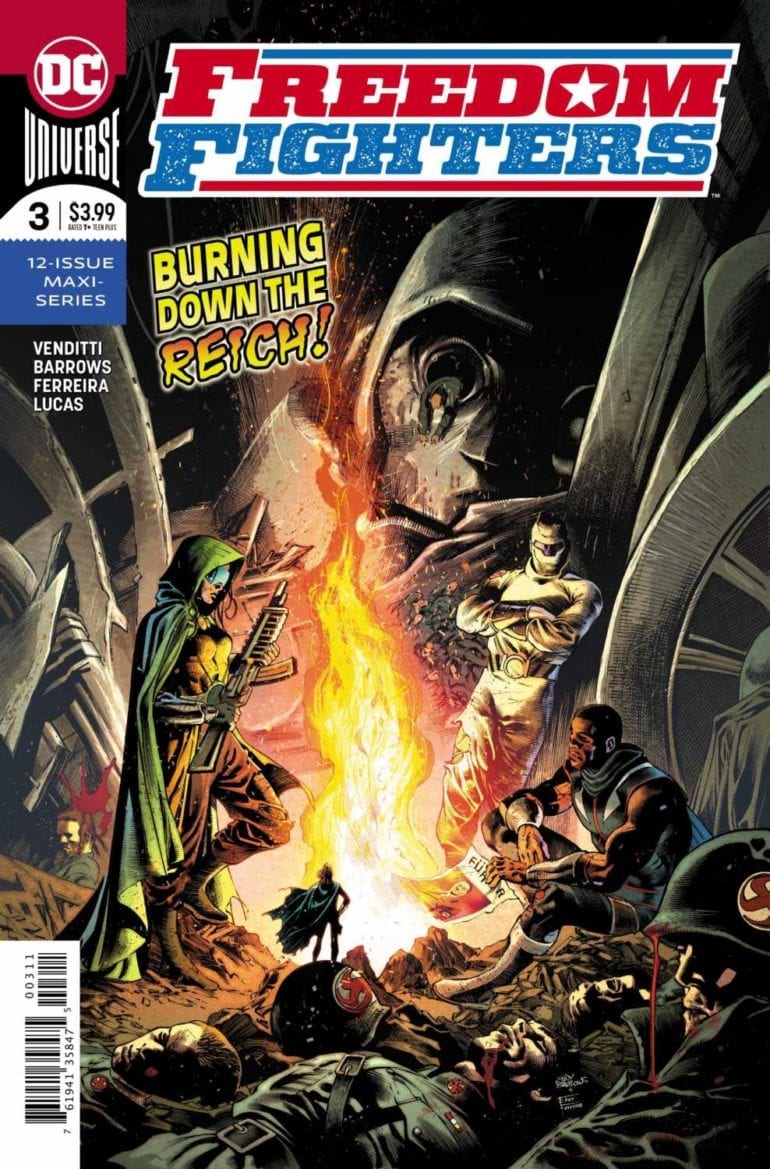 After their big return, the Freedom Fighters already have a new plan. The plan is to have Black Condor fly towards a Nazi aircraft carrier with a device that will allow the hacker, Cache, to hack into it. Before the plan begins, however, Black Condor is left hacking the cameras to observe Detroit. The African Americans there are used as factory workers, which turns out to be this Black Condor’s origin. After Phantom Lady pulls him out of his sad reminiscing, Condor goes off to complete the plan. This leads to an epic aerial battle between Black Condor and the Nazi Air Force. 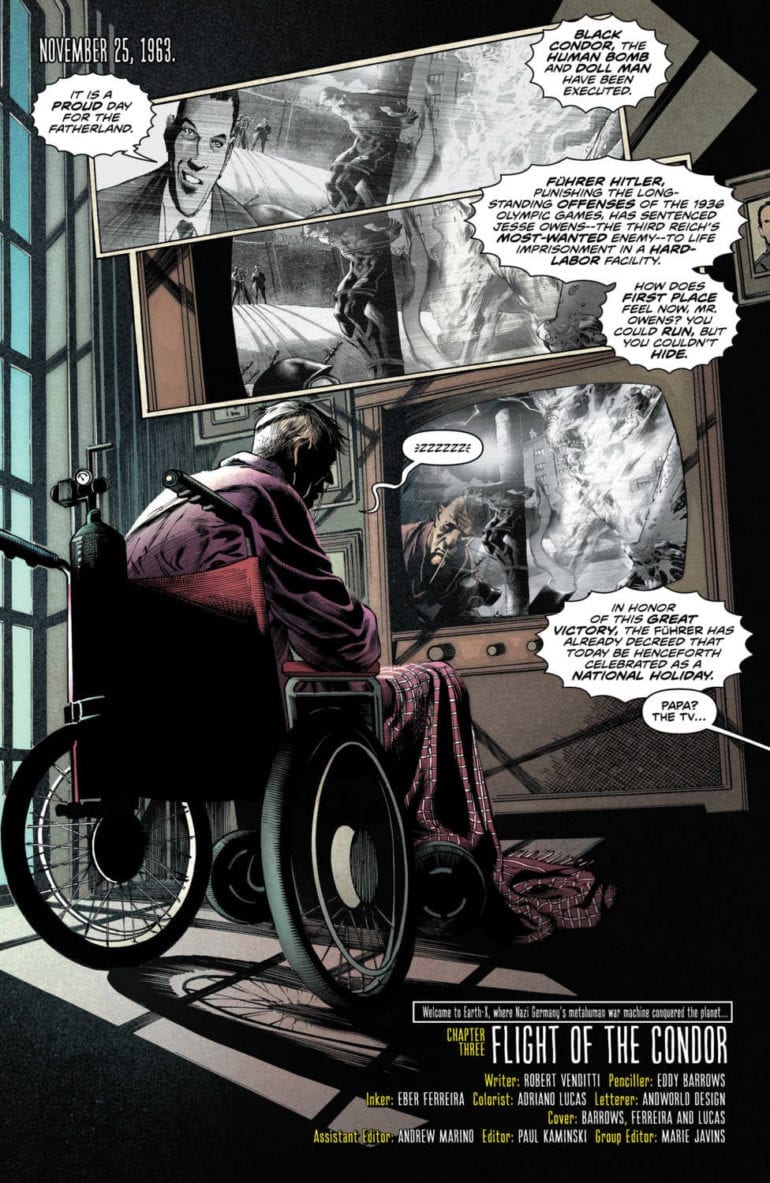 This issue has the same epic battles and cool heroes we’ve seen in the last two issues and added precisely what it needed: depth. My biggest worry going into this series is that the Freedom Fighters wouldn’t get fleshed out well. Those fears have begun to fade as we learn the background of not just Black Condor but the Phantom Lady as well. Both of their origins are very different from one another, and it makes the team feel more realistic because of it. I hope we’ll be getting more of this team background; it makes the series just that more interesting.

The art team does a fantastic job of bringing the world of the Freedom Fighters to life. Eddy Barrows’ illustrations are able to bring epic action and generally creepy imagery. The origin of Black Condor is something that has burnt itself into my mind because of the art. The colorwork and inks take the book to the next level. The darker colors and inks make this book feel like a war epic. Add that to the bright colors of the American flag, and we have one great looking book. 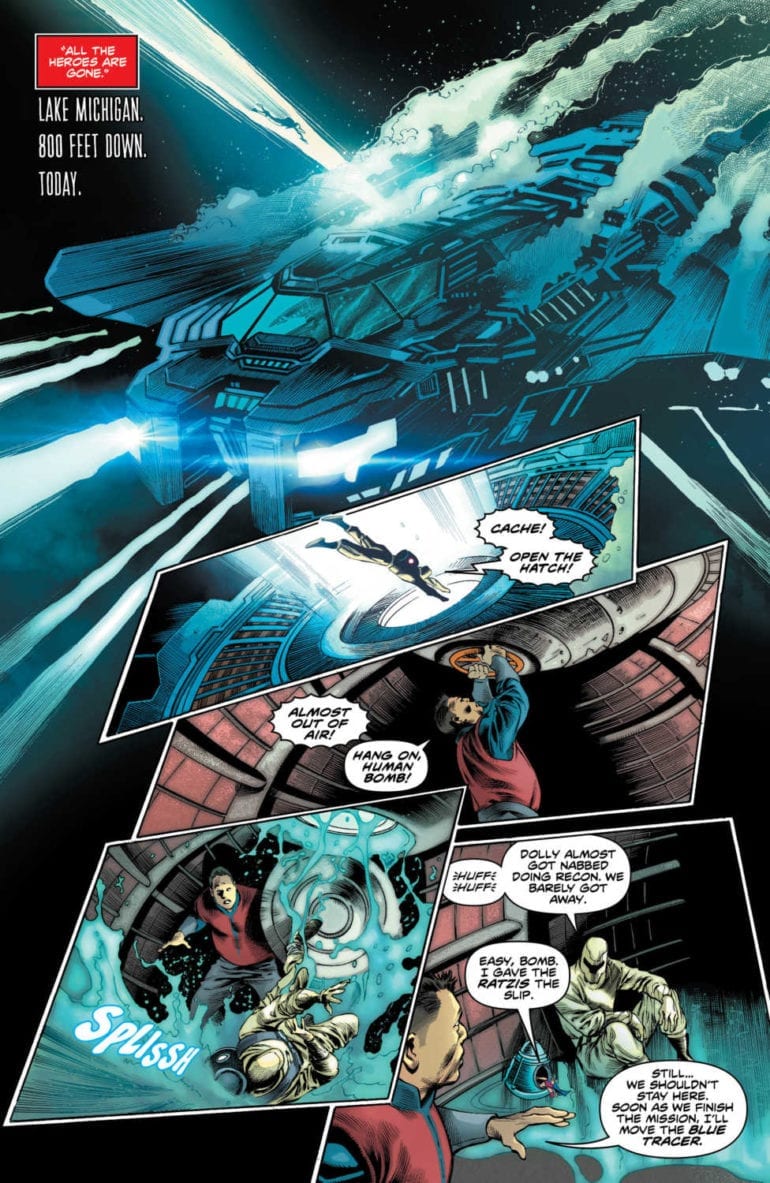 This book is excellent. The story has finally gotten that depth it needs to balance the kickass action. The art is top notch and fits the world entirely. The Freedom Fighters continues to surprise me, and I highly recommend it.

Freedom Fighters continues to be a kick-ass maxi-series.Review: FREEDOM FIGHTERS #3 Sees the Origin of Black Condor