Review: The Trickster Plays his Greatest Trick in THE FLASH #69

The Flash faces off against The Trickster!

The Trickster has been a bit of a background character for a long time. While the Flash sees him as a threat, many readers see him as a discount Joker. In this storyline, however, he’s grown into his own being. As all of Central City is under his happiness mind control, Trickster prepares for his greatest trick. He takes revenge on the brutal Warden Wolfe and even gains the upper hand on the Flash. Barry teams up with Commander Cold to try and beat the colorful Rogue, but even then James Jesse defeated him. Trickster ended the last issue with his darkest trick: cutting off the Flash’s legs. How can the fastest man alive save the city without his legs?! 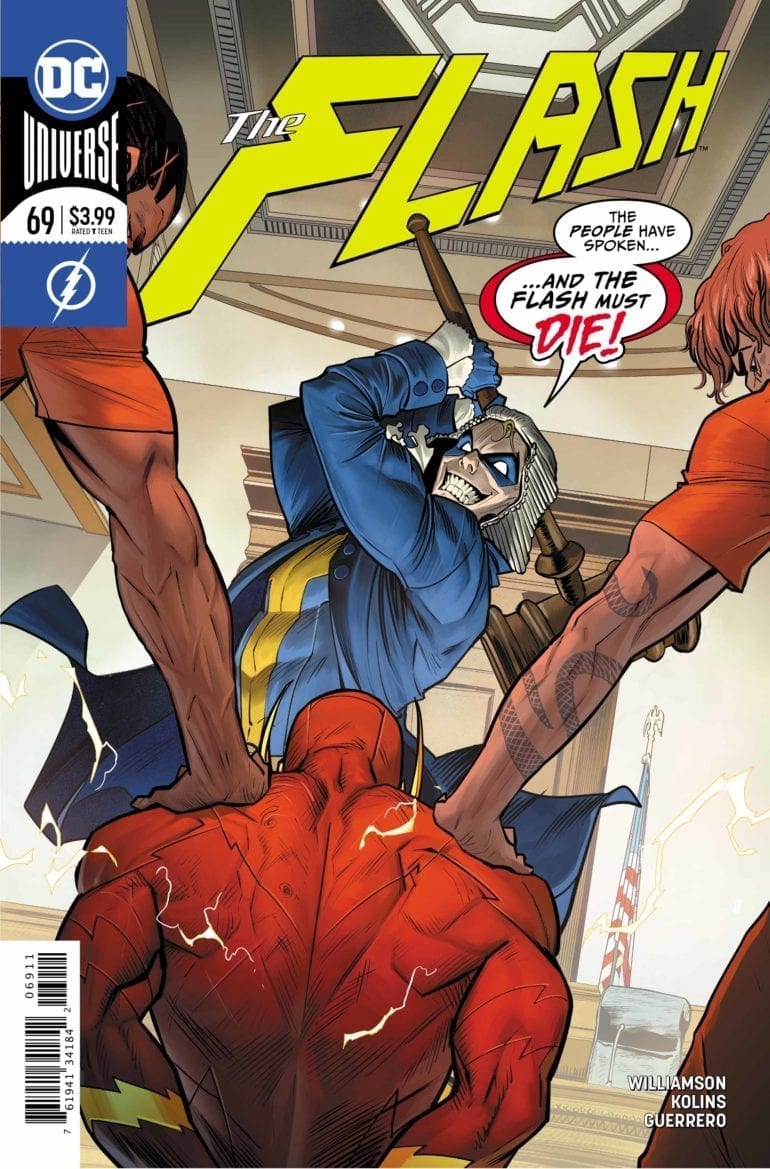 While Central City is distracted by their happiness, The Trickster orders the Rogues to rob every bank. While they get to work, James begins recording a video confession from Warden Wolfe about him erasing his files. In the holding area, Flash tries to get a grasp around his missing legs. Commander Cold, still under Trickster’s happiness mind control, deduces that all of his tricks are tied to the Sage Force. He then suggests they use their minds to break through the control. Cold is able to use his anger to break through the happiness and Flash uses his happiness to see through his trick of losing his legs. With the tricks undone, the pair get to work to stop the Trickster. 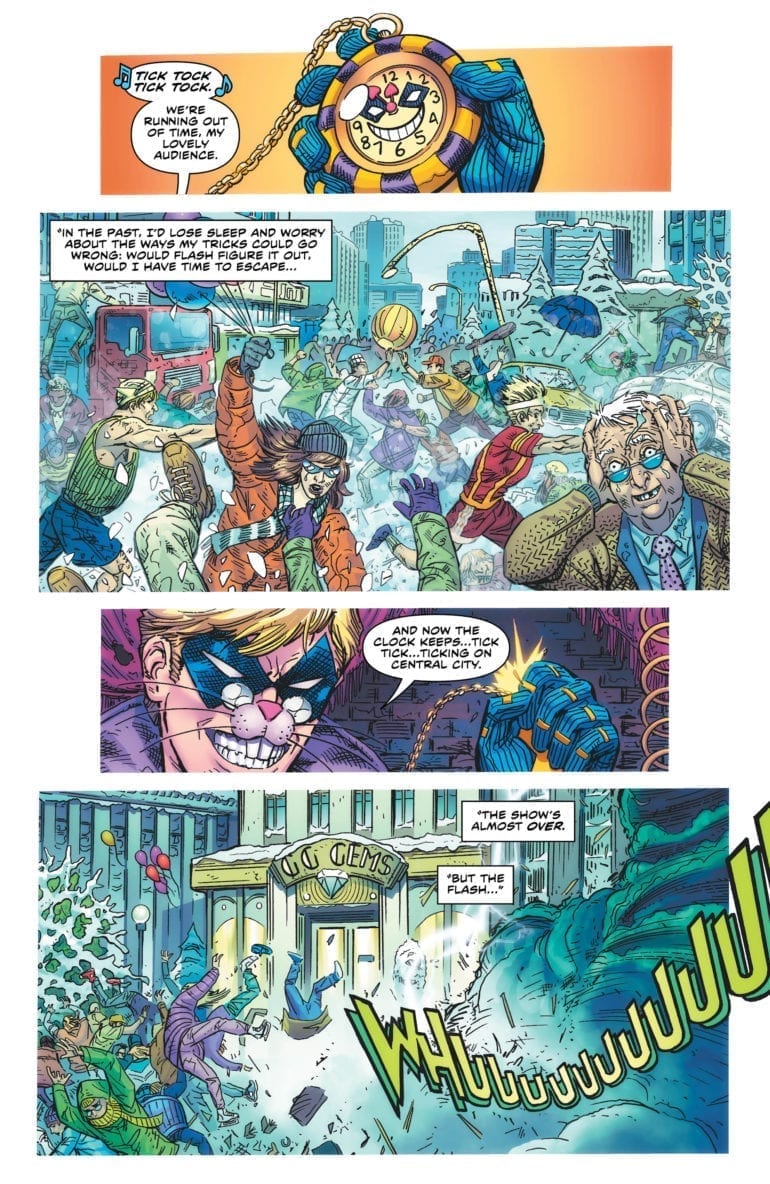 It’s nice to have a storyline that isn’t tied to a bigger story from time to time. While the Sage Force is involved, this story as a whole can be read without any real connection to the rest of the series. The finale here proved that perfectly. With little regard to the Force Quest storyline, we get a finale with great action and character moments. The best comes when Flash sees through his Leg trick. As he mentioned throughout the arc, he’s been carrying a lot recently. With his acceptance, Barry had regained his hope and happiness. It was a nice change from what he had been, and I can’t wait for the next present-day arc.

While I did compliment Kolins’ style last issue for fitting the dark turn of the Trickster, I’m still not a huge fan of it. Some parts stand out, such as Trickster attempting to murder his parents, but most of the comic look silly. A prime example of this was Flash using Cold’s tech, where he had these random blue disks covering his body. The only tech we’ve seen Cold use for the safe force was his glasses, which Barry has. So what were the disks for? We never get an answer. I will say that the colorwork is well done, with bright colors complimenting the style. This art might be some readers’ cup of tea, but it’s certainly not this one’s. 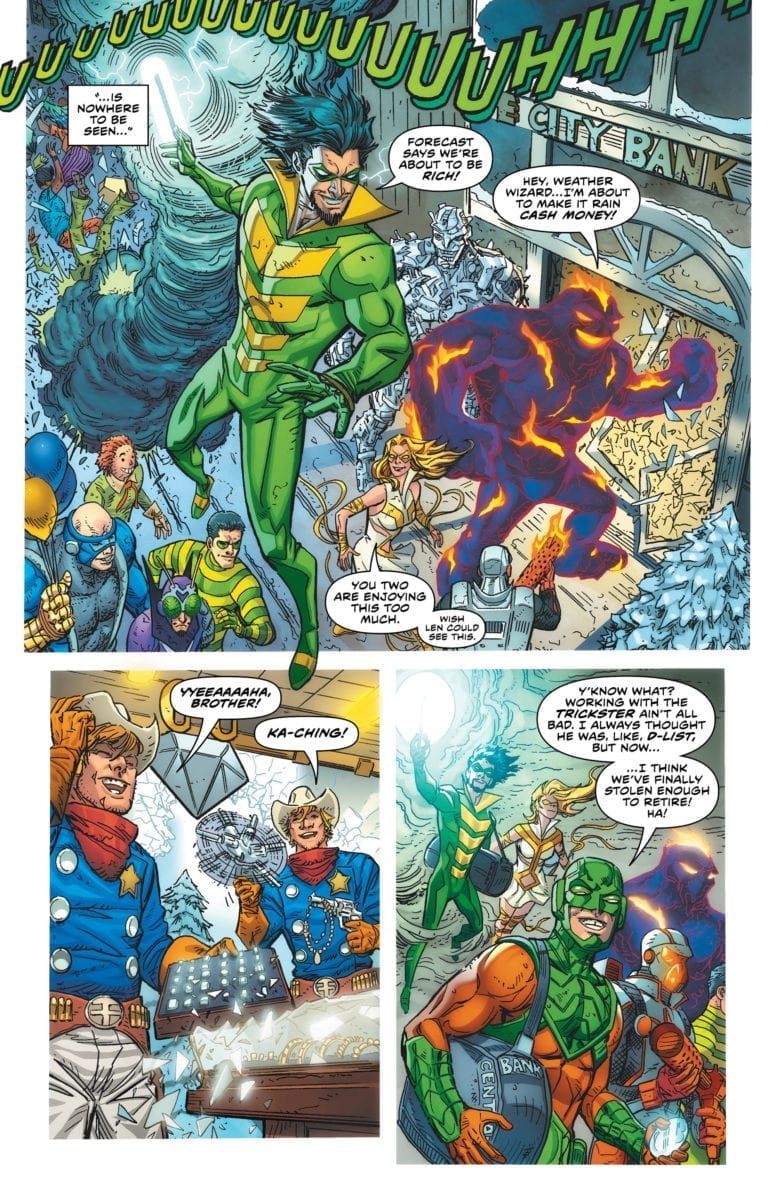 Despite my gripes with the art, this is still a great conclusion to an excellent Flash arc. There are great action and character moments, as well as pay off for arcs that have been building for a while. We’ll need to wait for a while to see the ramifications in the present, but this issue sends off this arc on the highest note.