Review: Barry and Bruce Clash in THE FLASH #65

The Flash and Batman Learn The Price

The Flash is carrying a ton of emotions right now. Wally’s death at Sanctuary weighs heavily on not just his but Batman’s mind. The pair team up after Gotham Girl went on a rampage in the Flash Museum. They follow her to a South American island, where someone promised to clone her brother Gotham. Along with the cloning, Gotham Girl is given super venom, allowing her to be stronger and faster than ever. Amidst the investigation, Flash learns that Gotham Girl was sent to Sanctuary before her snapping. This causes a rift between the detectives as they hurry off to stop her second attack on Central City. Will the heroes stop her in time? 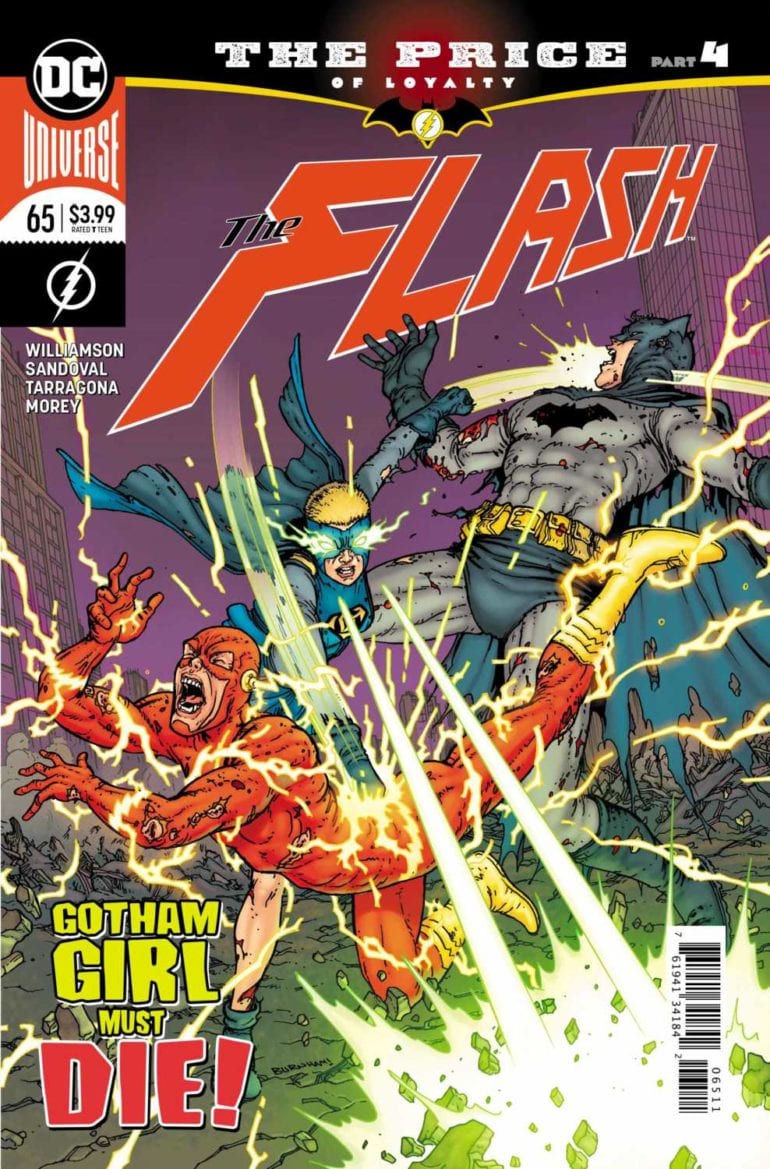 The Flash quickly saves civilians as Batman tries to break through to Gotham Girl. Gotham Girl, still believing what she does is heroic, continues to use up her powers. When Bruce fails to convince her, Barry steps up, saying he just wants to talk. This slows the superheroine enough to speak, only for the super venom within her to stop her heart. After she falls to the ground, Batman struggles to revive her. The Flash, unwilling to lose another young hero like Wally, steps in to revive her. After several chest compressions, and a sweet Speed Force defibrillating, he’s able to revive her. Unfortunately, the super venom is in her system, so the pair take her to the Batcave to detox. Once there, Batman and Flash talk about the supposed price of being a superhero. 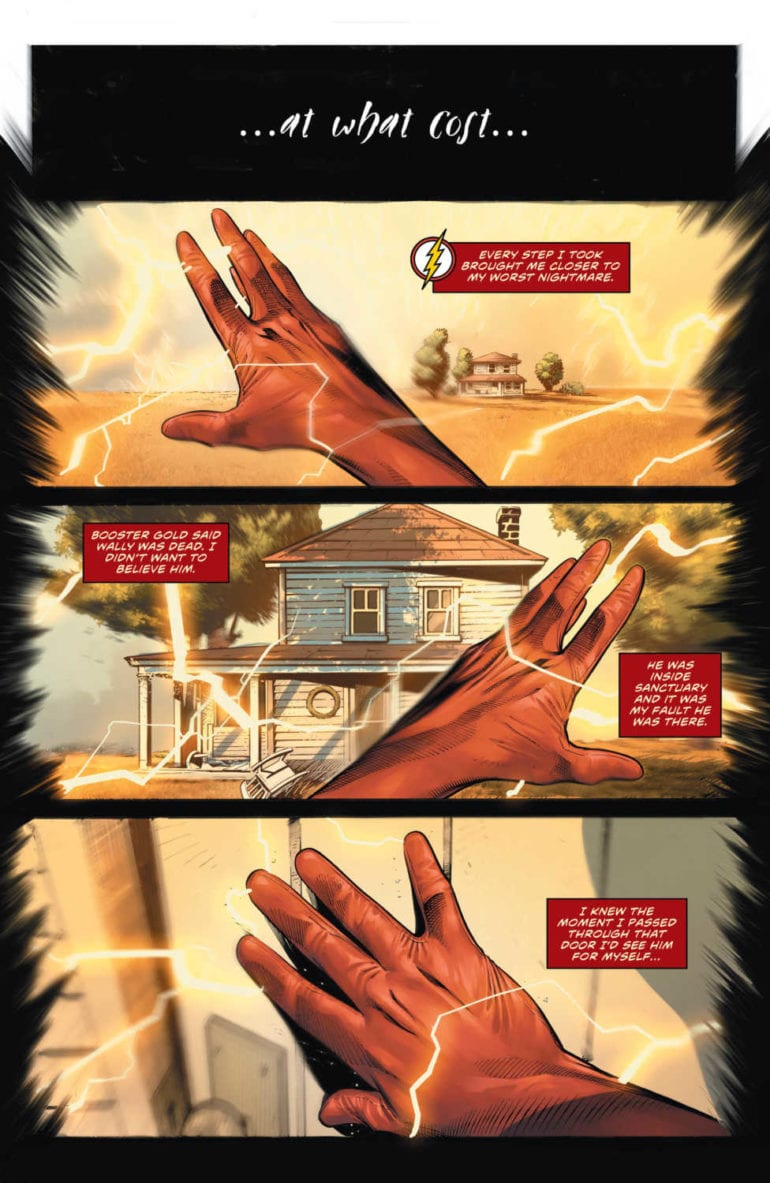 The action sequences are okay, but the real gold is the emotional moments in the issue. It opens with Barry remembering how he raced to Sanctuary, hoping what he heard wasn’t true. It’s these moments of desperation that make the issue feel more human in a sense. You want Flash to have this victory.

The heaviest moment in the whole arc is the talk on the price of being a superhero. It’s a verbal boxing match between both of the heroes. While Batman believes that the sacrifices heroes make are for a noble cause, Flash thinks that it’s just too much. Considering where he comes from, as well as the character’s publication history, I agree with Barry. A dead parent is a commonality amongst heroes, but Flash has lost partners, loves, memories, and broke time itself. Despite his optimism, Barry has a more tragic background than Batman. It makes me appreciate the character a whole lot more. 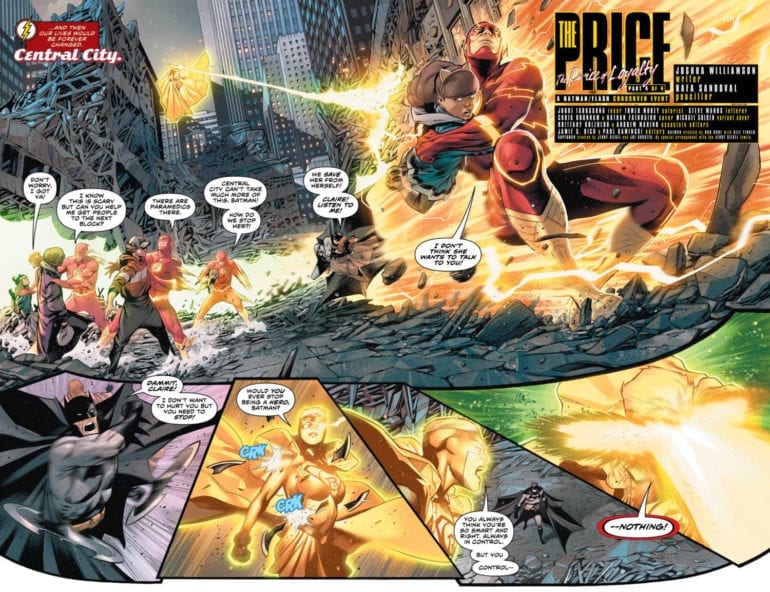 The art team did a fantastic job bringing this crossover to a close. The illustrations were grounded enough to maintain the emotional weight while fantastic enough to be entertaining. It goes hand in hand with the phenomenal colorwork. Together it makes every panel emotion-filled, and it helps the story immensely. Love or hate the story; I think anyone would agree the art is top notch.

While I had issues with the previous installment, this issue was able to end the story damn near perfectly. Flash has been changed by the events of Heroes in Crisis, and this story shows it perfectly. The argument between Flash and Batman makes the issue amazing, with the art matching the dramatic tone. Some might be a bit disappointed by the real lack of action, but I feel that’s what makes it stronger. If you get a chance, pick up this book and see if the price of being a hero is too high.

The Price arc comes to a conclusion with The Flash and Batman at each other's throats.Review: Barry and Bruce Clash in THE FLASH #65