Review: THE FLASH #64 Continues The Price of Innocence arc

The Flash and Batman corner their culprit and learn a dark truth.

It’s a new year, and that means a new Flash Batman crossover. In the wake of Heroes in Crisis, Batman is feeling guilty over the deaths. Everywhere he looks, he is reminded of Wally West, which comes to a head when there’s an attack on the Flash Museum. Barry can run to save everyone, including the caped crusader. They decide to team up to face the person who attacked the museum. The culprit turns out to be none other than Gotham Girl, a former up and coming hero. She appears to be trying to bring back her brother, Gotham, as well as get vengeance on Batman. Will the Flash and Batman be able to stop her before someone gets killed? 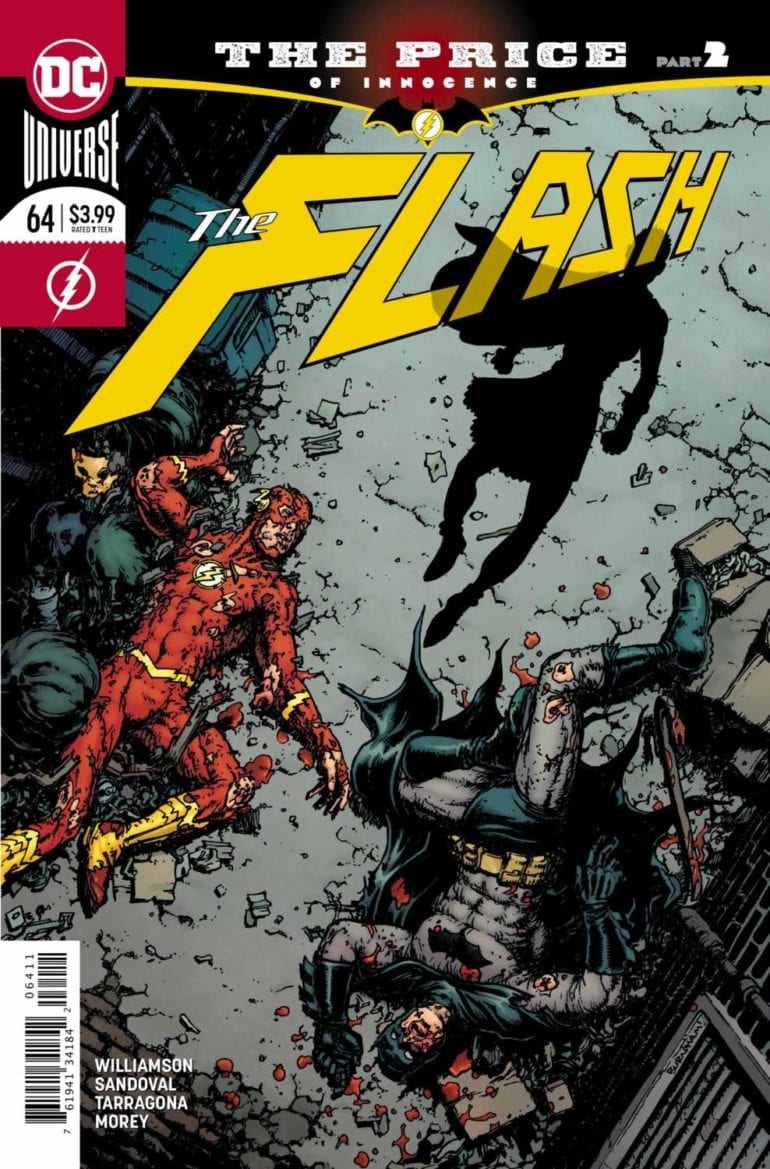 After Batman and Flash thoroughly investigate the crime scene, the pair figure out Gotham Girl is on an island in South America. The pair head over as Gotham Girl meets with her benefactor, who is supplying her with the chemicals needed to bring her brother back. When Flash and Batman arrive, they take their sweet time heading inside, indulging in small talk. When they get inside, however, they realize how far gone Gotham Girl has become. 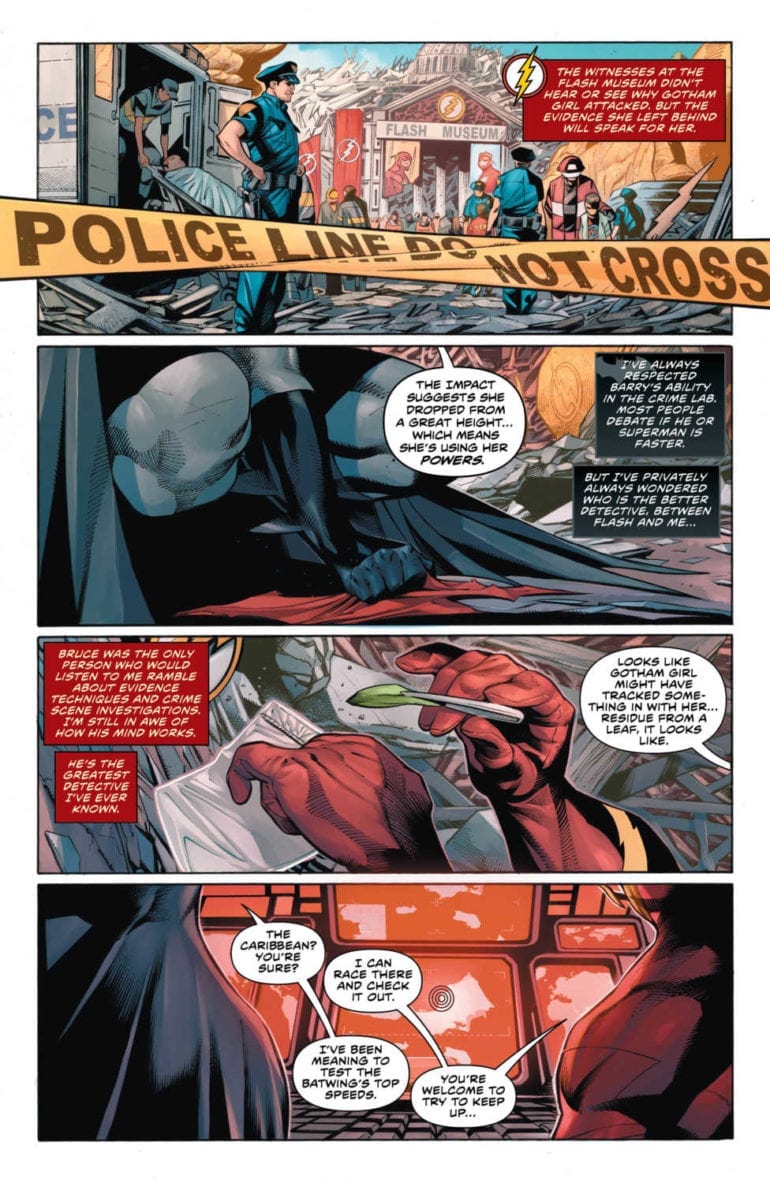 This wasn’t an exciting issue by any means. When the biggest non-spoiler highlight is they have small talk, there’s a problem. You have two of the worlds greatest detectives and all around butt-kickers, and we have them just talking about their lives. The last time we had a crossover between Flash and Batman, the second issue had actual detective work and ended on a shocking cliffhanger. This has neither, and the book suffers for it.

There is one part that does stand out amongst the rest of the story. When Batman and Flash find Gotham Girl’s room, Flash is reminded of how Wally made his costume. It’s a heartbreaking moment that made me choke up. 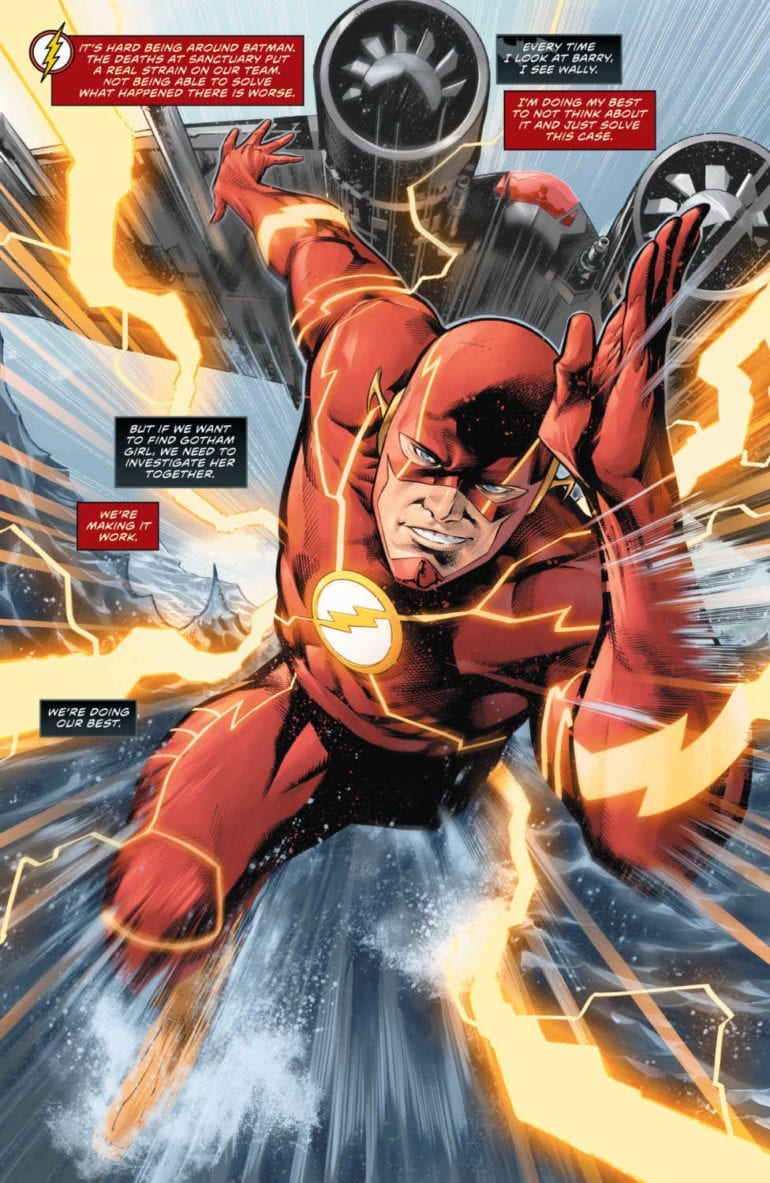 While I may have an issue with the story, the art almost makes up for it. Rafa Sandoval takes up illustrating the issue, and it looks fantastic. Every character is full of emotion, making the scenes like Flash remembering Wally tug on your heartstrings. The colorwork was on point as well, with each panel maintaining the right level of creepiness and vibrancy due to Flash and his powers. It’s fantastic art that saves the book from being a failure.

I was let down by this issue. It was just generally dull, despite having a few moments of emotional weight from the Heroes in Crisis story. The art team can give us a pretty book to look at, but nothing exciting happens. We still have two issues left, so here’s hoping it shapes up.

While the art is fantastic, the story itself has grown dull in this chapter.Review: THE FLASH #64 Continues The Price of Innocence arc