With its second printing coming out on October 28th, Dry Foot #1 is the first issue of a crime/action miniseries from Mad Cave Studios. Set in Miami during the 1980s, we follow four teens who decide to steal money from the infamous serial killer, El Viejo, and his cruel gang in order to escape the drugs and violence of the city.

One thing writer Jarred Luján does well in this first issue is not wasting his readers’ time. By page 5, Luján introduces us to this miniseries’ main characters, the main villain, and the heroes’ motivation. Using caption boxes and giving each character a distinct feature, we get familiar with the characters quickly and sympathize with them. The issue also gives us important glimpses into the personal lives of each of the main characters, Diego, Marianna, Fabian, and Angel, and their relationships with each other and their relationship with their families, so by the end of the issue, you can’t help but get a sense you’re reading about real human beings with real feelings and real relationships. You can’t help but feel like you’re now a part of the gang.

The dialogue flows nicely. The interactions between the main characters are enjoyable, but what I’m most excited about is the use of Hispanic culture in the story Luján is trying to tell. An element not seen often enough in comics, especially mainstream comics.

The only downside to this issue was the rather anticlimactic ending. We get no real sense of danger or threat by the end; No huge reveal. But, the issue is enjoyable enough to look past this small flaw. 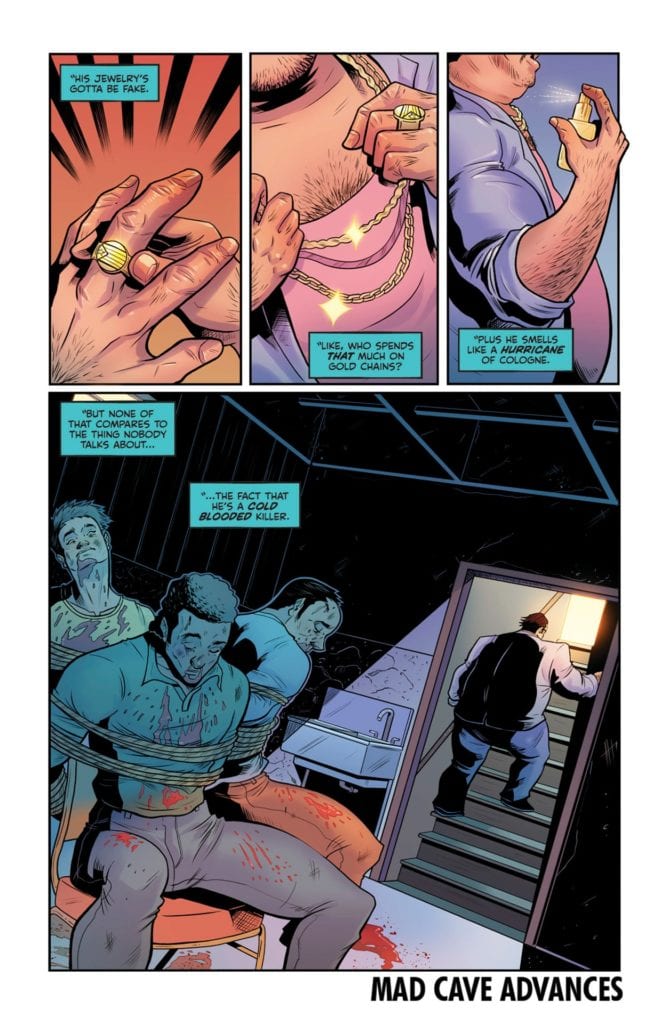 The pencils and inks by artist Orlando Caicedo are mesmerizing. True, the way he draws faces is unique, and it might take the occasional reader some time to get used to, but the vibrant, fun art style complements the YA-ish vibe of the story beautifully. The layouts are simple in the best way possible, and the faces are consistent throughout the entire comic. The acting in this comic does the heavy lifting, making us laugh a few times just by seeing how the main characters interact with one another, and especially, the fight sequence in the middle looks great because it looks like a real fight.

Colorist Warnia K. Sahadewa did a fantastic job with the warm tone colors that complement the story almost perfectly. It gives us an idea of where the story’s taking place; you can actually feel the warmth of Miami. It gives the comic life. Additionally, the choice of using unsaturated colors tells us that the story doesn’t happen in the present. It feels like you’re looking at an old photo from the ’80s.

When the comic reaches its darker parts, Sahadewa pulls back on the brightness and lightness from the rest of the story and sets the grim mood well. Also, Sahadewa uses a gradient effect in his backgrounds, giving them more dimension instead of doing a basic flat coloring. 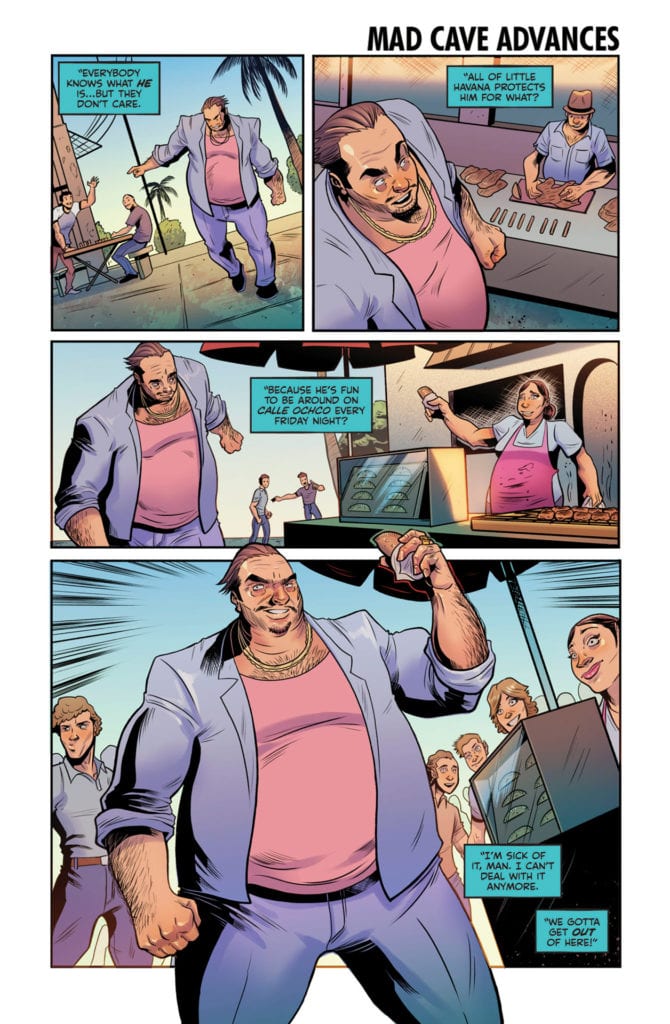 Letterer Justin Birch definitely knows what he’s doing. The sound effects are efficient, not calling too much attention to themselves. Birch gave the balloons of each character a different color, which is a smart choice. The decisions taken by Birch definitely make the reading experience a lot less confusing. Professional lettering all around.

Dry Foot #1 serves as an effective and engaging introduction to the main characters of this miniseries. Highly recommended for fans of comedic crime stories like the Bad Boys films, the Ocean’s franchise, and Martin McDonagh’s earlier films.

Dry Foot #1 serves as an effective and engaging introduction to the main characters of this miniseries. Highly recommended for fans of comedic crime stories like the Bad Boys films, the Ocean's franchise, and Martin McDonagh's earlier films.DRY FOOT #1 - Great Introduction To A Fun Crime Comic