Cullen Bunn is a master of horror in comics, and it would only make sense that Valiant Entertainment would tap him to write the new Shadowman book coming out in April. Monkeys Fighting Robots got a chance to chat with him about the new series.

SHADOWMAN #1 from Valiant Entertainment hits your local comic book shop on April 28, with a pre-order deadline of April 5. The book is written by Bunn, with art by Jon Davis-Hunt, colors by Jordie Bellaire, and you will read Clayton Cowles’ letter work.

About SHADOWMAN #1:
From the bestselling master of horror Cullen Bunn and bone-chilling artist, Jon Davis-Hunt comes a shocking supernatural odyssey. Jack Boniface is SHADOWMAN, a powerful protector who keeps humanity safe from the demons that claw at the fabric of our reality. The forces of darkness are awakening and they are hungry for life. Will Shadowman be able to save us all, or will the darkness devour the world as we know it?

MFR: One year ago, the world was shut down by the pandemic. How’s it feel to be doing the press rounds for Shadowman #1?

CULLEN: Thank you! I’m thrilled to be talking about this book in more detail! Back when we announced the title, I talked a bit about it, but those conversations fizzled as the pandemic took hold on the world. So… yes! So happy to be talking about it again. Even more happy that readers will finally be able to get their hands on it!

MFR: For new readers, what are the core elements that make up Shadowman (aka Jack Boniface)?

CULLEN: Jack is a hero who draws power from a Shadow Loa that is bound to his soul. The Shadow Loa makes him strong. It makes him fast. It deadens his sense of fear. And it gives him some control over shadows themselves. He is tasked with protecting our world from the Deadside, the flipside dimension where all dead things go. He is a normal guy who just wants to play his saxophone in local clubs… but instead he has to punch demons. 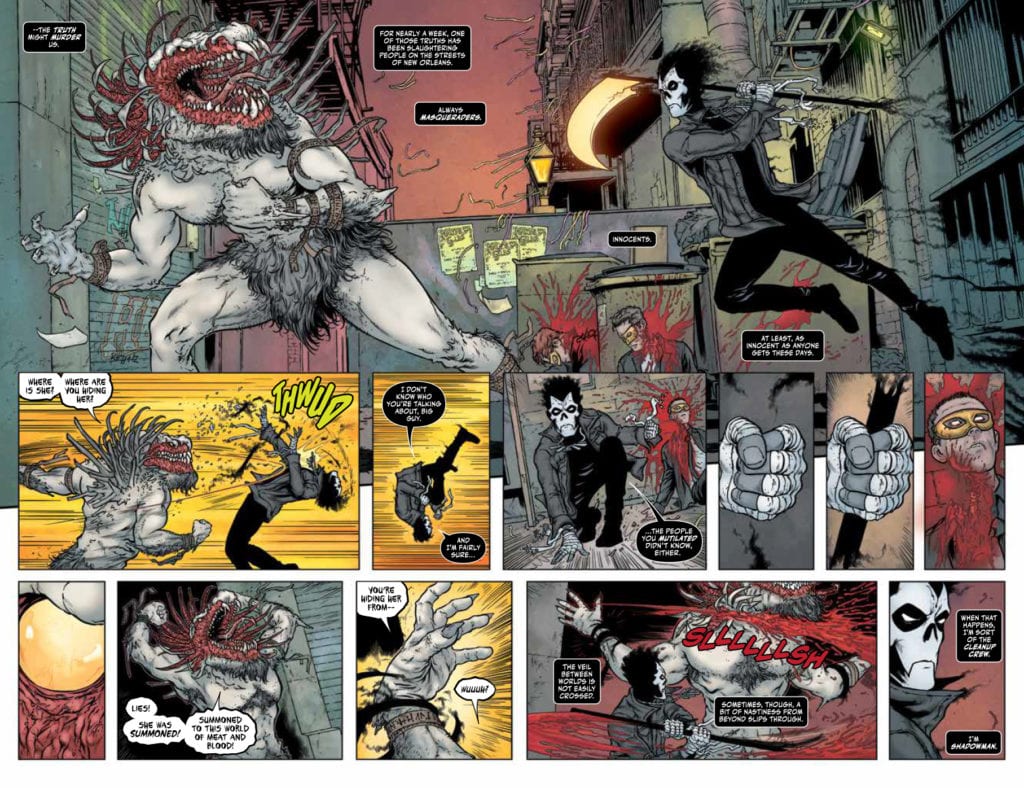 MFR: Page 2 and 3 are a splash-page with 12 panels. Can you walk us through what you were trying to accomplish with these two pages?

CULLEN: I wanted to show off Shadowman’s lot in life… duking it out with monsters… and give a hint of some of his new powers… After the heaviness of Page 1, I thought we needed to see action. At the same time, though, I never wanted to let up on the creepiness factor.

MFR: When I read a comic book, I give the characters voices. I had a hard time finding a good voice for The King of Death; what voice did you give him?

CULLEN: Hmm. I often speak in the voices of the characters when I write! I don’t have an actor’s voice in mind for Baron Samedi. Something a little scratchy, raspy, full of mirth. Starscream from Transformers if he was super charming and funny.

MFR: With a book like Shadowman, you have the chance to create insane monsters. Did you and artist Jon Davis-Hunt have a monster brainstorm session, if not, how did you build collaborative chemistry?

CULLEN: We didn’t have a monster brainstorming session before starting the book. I will, however, now be adding “monster brainstorming session” to the planning stage of every title I do. So… in my scripts, I tend to write enough description to give Jon a direction to go, but not so much that I stifle his creativity. It’s much more important to capture the essence of the monster than an exact picture I have in my head. And Jon goes forth and designs the craziest beasts you’ve ever seen! If he has questions or suggestions to discuss, he does, but often I see them for the first time on the page, and I love it! That goes a long way to build chemistry—the excitement to see what your collaborator will do next!

@fuzzypress – How does this Shadowman differ from the 90s version?

CULLEN: I think the biggest changes will be in terms of tone and mood and pacing. Yes, this version of the character has a few different abilities, which will be a bit different, and he’ll be jumping around the world, but I think this book simply feels different from what you saw in the 90s. It’s still a superhero book, but it definitely goes to some dark places.

@Mozz81 – Two things I want to know. I get it’s a fresh start, but will we see characters from the previous runs (Alyssa, Darque), and are we in for (hopefully) many arcs?

CULLEN: You won’t see many characters from previous runs in the initial couple of arcs. But I’m absolutely planning on weaving them in as the book goes on. As for how many arcs… it all depends on how readers respond to the book. I’d love to write these stories for a long while.

@AMaverickComic1 – How many Valiant heroes will guest star? Any ideas to bring Shadowman a sidekick? Is the big bad someone you came up with, or is he or she from a different mythology? Who do you consider the big three in Valiant? Any plans for a teen unity team? Who would you pick on the team if you could?

CULLEN: Ok… Deep breath! There won’t be a lot of guest stars initially, but I certainly want to see some. Shadowman kind of has a sidekick in this story—Baron Samedi! The big bad is a new character I developed. This character is tied closely to Shadowman. Big three for Valiant would be Punk Mambo, Roku, and Shadowman. Kidding! Maybe X-O, Bloodshot, and Shadowman. No plans for a teen team from me… though if Valiant wants to talk… I’m around. My new Unity team? Punk Mambo, Roku, Shadowman. Kidding!

MFR: Cullen, thank you for your time, and best of luck with SHADOWMAN!

CULLEN: Thanks for talking with me! I hope people have a blast with this book!

FYI – Let your local comic book store know if you want a copy of SHADOWMAN #1 this week. 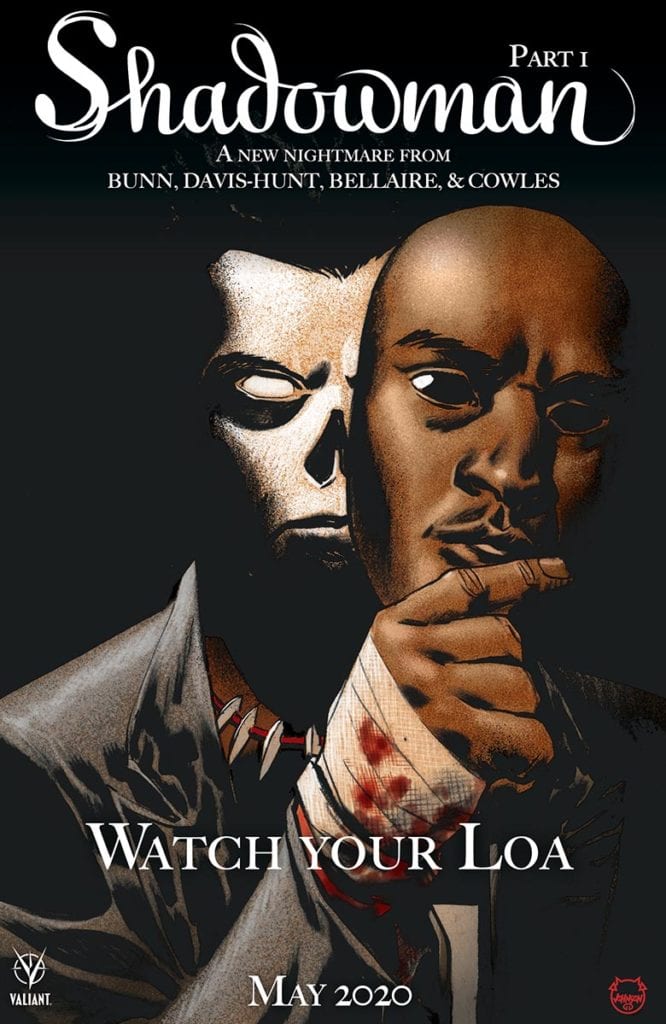