Panda Mony’s company president Ryan Magnon was at C2E2 this past weekend and he talked with Monkeys Fighting Robots about its toy franchise Alter Nation and unique style of marketing.

Panda Mony is an up-and-coming toy company looking to entertain kids through a new franchise, Alter Nation. To get the word out Magnon entertains a few techniques including a partnership with Dark Horse Entertainment. The preview issue is available in select comic stores or with online vendors like Comixology. Detailing the adventures of a military group of genetically altered soldiers chasing cryptids and conspiracies; Magnon hopes to make his franchise equivalent to ones like G.I. Joe and TMNT. But Coppa has been cracking down on websites that use cookies to collect kid’s data. Not to mention the main demographic of comic stores are over the age of 18. So how does Panda Mony go about this? At C2E2 I ask Magnon that.

MFR: On Panda Mony’s website your motto is to give the kids of today equivalents of the figure lines of decades prior. What are your strategies to reach them? Given the stricter control on social media including but not limited to Coppa.

Magnon: Coppa doesn’t have regulations on typical forms of advertising like book fairs or US mail. We can still provide content on YouTube just not collect their information. Also, we try to spread to retailers by getting the word out through cons like this and previously mentioned.

MFR: Bouncing off of that, how does Panda Mony plan to spread its brands to the general public if the availability is in very limited areas like select stores in states? I for one only found Alter Nation by chance twofold. The preview comic from Comixology and word of mouth from my friend who collects figures.

Magnon: Those stores on the website don’t necessarily mean all of the stores we have on call. Like I said before we try to spread the word out like our partnership through Dark Horse, which will be releasing a graphic novel. While kids don’t necessarily go to comic book stores, they do still visit book stores like Barnes and Nobles and book fairs. We also have our webisodes on our website and YouTube channel, which again we can still have despite the Coppa laws. We’re also in talks with animation and production studios for an all-ages TV series to reach the public.

MFR: A friend of mine likes the quality of Panda Mony’s figures. Who judges the designs and personalities that go into the figures?

Magnon: I do actually while Curtis and the rest of the team play their parts. We interview kids through surveys on subjects like what’s their favorite animal and what kind of characters they like. Afterward, we use their feedback to make characters those kids and others would like.

MFR: In the exclusive comic preview of Alter Nation, I could not help but notice the similarities between franchises like GI Joe, TMNT, and X-Men. With those franchises having such large followings that continue today; how do you plan to make Alter Nation stand out?

Magnon: All series and franchises actually have some similarities. Star Wars, for example, was inspired by Flash Gordon and I’m sure Flash Gordon had other inspirations. As for Alter Nation, while it kind of is X-Files with superpowers, we try to give it an angle that those series never tried before. In Alter Nation while we do have similarities with TMNT and X-Men we have a real focus on conspiracy theories.

MFR: With everyone on screens just about anyone can join in on that front.

MFR: Do you and the Panda Mony team have favorite characters?

Magnon: Curtis likes Sabotage since he came up with the villain. As for me, I like them all but I hold a special place for Albert VII with all the accessories he can come with.

MFR: Ryan, thank you for your time and best of luck with Alter Nation! 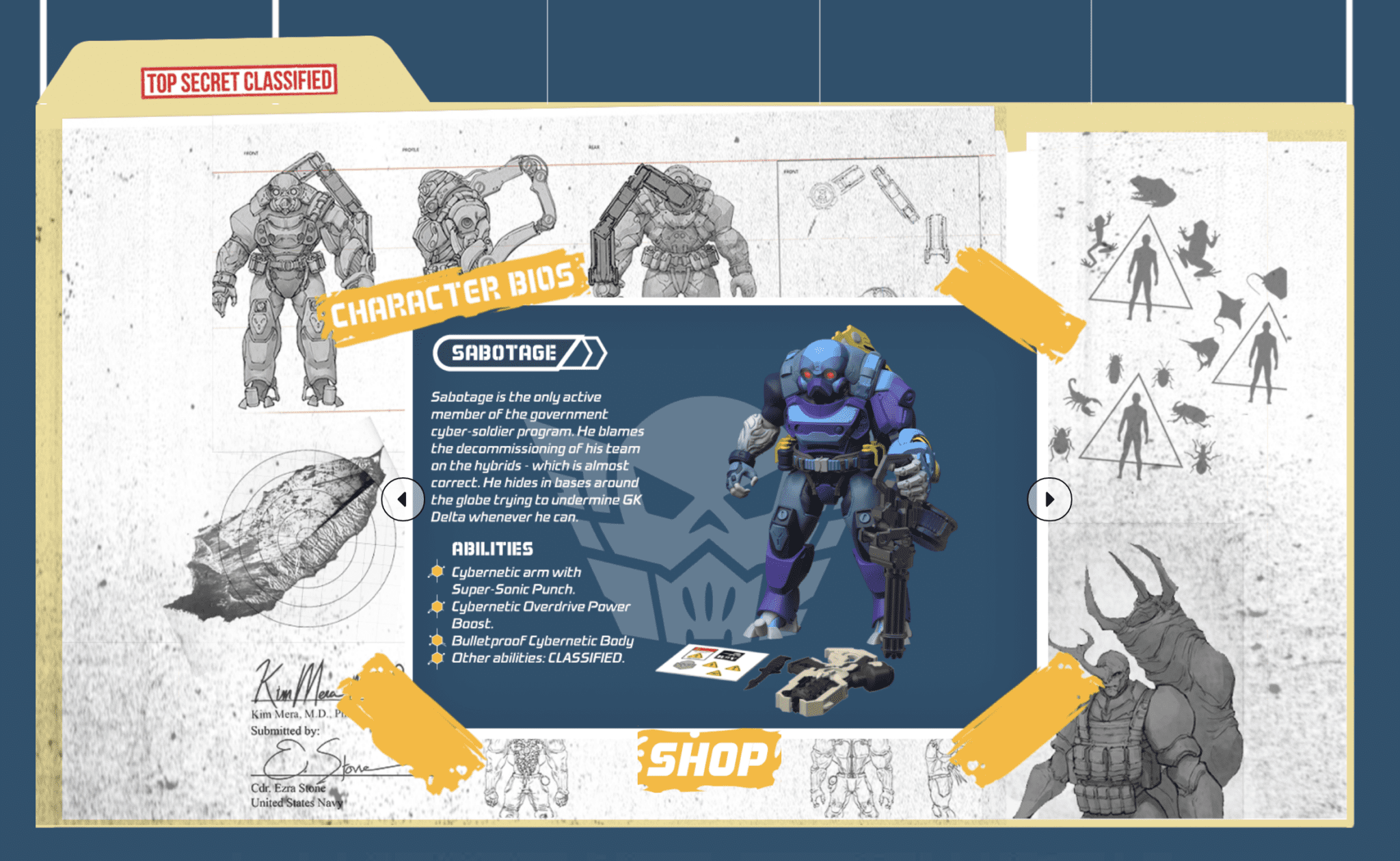 About Alter Nation: The Mystery of Whining Winny:
The GK Delta team is the only line of defense against threats that normal humans can’t stop. Join the team as they’re dispatched to Nevada where it’s rumored that a monster is menacing locals and this monster may be the newest member of the team. If not, GK Delta will be trapped between this new monster and the townspeople they need to save. Written by Tim Seeley (Grayson, G.I. Joe: A Real American Hero), illustrated by Mike Norton (Battlepug), colored by Allen Passalaqua (Battlepug), and lettered by Crank!

The Alter Nation: The Mystery of Whining Winny original graphic novel will hit your local comic book store this fall.