BATMAN ANNUAL #5: Hope Is Found In The Grotesque

Tynion thankfully takes steps to introduce readers to Leslie Thompkins, Batman’s childhood caretaker. By juxtaposing Leslie’s presence and influence in Crime Alley, readers see her parallel with Batman. While Batman prefers to strike fear into criminals’ hearts, Leslie hopes to rehabilitate people by helping them work out their issues properly. This leads her to the main element of Batman Annual #5, the Clownhunter.

Leslie serves as an intersection for Bao Pham in his criticism of Batman. Like Bao, she thinks Batman isn’t doing what he is supposed to do while also disagreeing with Bao’s slaughter of clowns. Leslie empathizes with Bao’s struggles with the absurdities surrounding Gotham and Batman. Because needing to make sense in the absurd is a very human thing to do.

These struggles with identity and finding someone to bounce off make both Leslie and Bao good characters. It’s the interactions between different parties that can lead to greater developments. I certainly want to see where the Clownhunter goes after this. 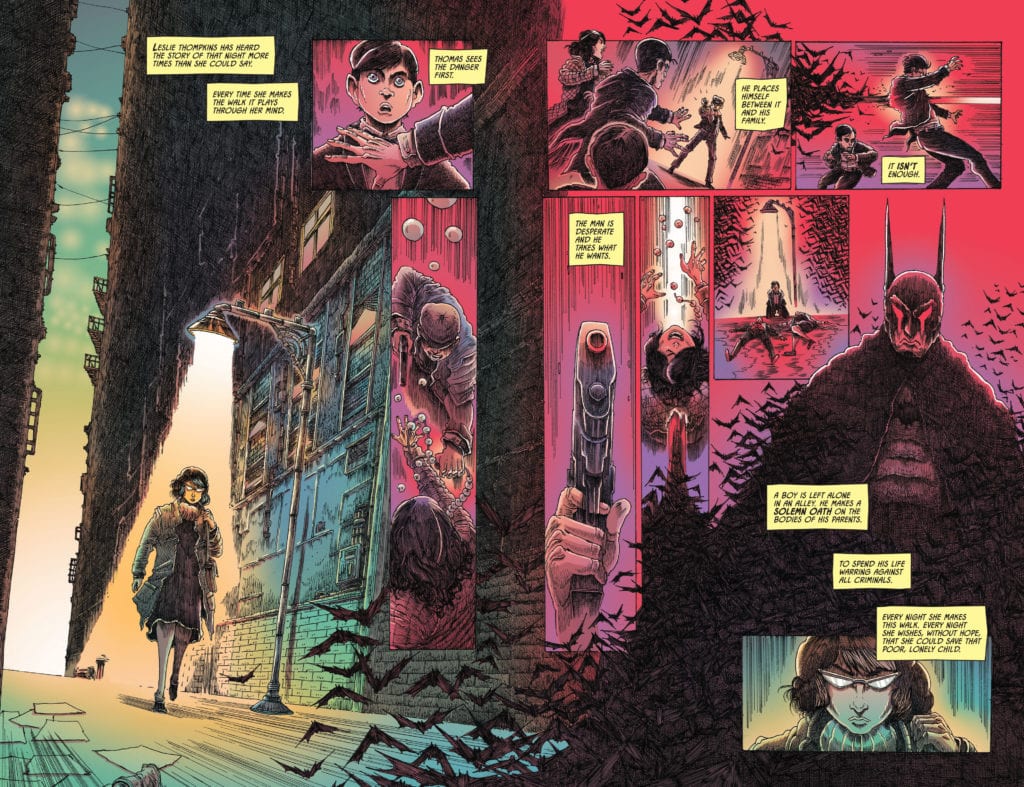 Stokoe’s art returning from Joker War Zone fits perfectly into Batman Annual #5. The inherent absurdity of Gotham City can feel like a walk through Hell, and Stokoe’s grotesque imagery displays that in full. That is certainly what Bao’s perspective has when it comes to his family’s murder.

At the same time, Stokoe’s art showcases a cooler colored glow that displays some hope in dark places. It’s something that comes to a head when Bao removes his red-accented helmet to speak with Leslie under this glow.

Cowles’ lettering showcases how characters speak under the circumstances. Most of the characters speak in an easy to follow format through the standard word balloon. Then there’s the Clownhunter who speaks in lowercase font, unlike his younger self who spoke like most people. It displays his trauma and how small he feels after encounters in the main comics.

The use of SFX from Cowles even showcases Bao’s transformation into the Clownhunter. Bao’s flashbacks have rather simple effects like knocking on a door until, eventually, Stokoe’s SFX takes over with how over-the-top they get. Every crack and crash gets as absurd as the situations they’re in.

Batman Annual #5 takes itself a step further by showcasing character development. By clashing one of the newer characters with an old but important one, a compromise is found. It’s almost like Batman’s fans, and critics find common ground by learning to live with the absurdities. Because living with that instead of against it might just be healthier. The Clownhunter is certainly a character to invest interest in his origin story.

Batman Annual #5 highlights the paradoxes of Batman and the ability to live in the same as him. When rules seem to change on a whim, Stokoe's artwork brings both catharsis and genuine hope.BATMAN ANNUAL #5: Hope Is Found In The Grotesque