Review: BATMAN ’89 #1 Brings Us Back to Burton’s Universe

The Legend of Batman Continues

In 1989, Tim Burton’s Batman was released to the world and took it by storm. Despite there being pushback by comic fans for casting, the box office exploded with $40 million, nearly making back its budget. The film has since gone down as a cornerstone of Batman media and superhero movies in general. Jump to 2015, while the Batman ‘66 comic was selling well, Joe Quinones pitched the idea of continuing the universe of Batman ‘89. While originally rejected, the idea was resurrected in 2019 and two years later is finally in our hands. So has the legendary Burton Batman returned? 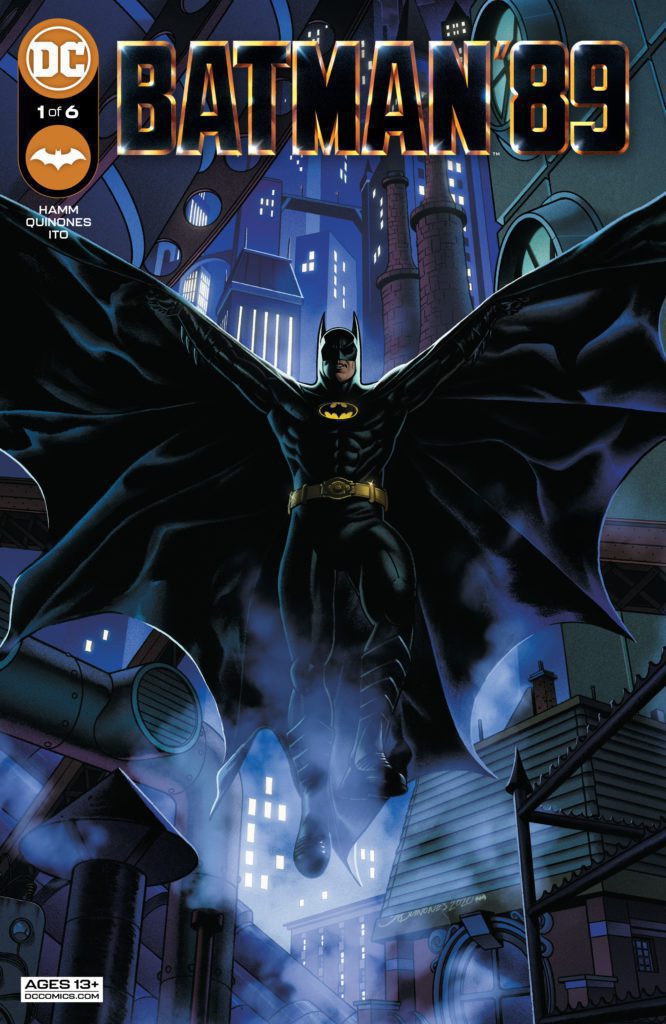 We open on October 31st, where Harvey Dent is out with his girlfriend, Barbara Gordon. They are having dinner just as a gang inspired by the late Joker begins a heist outside their restaurant. It doesn’t take too long for the city to erupt into chaos and for Batman to swoop in. After an exciting Halloween night, Harvey begins questioning why Gordon is allowing Batman to run rampant. While Barbara goes to find evidence in the police station, Dent speaks to Bruce Wayne to get him on his side. Dent also proposes the idea that Batman couldn’t be doing all he does alone. Overall this first issue felt like a good first step back into this old universe. I’m interested in all the characters, especially with Harvey Dent. While we didn’t get too much of him in the original movie, you get that justice-seeking nature that Harvey is known for mixed with the charm of Billy Dee Williams. Another character that took me by surprise was Barbara Gordon. This isn’t the teenager that we see latch onto the Batman ideology. This is a grown woman on the same level as Harvey in wanting to take down Batman. I’m not sure how I feel about her at the moment, as honestly, she feels more like Renee Montoya than Barbara, but we’ll see how she plays out.

The action sequence in the comic was actually exhilarating. Batman taking on the Joker gang felt like an excellent opening scene, with explosions, grappling lines, and hiding behind a giant penny from gunfire. Even Harvey had a chance to show some moves, as well as the dark side lying beneath the friendly exterior. If the action continues to be this exciting, we’ll be in for a thrilling ride. 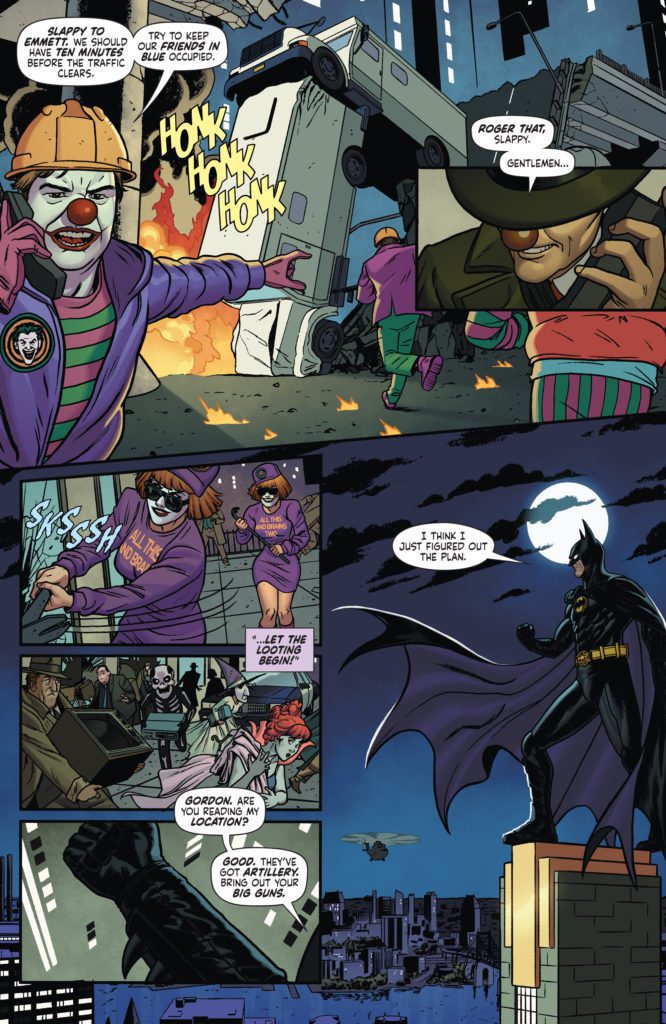 Joe Quinones is the illustrator of the series, and his work is fantastic. While we might not get the gothic designs of Burton’s Gotham, the characters really pull us into this world. Bruce, Alfred, and Harvey look incredibly close to their movie counterparts, with some small changes to detail how much time has passed. Along with that, the Joker Gang looks amazing, capturing the Burton Joker look while keeping it youthful as this is a new generation after the Joker’s passing. There is one last design that really translated well, but I’ll leave that a surprise for comic readers, but know it was a long time coming.

Overall, this first step back into Burton’s Batman was a nice one. It doesn’t overwhelm readers with exposition and lays the groundwork for the story. The characters are all well written. Even Barbara has good lines that make you have a grasp of the character. The art is well done and really will bring readers into the world. I can already tell that this story is going to tug on nostalgic heartstrings. You can already see it with Harvey. That said, I can’t wait to see where this story goes.

Batman '89 #1 is an excellent reintroduction into Burton's universe, with fantastic art and characters.Review: BATMAN '89 #1 Brings Us Back to Burton's Universe